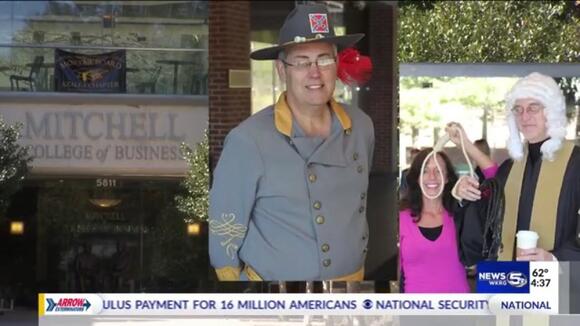 MOBILE, Ala. (WKRG) — Two University of South Alabama faculty seen in “racially insensitive” photos will return to work at the school, according to a statement from the university. USA launched an investigation in 2021 into photos that showed one professor wearing a Confederate uniform and another posing with a whip and a noose at an on-campus Halloween party in 2014.

Bob Wood and Alex Sharland were accused of wearing “unacceptable” costumes in the workplace. Wood went to the costume contest wearing a Confederate soldier uniform and Sharland went as a “hanging judge,” carrying a noose and whip as props.

USA said “an independent, external investigator” conducted the investigation, with “a diverse group of faculty, staff and students representing those who had expressed concerns served in the role of Complainants under the Equal Opportunity/Equal Access policy” of the Faculty Handbook. USA said it was the “unanimous conclusion of the Complainants” that Wood return to work “while engaging in the activities outlined below which are consistent with principles of restorative justice”:

During the investigation, Wood said he decided to go to the costume contest “last minute.” He said the Confederate costume was one of the only ones left at the costume store. In an apology statement, Wood said, “In October 2014, I made a last-minute, ill-thought-out decision to rent a costume for a faculty, staff, and student Halloween contest held in the Mitchell College of Business. Regardless of how mindlessly I chose that costume, I sincerely apologize to everyone for doing so.”

“My actions occurred almost eight years ago, at a time when many Americans, including myself, were not as attuned or sensitive to the symbols of the Confederacy or to their underlying meanings,” said Wood. “My choice of costume was in no way intended to be hurtful.”

Sharland, who is British, wore a black robe and white barrister’s wig similar to what British judges used to wear. Sharland also sported a whip and noose, which he claimed was to signify that he was dressed as George Jeffreys, the British “hanging judge” from the 17th century.

Faculty, academic administrators and a student served on the committee tasked with investigating Sharland’s actions. The committee’s unanimous determination was that Sharland’s costume “did not violate the policy but was unacceptable in the workplace,” according to USA’s statement. The committee recommended “an admonishment not to repeat the conduct and participation in an educational program addressing discriminatory and harassing conduct.”

Sharland will return to work. Wood’s full apology is attached below.

WKRG News 5 first broke this story in March 2021 . We spoke with current and former students and campus leadership, including USA president Tony Waldrup. At the time, former president of USA’s NAACP Chapter Jason Barnes said he was not surprised.

“It’s disappointing; however, it’s not surprising,” said Barnes. “I think about Black students particularly. All minorities on the campus, but particularly Black students, because that noose obviously has a direct correlation with Black people as it pertains to violence against them, especially racialized violence and terror.”

You can stay ahead of all breaking and local news across the Gulf Coast . To get the latest news from Mobile , Baldwin County and Pensacola , download the WKRG News 5 News App , and be sure to turn on push alerts .

SPANISH FORT, Ala. (WKRG) — Spanish Fort High School is one of five South Alabama schools receiving national recognition for its academic success. Great Schools, a non-profit organization, documents academic progress for schools across the country. According to the non-profit, Spanish Fort High School is above the state average when it comes to preparing students […]
SPANISH FORT, AL・2 DAYS AGO
WKRG News 5

BAY MINETTE, Ala. (WKRG) — Officials with the Bay Minette Police Department said their officers are investigating a shooting that happened at a business early Sunday morning. According to officers, a woman came into the Bay Minette Police Department to report a shooting. The woman said she and another woman got into a fight with […]
BAY MINETTE, AL・8 HOURS AGO
WKRG News 5

A Daphne teenager is behind bars in Fairhope accused of making threats of violence against students at St. Michael Catholic High School.
FAIRHOPE, AL・2 DAYS AGO
WKRG News 5

MOBILE, Ala. (WKRG) — Officials with the Mobile Police Department have announced they are investigating a homicide that occurred on Saturday, Sept. 24. Officials said around 8 p.m. Saturday, officers were called to M&M Food Mart after receiving reports that one person had been shot. When officers arrived, they found a 27-year-old man who had […]
MOBILE, AL・10 HOURS AGO

FAIRHOPE, Ala. (WKRG) — An evening of live entertainment, silent auction of original artworks and good fellowship at the Eastern Shore Art Centre in Fairhope provides a financial boost for teenage girls on the gulf coast with limited resources. Flourish Féte participants raised $15,000 for The Flourish Community Center in Daphne. The non-profit organization, founded […]
FAIRHOPE, AL・2 DAYS AGO
WKRG News 5

PENSACOLA, Fla. (WKRG) — The annual Pensacola Seafood Festival is back with over 150 vendors supplying food fun and music. The event would not be possible without the 400 volunteers participating with Fiesta Pensacola. Fiesta Pensacola works to put on events in the community highlighting heritage and Pensacola pride. The volunteers attend meetings before the […]
PENSACOLA, FL・2 DAYS AGO
WKRG News 5

ESCAMBIA COUNTY, Fla. (WKRG) — With the Escambia County Board of Commissioners voting to remove Larry Downs Jr., from its Contractor Competency Board on Thursday, the county is now looking for a volunteer to fill the spot. The duties of the CCB include accepting contractor applications, administering contractor examinations, and issuing and recording Certificates of […]
ESCAMBIA COUNTY, FL・2 DAYS AGO
WKRG News 5

PRICHARD, Ala. (WKRG) — Officials with the Mobile Police Department said they are investigating a stabbing that took place at a gas station on Sept. 23. Officers said they were called to the Pride Gas Station on St. Stephens Road after receiving reports of a person being cut. When they arrived they found a 31-year-old […]
MOBILE, AL・1 DAY AGO
WKRG News 5

ESCAMBIA COUNTY, Fla. (WKRG) — An arrest has been made in regard to a domestic violence-related homicide that happened Friday, according to officials with the Escambia County Sheriff’s Office. Adolph Gable, 39, was charged with second-degree murder. Upon arrival to the 700-block of Truman Avenue, deputies said an adult female victim with stab wounds was […]
PENSACOLA, FL・1 DAY AGO
WKRG News 5

MOBILE, Ala. (WKRG) — Whether it’s drugs or alcohol, people were celebrating addiction recovery with a special event in Mobile. A cannon blast starts the walk–Walkers made their way through downtown Mobile–westward on Government Street with a police escort–each step is part of this group’s story of facing addiction with family or loved ones. This […]
MOBILE, AL・1 DAY AGO
WKRG News 5

ESCAMBIA COUNTY, Fla. (WKRG) — Officials with the Escambia County Sheriff’s Office said they are investigating two deaths that happened on Sept. 24. Deputies said they responded to Jardine Road and Rowland Court after receiving reports of a shooting. When they arrived, they located a man who was dead from a gunshot wound. Investigations revealed […]
ESCAMBIA COUNTY, FL・13 HOURS AGO

MOBILE, Ala. (WKRG) — A 25-year-old mother disappeared under mysterious circumstances. 10 months later, her car was found in a body of water in Saraland. Her remains were found inside the recovered car. During the investigation, her car ended up on a Ukrainian car auction website, where it sold for $25. Four years later questions […]
SARALAND, AL・1 DAY AGO
WKRG News 5

MOBILE, Ala. (WKRG) — Faith Time is our weekly conversation on matters of Faith, joining us this morning is Rabbi Steven Silberman with Ahavas Chesed Synagogue. Rosh Hashanah begins at sundown and we wanted to talk about Jewish traditions, particularly, what does it mean to keep kosher? Guest: Kosher is a Hebrew word, which means […]
MOBILE, AL・11 HOURS AGO
WKRG News 5

Crescent Theater may not be closing any more

MOBILE, Ala. (WKRG) — Downtown Mobile’s favorite theater may not be closing anymore following an outpour of community support. The Crescent Theater off Dauphin Street was supposed to close on Oct. 1, and after the news broke, people expressed their concerns on social media. Max Morey is the owner of the Crescent Theater. Morey told […]
MOBILE, AL・2 DAYS AGO
WKRG News 5

Tangipahoa detectives have identified a man believed to be connected to a home invasion that killed a man and left his 12-year-old daughter critically injured earlier this month. Anyone who knows where Omarion Hoofkin is or has any other information related to the investigation is urged to contact the TPSO at 985-345-6150.
MOBILE, AL・2 DAYS AGO

IRVINGTON, Ala. (WKRG) — A family in Irvington is beset by tragedy for the second time in a few short years. Four years after the Willis family lost their home in a fire, they recently lost a young father to aggressive brain cancer. It’s hard to know what to say when you’ve lost the one […]
IRVINGTON, AL・9 HOURS AGO
WKRG News 5

ESCAMBIA COUNTY, Fla. (WKRG) — Deputies were to the Escambia County Jail on Thursday morning for a possible fentanyl overdose. Deputies said an inmate was found unresponsive in his cell on Thursday, Sept. 22. Deputies said during their investigation, they found fentanyl inside the cell, but cannot confirm if the overdose was from the drug. […]
ESCAMBIA COUNTY, FL・2 DAYS AGO
WKRG News 5

Mobilians ‘thinking outside of the box’ to help homeless population

MOBILE, Ala. (WKRG) — A month ago, the homeless camp in Tillman’s Corner was cleared by city officials because of complaints from the community, removing one less place for homeless people to live. Now, some Mobile citizens are taking a new approach to helping the homeless. Eric Overstreet and Colby Benefield are going homeless on […]
MOBILE, AL・2 DAYS AGO