Two accused of keeping woman in dog cage; man charged with raping her, another woman 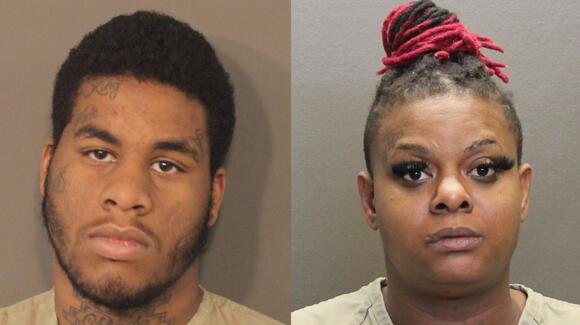 One of the victims was kept in a dog cage for two days, according to court documents. A man and woman are in custody after a barricade situation led to the discovery of a woman being kept in a cage in the Franklinton area.

Isabella Kalua's sister told an investigator that her mouth and nose had been duct-taped and that she'd been locked in a dog cage and left to die.
HONOLULU, HI・1 DAY AGO
WLBT

BILOXI/WEST POINT, Miss. and ATLANTA, Ga. (WCBI) – A Biloxi woman is charged in the shooting death of a woman from West Point – and the crime happened near Atlanta. West Point Police Chief Avery Cook says his office was contacted by investigators in Smyrna, Georgia after 24-year-old Shai’Khia Strong was found dead in a hotel room.
WEST POINT, MS・13 DAYS AGO
Newsweek

"This is a grandmother and a grandchild," said Denton Police Officer Allison Beckwith. "That's not a case we see very often."
DENTON, TX・1 DAY AGO
FOX59

A Pendleton man is accused of breaking into a woman's home, beating her and trying to drag her into his car.
PENDLETON, IN・6 DAYS AGO

Man charged for shooting woman and leaving her in a ditch

NASHVILLE, TN (WSMV) - Metro Police have charged a man they say shot a woman and left her in a ditch in early January. Police charged 40-year-old Charles Alonzo Gipson with attempted murder after taking him into custody at an apartment complex on Heritage Drive. Police say Gipson shot a woman the night of January 10th and left her in a ditch on Knight Drive.
DAVIDSON COUNTY, TN・4 DAYS AGO
wpsdlocal6.com

MURRAY, KY — A Murray, Kentucky, man has been arrested on an attempted murder charge after police say he shot a woman in an apartment on Broad Street. The Murray Police Department says it received a 911 call reporting the shooting around 5 p.m. Monday. When officers arrived, the police department says, they found 22-year-old Noah Bechard sitting outside the apartment. Inside, they found 24-year-old Caitlin Casey. She had a gunshot wound, and she was taken to Murray-Calloway County hospital.
MURRAY, KY・8 DAYS AGO
Orlando Sentinel

Florida man and woman accused of starving dog to skin and bones: report

A Florida man and woman face animal cruelty charges after allegedly starving a dog until it was skin and bones. Citrus County sheriff’s deputies arrested the Dunnelon couple on Jan. 4, according to WKMG. An arrest affidavit says Roberto Sanchez, 21, and Danni Kesler, 29, tied a dog up in their backyard without food or shelter. Deputies described the dog as so thin that almost every rib and ...
ORLANDO, FL・14 DAYS AGO
FOX 23 Tulsa KOKI

KANSAS CITY, Mo. — A Kansas man is accused of killing a woman and severely beating her 4-year-old daughter, authorities said. Jose E. Escalante-Corchado, 28, of Kansas City has been charged with first-degree murder, armed criminal action, assault to a special victim and child endangerment, according to The Kansas City Star.
KANSAS CITY, MO・6 DAYS AGO

DECATUR, Ga. — Decatur police have issued arrest warrants for a 20-year-old man who they believe kidnapped and shot a woman on Dec. 30. They released video of the incident on Jan. 6. with the hope someone could help them identify a suspect. [DOWNLOAD: Free WSB-TV News app for...
DECATUR, GA・12 DAYS AGO
Southern Minnesota News

Charges: Woman woke up to find man recording her in her bedroom

A man is accused of breaking into a woman’s Mankato apartment and recording her as she slept. Gabriel Mesfin, 20, of Mankato, was charged Wednesday in Blue Earth County Court with felony first-degree burglary and gross misdemeanor interfere with privacy. A criminal complaint says the woman woke up just...
MANKATO, MN・3 HOURS AGO
Your Radio Place

ZANESVILLE, Ohio – A Zanesville woman who shot and killed a dog at a local campground will spend 18 months in prison. 61-year-old Patricia Dyer was sentenced Monday on charges of burglary, tampering with evidence, and prohibitions concerning companion animals. Dyer was the manager at a local campground. Reports...
ZANESVILLE, OH・2 DAYS AGO
KATU.com

SEATTLE - On Thursday, the King County Prosecuting Attorney’s Office filed four felony charges against Chaz R. Butler, 33, who is accused of taking an 18-month old child from her mother and pushing the mother and another woman into Lake Washington Monday. Prosecutors charged him with Attempted Robbery in...
SEATTLE, WA・6 DAYS AGO
FOX 56

Corbin man charged after holding woman against her will

A Corbin man was arrested after officers responded to a complaint of a female being held against her will on Friday, Jan. 21.
CORBIN, KY・2 DAYS AGO
BBC

FREDERICKSBURG, Va. (WWBT) - Fredericksburg police arrested two men accused of forcing a woman to take drugs at gunpoint and raping her. Police said the suspects knew the woman and held her at gunpoint inside her apartment on Jan. 19. The victim managed to escape the apartment the next day.
FREDERICKSBURG, VA・6 DAYS AGO
wymt.com

Police: Man arrested on several charges, accused of holding woman against her will

KNOX COUNTY, Ky. (WYMT) - One man is facing charges following an altercation at a home in Corbin. On Friday, Knox County deputies responded to a home on KY 1232. When they arrived, they witnessed a man trying to escape out the back door. They quickly took the man, later...
KNOX COUNTY, KY・2 DAYS AGO
news4sanantonio.com

ON THE RUN: Man accused of hitting woman in the head and dragging her into the street

GRAYSON COUNTY, Texas (KXII) - A Denison man is accused of beating a woman after nearly hitting her with his car, and then running from police. The Grayson County Sheriff’s Office said that it all started when 51-year-old Daniel Frazier assaulted and choked a woman at a home on Sycamore St.
DENISON, TX・2 DAYS AGO
mountain-topmedia.com

PIKEVILLE, Ky. — Two Pikeville men are in jail after being accused of robbing a woman as she sat in her car at an apartment complex. Pikeville Police were called to Peachtree Apartments Thursday night, after the woman reported being assaulted. Police say 42-year-old Keith Little came out of...
PIKEVILLE, KY・12 DAYS AGO
explore venango

Case Moves Forward Against Man Accused of Hitting Woman, Attempting to Shove Her Head in Toilet

FOREST CO., Pa. (EYT) – A case against an area man who allegedly struck a woman in the face and attempted to stick her head in a toilet during a domestic dispute in Harmony Township moved forward in court on Tuesday. Court documents indicate the following charges against 40-year-old...
FOREST COUNTY, PA・6 DAYS AGO