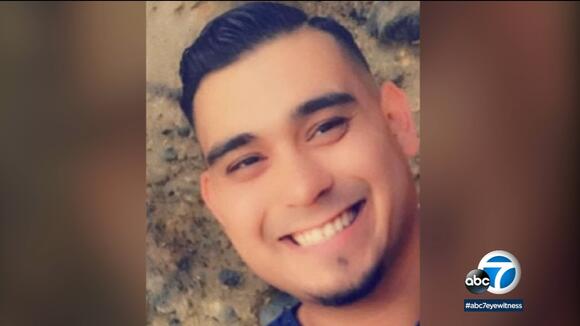 It's been more than a month since a 29-year-old man was found dead inside a Riverside County jail, and his family says they still don't have any concrete answers as to what happened. "Nobody's giving us any statements," said the man's mother, Lisa Matus. "Nobody's saying anything." Her son, Richard Matus Jr., was in jail awaiting trial on attempted murder and robbery charges in connection to a shooting at a dispensary in Banning in June 2018. His brother, Raymond Matus, is still in jail awaiting his trial on charges stemming from the same incident. Matus' family has filed a wrongful death claim against Riverside County, alleging "record-breaking jail deaths in 2022." Matus died on August 11 at the Southwest Detention Center in Murrieta. "We're here today to announce that lawsuit against the county of Riverside to raise awareness to what's going on in this county," said attorney Christian Contreras. "Individuals in jail, innocent until proven guilty, should not die under mysterious circumstances." But Riverside County Sheriff Chad Bianco said there's no mystery surrounding the death of Matus, saying the preliminary cause of death is a fentanyl overdose. "We are not going to settle this, we will fight this to the end," said Bianco. "We did nothing wrong. He chose to do drugs while in custody, and unfortunately, we were not able to revive him when he overdosed." Bianco said 13 inmates have died in Riverside County jails in 2022. He said one death was a homicide, two were suicides, three were deaths related to medical complications and five deaths were from fentanyl overdoses. The cause of death for two of the inmates is still pending. "Fentanyl is in our jail system, and they keep smuggling it in, and they keep using it. We're doing everything we can to save their lives, and unfortunately, we can't save all of them," said Bianco. Bianco said on average, nine inmates die each year in Riverside County jails, so he acknowledges this year the death rate is above average. Compared with the 13 deaths in Riverside County jails, officials in San Bernardino County say so far this year, 16 inmates have died inside their jail system. Bianco said the five fentanyl-related deaths reported in his jail system this year is a new record. "We are educating (inmates on fentanyl use). We are providing them documentation, we're making them sign wavers that say fentanyl kills, and to not use drugs in jail, but yet they still do," he said. Bianco said despite the preliminary determination of a fentanyl overdose, they're still awaiting an official cause of death. However, the Matus family attorney says they don't believe it was drugs. "Something is up. Something is wrong," said Contreras. "Something needs to be done to insure more people who are innocent until proven guilty don't die in these jails."

And it wasn't wrongful that both sons stabbed and robbed some people??? The nerve of some people. If they win this lawsuit, I hope they are forced to give all to their victims.

Both brothers are in there for murder? Hum! Jail and prison is not a fun a place, the CO’s are not doctors. You go in there high as a kite and don’t tell the nurse when you go into intake that’s on you! How are the CO’s supposed to watch the inmates every move when they are high or when an inmate smuggles in drugs? The deputies and CO’s can’t be blamed for everything! The criminals have to be responsible for their own actions! If they weren’t convicted of murder they wouldn’t be there!

I hope this doesn’t turn into this wonderful sweet boy that would never do something bad. He was a great son…etc. and all the family wants is several millions of $ to forget about it. I don’t know how he died but I see a problem on the horizon.

Riverside County sheriff's deputies shot and killed a 33-year-old man diagnosed with schizophrenia after they say he came toward them with a spike-tipped baseball bat.
MORENO VALLEY, CA・8 HOURS AGO
ABC7

The family of a double amputee who was fatally shot by Huntington Park police held a march Sunday to demand justice and hold officers accountable.
HUNTINGTON PARK, CA・19 HOURS AGO
ABC7

Authorities are looking for a Beaumont man who allegedly doused his partner in lighter fluid and set her on fire.
BEAUMONT, CA・17 HOURS AGO
ABC7

Torrance police arrested a man for allegedly trying to strip copper from the rooftop of a business. Police credit their drone for spotting the suspect after the alleged theft.
TORRANCE, CA・10 HOURS AGO
ABC7

Officials searching for inmate who walked away from LA reentry program

Huntington Park police have released new video footage in the case of a double amputee who was fatally shot after stabbing one man and threatening to throw his knife at officers.
HUNTINGTON PARK, CA・13 HOURS AGO
ABC7

Police arrested a Las Vegas man for allegedly holding a pregnant woman at gunpoint and stealing her two French bulldogs in Studio City. LAPD said they used information from a dating website to find him.
LOS ANGELES, CA・6 HOURS AGO
ABC7

Chase suspect loses control of car on 405 Fwy, attempts to carjack truck before tackled by officers

A chase involving a possible murder suspect ended after the driver lost control of the car on the 405 Freeway, then tried carjacking a truck.
LOS ANGELES, CA・14 HOURS AGO
ABC7

"They need to be in jail because they was not supposed to kill my husband." Takar Smith's widow is calling for justice in the fatal LAPD shooting.
LOS ANGELES, CA・1 DAY AGO
ABC7

Three people were killed and another hospitalized after a crash involving a driver who was fleeing from police, authorities said.
LYNWOOD, CA・1 DAY AGO
ABC7

A 3-year-old boy has been found and his non-custodial mother arrested after she allegedly abducted him, prompting a search, Riverside police said.
RIVERSIDE, CA・1 DAY AGO
ABC7

Sayvee is with her parents, Breanna Torres and Oscar Morales, who are concealing the baby and their whereabouts, according to the sheriff's department.
LA PUENTE, CA・2 HOURS AGO
ABC7

Police are seeking the public's help in identifying the man who brought a human jawbone into a San Bernardino station and left it there.
SAN BERNARDINO, CA・3 DAYS AGO
ABC7

More businesses have been targets of burglaries in Long Beach. Police are looking into whether they're related to last week's string of burglaries.
LONG BEACH, CA・10 HOURS AGO
ABC7

"We want some peace of mind." An Inland Empire family has been waiting five years for the trial of the man accused of killing a 37-year-old mother.
RIVERSIDE, CA・4 DAYS AGO
ABC7

Man charged with murder after doctor struck by car, stabbed while on bike ride in Dana Point

A 39-year-old Long Beach man was charged Friday with murder in the killing of a bicyclist in Dana Point.
DANA POINT, CA・3 DAYS AGO
ABC7

A Huntington Beach police officer who died in a helicopter crash last year was honored Saturday with his own memorial highway sign.
HUNTINGTON BEACH, CA・2 DAYS AGO
ABC7

A man sued Los Angeles County, alleging he was wrongfully battered by sheriff's deputies when he found himself incidentally in the middle of a wild televised chase.
LOS ANGELES COUNTY, CA・4 DAYS AGO
ABC7

Disbarred lawyer Tom Girardi had not guilty pleas entered on his behalf Monday on charges he embezzled millions of dollars from some of the massive settlements he won for clients during a once prominent career.
LOS ANGELES, CA・5 HOURS AGO