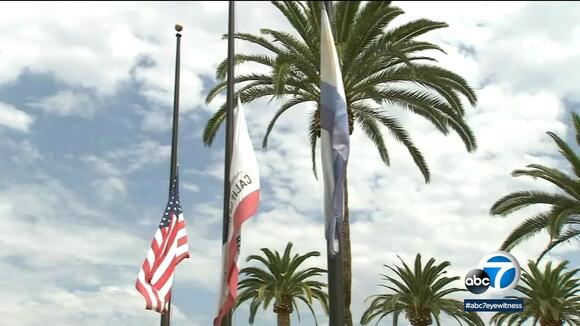 A local real estate developer and two mayors are urging San Bernardino County to secede from California. If successful, the improbable plan would establish the first new state since Hawaii was granted statehood in 1959. On Tuesday night, Rancho Cucamonga businessman Jeff Burum asked the San Bernardino County Board of Supervisors to put an advisory measure on the November ballot. "It's time for our citizens to stand up and say enough is enough," he said. Burum wants the county to be turned into a new state, possibly named "Empire." He criticized state officials as being ineffective and disconnected from the needs of people in the Inland Empire. "Our judges are constantly taxed with too much, with not enough resources," Burum said during the public comment section of the Board of Supervisors meeting. "The state of California continues to allocate resources to the high-cost areas to our detriment and other Inland Valley communities. It's time to stop it. It's time for our citizens to stand up and say, 'Enough is enough.'" The mayors of Fontana and Upland both spoke in favor of the longshot plan. "They act like we don't exist," said Fontana Mayor Aquanetta Warren. "We are the economic engine of the state, and you need to pay attention to that." She urges officials to look at the booming warehouse industry, for example, and the efforts by some in the State Legislature to try to stop it. "We're the goods movement, pay attention to that," she said. "Don't try to penalize us because we're moving the goods of the nation." As far as population, San Bernardino County has almost 2.2 million people. If it were to become its own state, it would be more populous than 15 other states in the country. But is seceding from California a pie-in-the-sky idea? "It's not practical," said Claremont McKenna College Professor of Government Jack Pitney. "It's just not going to happen." He said there's a lot that supporters of the idea might not be thinking about. "It's one thing to say we should manage things ourselves, it's another thing to pencil it out," said Pitney. "For one thing, education. If you live in San Bernardino County, you might want to go to UCLA or Cal State Long Beach and get in-state tuition. If San Bernardino County becomes its own state, that's not possible anymore. Every state has its own national guard, so the new state would have to figure out how to do that. Transportation and infrastructure, no more Caltrans ... it adds up very quickly." Even if San Bernardino County voters were to approve secession, the state Legislature and U.S. Congress would still have to approve it. "The political side is this county would be much more likely to elect Republicans to the U.S. Senate, which means that it's dead on arrival with all the Democrats currently in control of the Senate." Still, Burum wants San Bernardino County residents to have the chance to vote on it themselves. "I promise you, you will get an affirmative vote," he said. To get the item on the ballot by this November, the Board of Supervisors would, at the very latest, have to vote on it at the next meeting. As of Wednesday, there's nothing about it on the agenda.

the Russians did such a good job using social media against us. now here are the results of that. and it's just getting worse.

Southern California could withstand some impacts of potential recession

The last three years have been the driest in California's history. Water agencies across the state are concerned about possible shortages for next year and beyond.
CALIFORNIA STATE・2 DAYS AGO
ABC7

Video from the department shows recruits being welcomed back to cheers by members of numerous agencies from across Southern California.
WHITTIER, CA・14 HOURS AGO
ABC7

As the holiday season kicked off, drivers in California braced to keep paying more than others across the country at the gas pump and the California panel held a hearing to find out why.
CALIFORNIA STATE・3 DAYS AGO
ABC7

Video: Truck tumbles over side of freeway in Santa Clarita, lands on wreckage from earlier crash

Video shows a truck tumble over the side of a rain-soaked freeway in Santa Clarita, falling on wreckage from an earlier crash.
SANTA CLARITA, CA・14 HOURS AGO
ABC7

A Virginia deputy duct-taped a Riverside family, killed them and set their home on fire, then fled with their teen daughter before fatally shooting himself, officials said Wednesday.
RIVERSIDE, CA・2 DAYS AGO
ABC7

A Downey-based company is poised to make a big impact in the EV space early next year when they begin production of the iEV Class five, an all-electric box truck capable of carrying 8,000 pounds of cargo.
CALIFORNIA STATE・1 DAY AGO
ABC7

The Disneyland Resort has announced a special ticket offer for residents in Southern California.
1 DAY AGO
ABC7

SoCal will see light drizzle, cool temperatures throughout the weekend

The drizzly, cloudy weather is continuing in Southern California through much of the weekend.
ORANGE COUNTY, CA・12 HOURS AGO
ABC7

Lost your vaccine card and your digital record is wrong? Here's how to stay up to date

Many Californians have received three or four COVID boosters, but it can be hard to keep track - especially if you've misplaced or lost your vaccine card or your digital record is not up-to-date or difficult to retrieve.
CALIFORNIA STATE・4 DAYS AGO
ABC7

An investigation is underway after three sets of human remains were found in the Mojave Desert earlier this month.
3 DAYS AGO
ABC7

The president of the Fernandeño Tataviam Band of Mission Indians, a historic tribe of northern Los Angeles County, spoke with ABC7 on why Native sovereignty is multifaceted.
4 DAYS AGO
ABC7

An Upland man was arrested after he allegedly beat his wife to death, left her on the side of a road and then abandoned his young daughter at a gas station.
UPLAND, CA・3 DAYS AGO
ABC7

A stranded hiker managed to survive on his own for two weeks in the Southern California wilderness until he was discovered by a couple on a camping trip nearby.
ANGELUS OAKS, CA・2 DAYS AGO
ABC7

With Stafford on injured reserve, Rams to start John Wolford against Seattle Seahawks