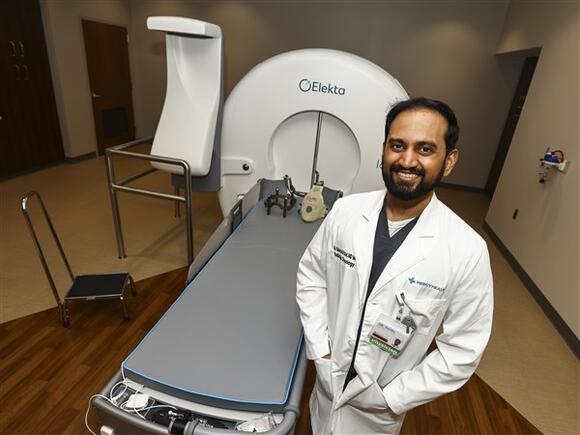 Ryan Perlaky assumed the heartburn he experienced along with other stomach issues were related to a hiatal hernia.

It was January, 2021 and the 35-year-old Northwood man decided to go to the doctor when he began throwing up. While waiting for the results of a swallow imaging test, which was administered to check his upper GI tract, Mr. Perlaky went to the emergency room because he was also having problems with his back.

“My back was hurting really bad,” he said.

Results of a CT scan rendered the devastating news that he has cancer, which doctors told him had likely originated somewhere else in his body. Further test results would reveal that Mr. Perlaky has stage four esophageal cancer that metastasized to his back, lung, liver, hips and brain. Treatment began immediately and included radiation and chemotherapy and his current treatment, a targeted therapy drug.

“About six months into my treatment I asked my doctor how close I had come to dying and he said I was lucky if I had three weeks. He said more than likely I would have fallen asleep and that was going to be it,” Mr. Perlaky said.

In March Mr. Perlaky also underwent a Gamma Knife procedure at the Mercy Health Perrysburg Cancer Center to treat eight brain tumors. The treatment took place during a single session that lasted 2½ hours. On Thursday he learned that five of the tumors have been eliminated and the other three have shrunk.

“We’re heading in the right direction,” he said of the news.

Despite the name, there is no cutting or incisions involved in the Gamma Knife method; instead, radiation and computer-guided planning are used to treat abnormalities in the brain. The procedure can treat metastatic, malign and benign tumors as well as lesions, vascular malformations, pituitary adenoma, pain syndromes such as trigeminal neuralgia, acoustic neuroma and even certain tremor and other movement disorders.

Referring to the technology as the most accurate way to treat issues in the brain, head and neck area, Dr. Suketu Patel, a radiation oncologist at the Mercy Health Perrysburg Cancer Center, performed the Gamma Knife treatment on Mr. Perlacky. The cobalt in the Gamma Knife machine emits gamma rays, or beams, from 192 sources, which can reach a 4 millimeter target precisely in order to break up the DNA in the tumor cells while saving the healthy tissue.

“In lieu of going for a surgical incision where you can slice out something, you can use radiation with a fine margin that is just as sharp as a knife and sparing healthy tissue outside of the area of concern,” Dr. Patel said. “With radiation we can treat areas from the outside without ever going in surgically to kill off tumors or lesions whether it is benign or malignant. We want to spare as much living tissue as possible.”

There is no heat, pain or after effects associated with the treatment and the most difficult aspect for the patient is lying still. Typically, patients return two to three months after treatment for a follow-up MRI, with the hope that it has either shrunk or stayed the same size, Dr. Patel said.

“No change is usually good news for us,” he said. “If it’s gone, great, and if it’s not moved or changing, that’s also good. We just don’t want it to get bigger.”

Mercy Health invested $5 million in the Gamma Knife technology, which was implemented in May, 2021. There is no general anesthesia required for patients during treatment and most return quickly to normal activities, Dr. Patel said. Those who receive treatment may be too frail for traditional surgery, or may have small tumors or tumors in hard-to-reach places. Patients may also benefit from the treatment if they have previously had conventional brain surgery to treat tumors or conventional radiation or chemotherapy.

The technology was first developed by Swedish neurosurgeons Dr. Lars Leksell and Börje Larsson in the late 1960s. According to the Leksell Gamma Knife Society, Gamma Knife radiosurgery is performed in leading hospitals around the world, with more than 70,000 patients treated every year. Mercy Health is the only medical system in the Toledo region with the Gamma Knife technology, and Mr. Perlaky is thankful for the treatment he received is so close to home.

“That’s what I like, everything is so close and I don’t have to travel a bunch of places, it’s a one stop shop, they pretty much treat everything there,” he said. “I have nothing but good things to say about the center, the staff there and everyone have been very helpful, I definitely highly recommend them.”

Since age 17, Mr. Perlaky had been taking medication to control his acid reflux, but he had never gotten an endoscopy and doctors informed him that the cancer had likely begun “a long time ago.”

“I tell everybody it’s cancer,” he said. “Now I’ve seen it take a swing at me a couple of times and I’ve seen what happens to other people, so you just have to go with the flow.”

Getting cancer at such a young age has been perplexing for the married father of two who never smoked or drank alcohol. Prior to his diagnosis he owned a landscape business but he has been unable to work and is focused now on taking care of his family and his home.

“We’ll just see how things go, that’s what we gotta do,” Mr. Perlaky said. “The doctors have told me that this is my full time job. The downside is there is no cure for what I’ve got, so you’ve just gotta make the best of it and that’s what we do.”