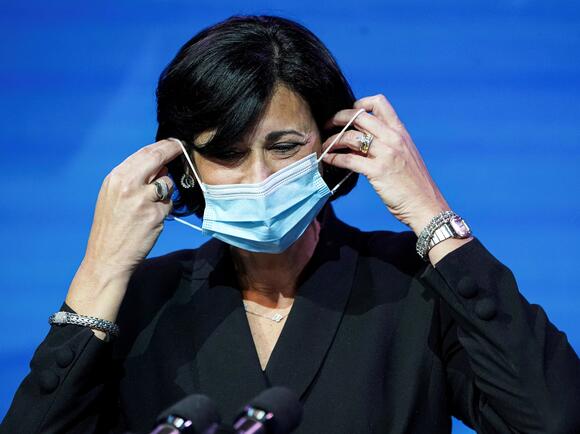 New science has again prompted the Centers for Disease Control and Prevention to update its mask guidelines. The CDC recommended on Tuesday that fully vaccinated people wear masks in public indoor settings "in areas with substantial and high transmission." That includes a large swath of the US right now , including the vast majority of counties in the South.

The CDC recommended that all teachers, staff, students, and visitors at K-12 schools mask up as well.

The goal of these new guidelines, CDC director Rochelle Walensky said, is to "help prevent the spread of the Delta variant and protect others."

"Information on the Delta variant from several states and other countries indicates that, on rare occasions, some vaccinated people infected with the Delta variant after vaccination may be contagious and spread the virus to others," Walensky said during a press call on Tuesday. "This new science is worrisome and unfortunately warrants an update to our recommendations."

The CDC estimated last week that unvaccinated people represent about 97% of hospitalized COVID-19 cases in the US. Vaccines reduce the risk of a symptomatic Delta infection sevenfold, Walensky said. And the risk of hospitalization and death from Delta drops twentyfold after someone has been vaccinated, she added.

But in areas of high transmission, Walensky said, about 1 in 20 - or even 1 in 10 - of a person's contacts could lead to a breakthrough infection (a case diagnosed after someone is fully vaccinated). That's assuming vaccines are 90% to 95% effective.

So far, vaccines appear to be slightly only less effective against Delta than against other strains. A recent study in the New England Journal of Medicine found that Pfizer's two-dose vaccine reduces the risk of a symptomatic Delta infection by 88% - compared to 95% against the original strain. But just one shot of the vaccine reduced that risk by only 36%.

Meanwhile, a Canadian study that's still awaiting peer review found that a single dose of Pfizer's shot was 56% effective at preventing symptomatic infections caused by Delta after two weeks. That rate was 72% for Moderna's shot.

Breakthrough infections could be more common with Johnson & Johnson's shot than Pfizer's or Moderna's, since the efficacy of that vaccine is lower: J&J's shot was found to cut the risk of moderate and severe COVID-19 by 66% globally in clinical trials. Yet South African researchers recently found that 94% of breakthrough infections among J&J recipients were mild, including those infections caused by Delta.

Delta is more transmissible than previous strains, though - meaning that statistically it will lead to more hospitalizations and deaths among vaccinated people, too, since it spreads so easily.

An analysis from Public Health England found that Delta was associated with a 60% increased risk of household transmission compared with the Alpha variant discovered in the UK, though more recent estimates suggest the difference is closer to 40%. The Alpha variant is already about 50% more transmissible than the original strain, according to the CDC.

Oh so now they finally come out with it , denied this all along , vaccinated carry just as much of the virus as unvaccinated , sooo vaccinated have been walking around carrying it and spreading it , although there has to be plenty of unvaccinated not wearing a mask either . So that can’t blame the rise on one group anymore .

Keep praying believers little by little all that's hidden in the darkness will be exposed by the light ,god is the truth and the light !!! God will continue to show the truth

Why isn't no one talking about Bidens rabble speech telling people if you get vaccinated then you won't get sick. If Trump had said that then it would be everywhere, front news story.

WALMART is allegedly under investigation due to recent questions about their dietary supplements. These inquiries specifically have to do with magnesium products. Attorneys for Top Class Actions believe that Walmart may be mislabeling the magnesium supplements that are under the retail chain's Equate brand, according to Best Life. Magnesium is...
2 DAYS AGO
Business Insider

The fake diplomas and transcripts would have allowed buyers to potentially skip thousands of hours of clinical training, prosecutors said.
FLORIDA STATE・1 DAY AGO
Business Insider

A 24-year-old says she 'ignored' her bloating and stomach pain until it got so bad she went to the ER. Doctors diagnosed her with ovarian cancer.