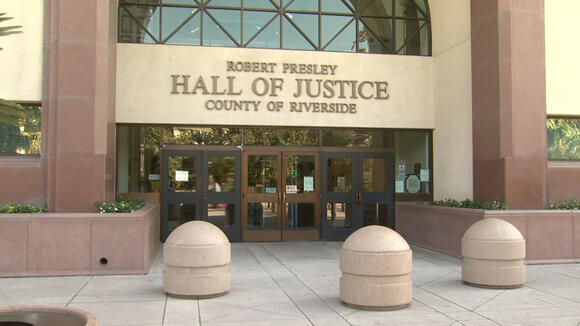 According to the DA's office, since Oct. 10, Superior Court judges have dismissed over 200 cases countywide. The dismissed cases range from misdemeanors to felonies with many types of crimes, however, officials added that most of the cases involve domestic violence charges.

"These dismissals are occurring in situations where the DA’s Office has witnesses gathered and has announced that it is ready to begin a jury trial, however, the Superior Court does not have a judge or courtroom available to hear the case. Rather than granting the prosecution a brief continuance until a trial courtroom becomes available, judges have chosen to dismiss criminal cases and release the accused perpetrators who have been charged by the DA’s Office"

“I assure you that we are doing everything in our power, advancing every legal argument, preparing every viable appeal, offering the court every possible solution, to keep our local judges from dismissing criminal cases,” Hestrin said.

The DA's office added that there is a backlog of more than 2,800 criminal cases in Riverside County as a result of the pandemic and the subsequent public health orders. The statewide pandemic orders for courtrooms ended on Oct. 7.

The Constitution and California State Law guarantee a criminal defendant with the right to a speedy trial, however, Penal Code section 1382 does not require a dismissal when good cause exists to continue a trial beyond the statutory deadlines, the DA's office added.

The California Appellate Courts have held that a backlog of trial cases caused by the pandemic is good cause to continue a trial.

Be the first to know when news breaks in Coachella Valley. Download the News Channel 3 app here.

The post RivCo DA criticizes decision to dismiss over 200 criminal cases due to lack of available courtrooms appeared first on KESQ .

What the hell is happening is our city? Letting criminals off the hook leads to other crimes. and domestic violence cases? Are the judges going to be charged as an accessory when the alleged guilty party causes serious injuries or death?

Pretty soon the USA is going to be like Mexico, a lawlessness country, where the cartels are in charge, police is corrupt, and all politicians are involved with criminals!

That progressive pukes for you. You mve got all these woke DAs and their minions entrenched in the justice system and they are pushing their agenda forward. It's utterly ridiculous that a court system is that messed up. But it's paid for by taxpayers and you don't get a say in this, only the elected dimwits get to make the call. So let me guess, they're all democrats and the vast majority of criminals being given a free pass are minorities. The court system was off for nearly two years.

The prosecution closed its case Wednesday in the Palm Springs quadruple murder retrial for Jose Larin Garcia with a focus on the victims. Larin Garcia is accused of murdering four people in Palm Springs in 2019. His first trial ended with a deadlocked jury. In her pointed closing argument, prosecutor and Deputy District Attorney Samantha The post Palm Springs quadruple murder victims in focus in prosecutor’s closing arguments appeared first on KESQ.
PALM SPRINGS, CA・1 DAY AGO
KESQ News Channel 3

The Palm Springs Police Department is putting more focus on curbing crime connected to people who are homeless. It's all the first step of the agency's plan "Operation Relentless Sun." Officers set out on their information-sharing mission Wednesday morning, going from tent-to-tent. “We’re going to start enforcing those things,” one officer said. Starting first at a homeless encampment The post Palm Springs Police launch plan to curb crime connected to homelessness appeared first on KESQ.
PALM SPRINGS, CA・6 HOURS AGO
KESQ News Channel 3

A Desert Hot Springs man who stabbed his sister in the face pleaded guilty to two felony charges today and was immediately sentenced to eight years in prison. Juan Angel Lopez, 41, pleaded guilty to one felony count each of aggravated mayhem and mayhem, according to court records.    Lopez attacked his then-35-year-old sister Jessica The post DHS man pleads guilty to stabbing sister in face, sentenced to 8 years in prison appeared first on KESQ.
DESERT HOT SPRINGS, CA・2 DAYS AGO
KESQ News Channel 3

A 45-year-old man who was among seven people from Riverside County charged in the Jan. 6, 2021, breach of the U.S. Capitol was sentenced today to 18 months in federal prison. Andrew Alan Hernandez of Jurupa Valley in September pleaded guilty to a charge of aiding and abetting in the obstruction of an official proceeding. The post RivCO man who joined Jan. 6 Capitol riot sentenced appeared first on KESQ.
RIVERSIDE COUNTY, CA・2 DAYS AGO
KESQ News Channel 3

Felon arrested, two other subjects flee, after standoff in Coachella

A convicted felon was arrested, but two other subjects managed to flee, during a standoff in a Coachella neighborhood Tuesday afternoon. According to the Riverside County Sheriff's Dept., the incident started at around 1:12 p.m. That's when deputies responded to a residence in the 50100 block of Balboa Street to assist Child Protective Services with The post Felon arrested, two other subjects flee, after standoff in Coachella appeared first on KESQ.
COACHELLA, CA・1 DAY AGO
KESQ News Channel 3

Some clinics in California that offered vaccines for mpox, formerly called monkeypox, are still waiting for state and federal reimbursement for services. This comes as the federal government ends the state of emergency for the virus. During the height of mpox, Riverside County worked with several partners to distribute thousands of vaccines for it.  The spokesperson for the county's The post Reimbursement to clinics that provided mpox vaccines appeared first on KESQ.
RIVERSIDE COUNTY, CA・6 HOURS AGO
KESQ News Channel 3

Palm View Elementary School in Coachella was placed on a brief lockdown Wednesday afternoon. According to the Riverside County Sheriff's Department, an employee saw a man jump the school's fence while holding a knife. The employee called 911 and the school was placed on lockdown at 1:34 p.m. Authorities said the man left campus and The post Palm View Elementary School in Coachella placed on brief lockdown after man with knife jumps fence appeared first on KESQ.
COACHELLA, CA・9 HOURS AGO
KESQ News Channel 3

For the past eight months, Palm Springs resident Merri Brook was a loyal customer of Stuart's Fine Jewelry, and would often have repairs made to her pieces at the business. Recently, she said there was a problem locating her jewelry when she went back to pick it up. Brook said the owner of the shop The post Residents worried about missing property following eviction of Palm Springs jewelry store; Attorney responds appeared first on KESQ.
PALM SPRINGS, CA・1 DAY AGO
KESQ News Channel 3

A 46-year-old man accused of gunning down a motel guest during an altercation in Riverside must stand trial for murder and other offenses, a judge ruled today. Robert Donald Intong of Desert Hot Springs was arrested in 2021 following a Riverside Police Department investigation into the slaying of 31-year-old Cole William Birchard. At the end The post DHS man to stand trial for allegedly gunning down Riverside motel guest appeared first on KESQ.
RIVERSIDE, CA・5 DAYS AGO
KESQ News Channel 3

There's a heavy presence of Riverside County Sheriff's deputies in a neighborhood in Coachella. Deputies are in the area of Balboa Street and Avenue 50. A spokesperson for the Riverside County Sheriff's Dept told News Channel 3 at 3:50 p.m. that they cannot confirm any specifics due to the active scene. Our crew at the The post Heavy law enforcement presence in a Coachella neighborhood appeared first on KESQ.
COACHELLA, CA・1 DAY AGO
KESQ News Channel 3

The Board of Supervisors today approved a compact with a Coachella Valley Indian tribe that will permit Riverside County authorities to initiate enforcement measures intended to prevent the repopulation of a dilapidated mobile home park rife with hazards.   "It's been a long time coming," Supervisor Manuel Perez said. "This will help us with enforcement efforts The post County, tribe reach accord on regulating dilapidated Oasis Mobile Home Park appeared first on KESQ.
RIVERSIDE COUNTY, CA・1 DAY AGO
KESQ News Channel 3

To combat the ongoing scourge of fentanyl and attempt to prevent a rising death rate connected to the synthetic drug, federal and local authorities today initiated a ``Death in Disguise'' drug awareness campaign in Riverside. @RivCoDA is Live! https://t.co/GxVaq2lFnB— Riverside County DA's Office (@RivCoDA) January 26, 2023 "It's the number one cause of death (in The post Feds join local officials to initiate ‘Death in Disguise’ anti-fentanyl campaign appeared first on KESQ.
RIVERSIDE COUNTY, CA・6 DAYS AGO
KESQ News Channel 3

Riverside County residents able to volunteer their time and resources helping save animals during wildfires, floods and other disasters are being asked to consider joining the Riverside Emergency Animal Rescue System, which starts its next academy in February.   The nonprofit REARS is operated by the county's Department of Animal Services, which will be holding a The post Volunteers sought for Riverside County Animal Rescue Service appeared first on KESQ.
RIVERSIDE COUNTY, CA・1 DAY AGO
KESQ News Channel 3

Riverside County Sheriff's deputies detained two children after reports of someone armed with a firearm inside the VIP Urgent Care building in Palm Desert. The building is located at 72630 Fred Waring Drive. Viewers called the newsroom reporting a heavy police presence in the area shortly after 5:15 p.m. A spokesperson for the Sheriff's Dept. The post Two children detained after reports of a firearm at VIP Urgent Care in Palm Desert appeared first on KESQ.
PALM DESERT, CA・5 DAYS AGO
KESQ News Channel 3

The issues along the U.S./Mexico Border have intensified, amid record encounters with migrants seeking asylum. Thursday at 6PM on New Channel 3, Peter Daut takes an in-depth look at what this means for the Coachella Valley, and what's being done in response to the migrant influx. Daut traveled to the California Border city of Calexico, The post News Channel 3 goes in-depth on migrant influx appeared first on KESQ.
CALEXICO, CA・6 DAYS AGO
KESQ News Channel 3

The search continues for a missing man last seen on January 24 in the Jurupa Valley area.  Jude Leon Abass-Busy, 22, was last seen at the Shell Gas Station on 3874 Pyrite Street in Jurupa Valley, according to his mother. His mother is a Palm Desert resident. Abass-Busby is described as 5 feet 11 inches The post Missing man with local ties last seen Jan 24 in Jurupa Valley appeared first on KESQ.
JURUPA VALLEY, CA・1 DAY AGO
KESQ News Channel 3

Local Congressman Dr. Raul Ruiz honored two Riverside County Sheriff's deputies who were killed in the line of duty just 15 days apart from each other.  "I ask everyone present on the house floor today to join me in a moment of silence for Calhoun and Cordero, for officers who have sacrificed themselves for our safety," Ruiz The post Rep. Raul Ruiz honors fallen RSO deputies on House floor appeared first on KESQ.
RIVERSIDE COUNTY, CA・7 DAYS AGO
KESQ News Channel 3

A $5.5 million project to fix and beautify the roads in front of the Riverside County Fair and National Date Festival in Indio has been completed, officials announced today. A ribbon-cutting ceremony is scheduled for Thursday at 10 a.m. at the gate one entrance, 82-503 Highway 111, to celebrate the improvements and preview the upcoming The post $5.5M project in front of County Fairgrounds complete appeared first on KESQ.
INDIO, CA・1 DAY AGO