Black MAGA Pastor Declares “War On Every Demonic, Demon-Possessed Democrat From The Gates Of Hell” 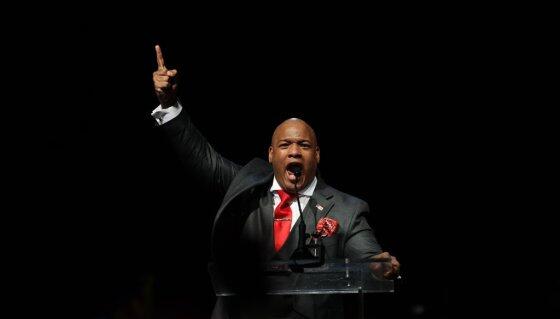 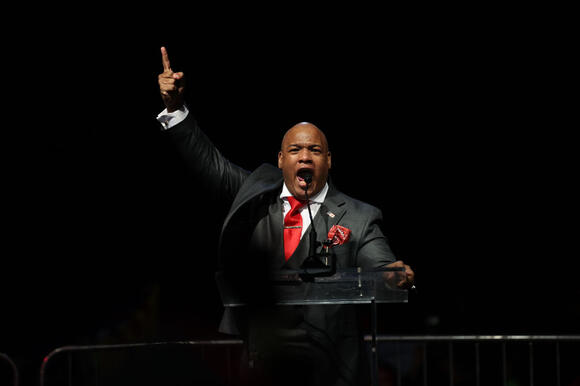 So, every once in a while the holy bowels of the sunken place spit out a Black pastor to testify before the MAGA ministry congregation full of people who likely assume Jesus didn’t season his food either. And, interestingly enough, all of these Black pastors look and sound exactly like this guy. Meet South Carolina Pastor Mark Burns, who CLTV describes as “a Trump surrogate that was caught lying about his resume by CNN .”

Pastor Mark Burns reportedly got caught lying about his academic history and military service in his bio and tried to say he was “hacked.” Dude was really out here kapping about belonging to Kappa Alpha Psi then later he explained that he only “started the process of being a part of that organization.” Like —come on, bro. (Personally, I’m just surprised he didn’t get caught lying about being the president of the Sunken Place HOA when really he’s just a nosy neighbor telling his fellow house negroes which side of the driveway the mailbox should be on.)

Burns also repeated the lies in his bio when he spoke at the Republican National Convention, which, to his credit —even Candace Owens wasn’t tap-dancy enough to shuck and jive her way into an RNC invite. But he wasn’t so successful when he tried to get down with GOP but failed to win his primary. But now he’s back and he appears to be trying to perform some kind of political exorcism in front of a white…I mean, live audience. (But they were white AF though.)

Speaking at Eric Trump and disgraced Michael Flynn’s ReAwaken America tour in Idaho last week , South Carolina Pastor Burns, a Trump surrogate that was caught lying about his resume by CNN , went on an insane rant about demons and devils from hell.

Speaking at the QAnon/Evangelical event Pastor Burns, who lost his political bid to win the Republican nomination in South Carolina earlier this year thanked Flynn for making an appearance.

In his screaming sermon (rant) Burns later made his thoughts known about the majority of this great nation. “I’m coming here to declare war on every demonic, demon-possessed Democrat that comes from the gates of Hell!” I just don’t understand why Black conservatives always have to be so extra. Somebody tell Creflo MAGA he doesn’t need to go full fire and brimstone just to keep his little white nationalist parishioners shouting a-Klan…I mean, amen. Calm down, KK-Kirk Franklin , it’s not that serious.

The post Black MAGA Pastor Declares “War On Every Demonic, Demon-Possessed Democrat From The Gates Of Hell” appeared first on The Latest Hip-Hop News, Music and Media | Hip-Hop Wired .

Not ALL Democrats are evil..how dare you pass judgment on something as idiotic as what party you are in..GOD DOES NOT CARE ABOUT POLITICS,,only your soul.

This is the guy that stormed out of an interview because he got busted telling a bunch of lies about himself on his churches home page. Another Trump connected fraud.

This dude 😎 doesn't know which way is up 🤠. They let him on the stage so they can say this fool think 😅 is one of us. Another one that drank from Trumps fountain of stupidity. He needs to do some soul searching. False prophets are everywhere good is bad, 😞 bad is good.

Vice President Kamala Harris dressed to impress at the first state dinner held by President Joe Biden and First Lady Jill Biden since his inauguration. The Vice President arrived at the White House on December 1 for the star-studded dinner wearing a one-shouldered black dress. The top portion of the gown featured sparkles that twinkled in the light.
4 DAYS AGO
HipHopWired

The moment most everyone, with common sense, feared has arrived. Billionaire troll Elon Musk said on Saturday (Nov. 19) that he would be reinstating Donald Trump to the platform. The decision is only the latest, eyebrow-raising move from Musk, who purchased Twitter in October for $44 billion after trying for months not to purchase the […] The post Phony Stark aka Elon Musk To Reinstate Donald Trump On Twitter, White Power Twitter Praises Lord Cheeto’s Return appeared first on The Latest Hip-Hop News, Music and Media | Hip-Hop Wired.
16 DAYS AGO
HipHopWired

Walker, a former NFL player, struggled in the general election compared to the other statewide GOP candidates, who all won their respective races.
GEORGIA STATE・2 DAYS AGO
Newsweek

"I don't expect Manchin or Sinema to have much influence to be quite honest," one expert told Newsweek.
ARIZONA STATE・3 DAYS AGO
Toby Hazlewood

Marjorie Taylor-GreenePhoto byGage Skidmore, United States of America, CC BY-SA 2.0 via Wikimedia Commons. On December 2, the House of Representatives passed a series of bills intended to provide help for pregnant veterans and those who have just given birth. The bill - HR 2521 - received bipartisan support in the House, and will now pass to the Senate for voting having exceeded the required two-thirds majority.
GEORGIA STATE・2 DAYS AGO
Newsweek

The Donald Trump-endorsed candidate's campaign for the Georgia Senate seat has been met with a string of controversies and scandals.
GEORGIA STATE・1 DAY AGO
Newsweek

An expert told Newsweek that Walker even being within striking distance of a Senate seat as a "scandal-plagued, rookie politician with no qualifications," is an achievement.
GEORGIA STATE・3 DAYS AGO
HipHopWired

A sergeant with the New York Police Department was docked vacation days as part of her suspension for sporting patches in support of Donald Trump at a protest last year. The punishment was revealed in a new disciplinary report. The post NYPD Officer Docked 30 Vacation Days For Pro-Trump Patches appeared first on The Latest Hip-Hop News, Music and Media | Hip-Hop Wired.
NEW YORK CITY, NY・7 DAYS AGO
AFP

Iran sentenced five people to hang for killing a paramilitary member, the judiciary said Tuesday, a ruling condemned by rights activists as a means to "spread fear" and stop protests over Mahsa Amini's death. "These people are sentenced after unfair processes and without due process," IHR director Mahmood Amiry-Moghaddam told AFP. "The aim is to spread fear and make people stop protesting."
21 MINUTES AGO