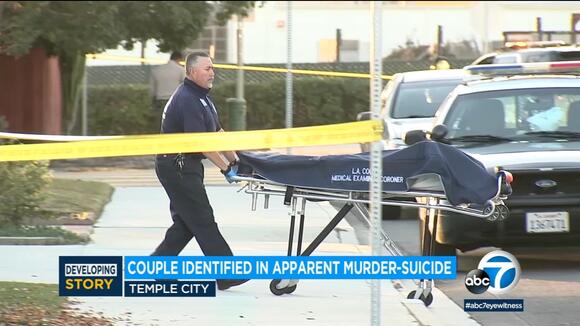 The man and woman who were found dead over the weekend after an apparent murder-suicide in Temple City have been identified. The shooting happened in the 9200 block of Pentland Street just after 7 a.m. on New Year's Day. Deputies went to the home after receiving a call about a possible domestic violence incident involving a shooting. Investigators say 28-year-old Justin Joseph shot and killed 27-year-old Jeanette Gallegos before killing himself. According to a report published by the Pasadena Star-News , Gallegos had three children between the ages of 5 and 11. They reportedly ran out of the house unharmed the moment police arrived.

A man and woman were discovered dead after an apparent murder-suicide at a home in Temple City where three children were found unharmed, authorities said.

Joseph was not the father of the children, according to reports, and was Gallegos' boyfriend. The Pasadena Star-News said one of the children made the 911 call early Saturday morning. A GoFundMe account has since been created to help the family of Gallegos' with funeral expenses. The incident remains under investigation. Anyone with information is urged to contact the Los Angeles County Sheriff's Department's Homicide Bureau at 323-890-5500. You can also submit information anonymously by calling Crime Stoppers at 800-222-TIPS (8477).

Residents in an upscale Riverside neighborhood are on alert following four home invasions that have occurred over the last month. Police still haven't linked any of them together as they continue to investigate the recent crimes.
RIVERSIDE, CA・21 HOURS AGO
ABC7

A man was found fatally injured on a sidewalk in downtown Los Angeles after a possible robbery, police said, prompting a homicide investigation.
LOS ANGELES, CA・1 DAY AGO
ABC7

At least one person was injured and a dog was killed after a car going the wrong way crashed head-on into another vehicle Tuesday night in Duarte.
DUARTE, CA・1 DAY AGO
ABC7

A 16-year-old boy was arrested Wednesday afternoon in Montclair for allegedly stabbing a 16-year-old girl several times, including in the head.
MONTCLAIR, CA・8 HOURS AGO

A homeless man in a wheelchair was shot and critically wounded outside a McDonald's in South Los Angeles, police said, and the shooter remains at large.
LOS ANGELES, CA・15 HOURS AGO
ABC7

The Las Vegas man accused in the deadly church shooting in Orange County apparently his seven-volume diary to a newspaper before the attack.
ORANGE COUNTY, CA・1 HOUR AGO
ABC7

A chaotic smash-and-grab robbery was captured on surveillance video at a jewelry store in El Monte, prompting a search for the suspects.
EL MONTE, CA・19 HOURS AGO
ABC7

Rialto teenager back home after being kidnapped by man she met online, ending up in New York

A Rialto teenager is safe and back home with her family after she was kidnapped by a man she met online.
RIALTO, CA・4 HOURS AGO

The Los Angeles County Sheriff's Department is on a mission to wipe out illegal marijuana grows and has made hundreds of arrests since the beginning of the year.
LOS ANGELES COUNTY, CA・20 HOURS AGO
ABC7

The Medal of Valor is one of the highest honors a public safety officer can receive and three California Highway Patrol officers can now say they have earned it.
RIVERSIDE, CA・1 DAY AGO
ABC7

A man remains hospitalized in critical condition after he was shot when three suspects broke into his home in Riverside, according to police.
RIVERSIDE, CA・3 DAYS AGO
ABC7

A woman was arrested after she led LAPD on a chase and then slammed into a patrol vehicle in reverse, prompting a standoff on an off-ramp of the 101 Freeway.
LOS ANGELES, CA・2 DAYS AGO

A Las Vegas man accused of killing a prominent doctor and injuring five others in a church shooting in Laguna Woods has been charged with 10 counts and could face the death penalty.
ORANGE COUNTY, CA・1 DAY AGO
ABC7

A witness is recalling the moment he rushed to help the man who was shot and killed outside Grand Central Market in downtown Los Angeles over the weekend.
LOS ANGELES, CA・2 DAYS AGO
ABC7

The U.S. government's road safety agency has dispatched a team to investigate the possibility that a Tesla involved in a Newport Beach crash that killed three people was operating on a partially automated driving system.
NEWPORT BEACH, CA・14 HOURS AGO
ABC7

Two people were killed when their vehicle crashed into the back of a semi-trailer truck on the westbound 210 Freeway in the Sunland-Tujunga area, according to authorities.
SUNLAND-TUJUNGA, CA・2 DAYS AGO
ABC7

A crisis comfort therapy dog and his handler, working with the O.C. Sheriff's Department, were called to one of the hospitals treating some of the Laguna Woods church shooting victims.
LAGUNA WOODS, CA・3 DAYS AGO
ABC7

Car explodes into fireball after street takeover in Willowbrook

A dangerous street takeover ended with a car going up in flames in South L.A. Two people were arrested, police say.
WILLOWBROOK, CA・4 DAYS AGO
ABC7

Three people were killed Sunday when their vehicle burst into flames following a collision on the 118 Freeway in Granada Hills.
SAN DIEGO, CA・4 DAYS AGO