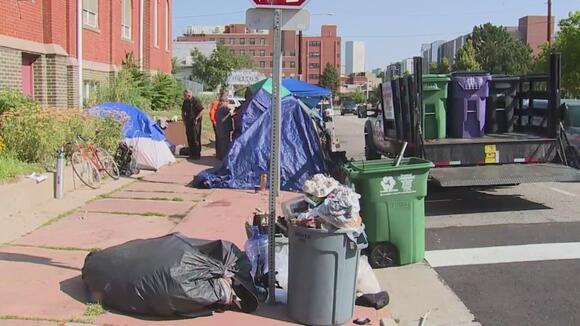 DENVER (KDVR) — The legal battle over how the City of Denver conducts clean-ups around homeless camps will eventually stop, says one attorney, when every homeless person has access to affordable housing.

“The end game of the lawsuits is for the sweeps to stop,” said Andy McNulty, a Denver civil rights attorney who has been instrumental in the legal battle over how the city clears homeless encampments from public rights of way. “The end game of this entire fight is for everyone to have a house to come home to.”

McNulty said paying contractors and city workers hundreds of thousands of dollars annually to continuously clean up these areas is a “waste of city money.”

McNulty, who is actively involved in a related lawsuit against the City of Denver, also helped argue a 2016 case in federal court in which plaintiffs alleged the city had been pushing homeless people around the city to make room for more economic development.

Seeing the problem: Homelessness in the Denver metro

The suit argued the city’s camping ban, passed in 2012, was leading to the abuse of people’s rights.

“Defendants have engaged in a systemic evisceration of thousands of displaced persons’ constitutional rights in order to clear the way for new housing and economic development in the Downtown Denver area,” the suit said. “While gentrification may have positive benefits for a few, it is not a legal basis for treating this vulnerable class as though their civil rights were nonexistent.”

In 2019, the city settled the suit, paying $30,000 to five plaintiffs and $550,000 in plaintiffs’ attorneys’ fees. The City of Denver also agreed to provide at least seven days’ notice prior to a large-scale sidewalk clean-up, and the city now provides access to storage for people who may be displaced or affected by a clean-up.

“I wouldn’t say that we’re in a better place. I would say that there are more protections for unhoused folks, so they don’t have their property taken and summarily thrown away,” said McNulty. “The city knows that someone is watching, so that’s a helpful thing.”

Denver Mayor suggests ‘counter effort’ to force city into court: ‘Who is funding these encampments?’

Mayor Michael Hancock defended the city’s clean-ups and questioned why so many people continue to camp on sidewalks when they know clean-ups are coming.

“I think we need to ask the question, ‘Who is funding these encampments?’” Hancock said.  “These are $400-$500 tents that are being used in these encampments. The City of Denver is working every day to house and connect these individuals with services, but I do believe in my heart that there is a counter effort to try and force Denver into an action that brings us into court that will outlaw anything that we do,” he said.  “I think that the media and our critics are asking the wrong question.  I think we, as a public, need to start asking, ‘Where is this coming from?’”

Hancock said the clean-ups, for which the city has spent more than $400,000 so far in 2021, are not a homeless initiative but rather a public safety and health initiative.

He said many of the people who are offered services at the encampments do not accept services or shelter when it is offered.

“If I’m homeless, and I know Denver or any municipality or government institution does not want me on its corner, I’m not going to set up and be visible on that corner,” said the Mayor. “I’m going to try to find a place to go where I can be in peace and get the rest I’m looking for or go into a shelter, but that’s not what’s happening.  You’ve got to stop and ask, you know, something else is going on here, and I don’t consider this homelessness,” Hancock said.

With contributions in reporting from Carisa Scott, Serena Ung and DJ Summers.

What? No mention of drugs or violent criminal intentions most homeless inflict on our society? We are the victims as any decent homeless person who wants help can easily find it.

clean them out. homeless people should move to SF or Seattle or All homeless belong on the beach of Venice

Several residents told the City Council Monday that they are at wit’s end with the homeless encampments that have taken over their neighborhoods.The angry neighbors railed about the rampant drug use going on in the encampments and begged the city council to do something. Resident Terry Hildebrandt of the Golden Triangle showed crisp photos of people openly using and dealing drugs outside his window. He enlarged the images to poster size for the council.He calls his neighborhood “Heroin Alley.” One image he had shown a closeup of a person shooting heroin into their toes. Another person has a needle hanging out of his arm and sores covering his back. Hildebrandt briefly broke into tears. “It’s hard to live with this every day, it gets to you. We have PTSD over this.”

Adam Meltzer's daily commute to and from work is about 4.5 miles on the Cherry Creek bike trail. But he said the graffiti on the walls, signs, murals and even rocks have started to make the path an eyesore.
DENVER, CO・22 HOURS AGO
FOX31 Denver

Denver to get rapid DNA processors to identify the dead

The shelter is reducing its adoption fee to only $5 for a limited time to help offset the issue.
DENVER, CO・8 HOURS AGO
FOX31 Denver

As a result of the increased inflow of snowmelt from Colorado's high country, officials at the Barker Reservoir expect the dam's annual spill to begin sometime next week.
BOULDER, CO・1 DAY AGO

Denver International Airport is expecting about 1.2 million passengers to travel through the airport this Memorial Day weekend. Here's what they're doing to counter the recent rise in car thefts.
DENVER, CO・1 HOUR AGO
FOX31 Denver

‘People in jail get better’: Ivy Crossing Apartments without gas for weeks

People who live in one of the buildings in the Ivy Crossings Apartment complex in east Denver have been without gas for weeks. They said they've asked Xcel and the apartment building management for help multiple times, but have yet to receive any.
DENVER, CO・1 DAY AGO
FOX31 Denver

See the 2021-2022 seasonal snowfall totals so far for the Denver area, including Boulder, Fort Collins, Greeley, and more communities.
DENVER, CO・10 HOURS AGO

Boulder kicks off summer with the annual Boulder Creek Festival

Memorial Day weekend is the unofficial kick off to summer and each year Boulder kicks off summer with its annual Boulder Creek Festival. The festival will have food trucks, performances for the whole family and live music entertainment.
BOULDER, CO・8 HOURS AGO
FOX31 Denver

During Mental Health Awareness Month, there is a bigger emphasis on what Colorado can do to improve services for students.
GOLDEN, CO・10 HOURS AGO
FOX31 Denver

Mayor Mike Coffman blasted Aurora City Council Members Juan Marcano and Crystal Murillo for taking a trip to Paris that will be paid for by the city.
AURORA, CO・1 DAY AGO
FOX31 Denver

Which school districts are seeing the worst decline in enrollment?

The pandemic intensified a trend that was already in the works for some school districts. Half a dozen Front Range districts had been shedding students for years leading up to the 2019-20 school year.
DENVER, CO・1 DAY AGO

Thanks to recent beneficial moisture, some fire restrictions have been lifted across the Front Range.
BOULDER COUNTY, CO・13 HOURS AGO
FOX31 Denver

Cleanup continues after late May snowstorm

Trees have been hit the hardest following that wet, heavy snow — so much so that some cities around the metro area are opening temporary drop-off locations where people can take some of those broken tree limbs.
LITTLETON, CO・23 HOURS AGO
FOX31 Denver

Have downed tree branches? How to get rid of them based on your city

People across the Denver metro are cleaning up downed tree branches following the latest spring storm. Different cities have slightly different rules for disposing of the debris.
DENVER, CO・2 DAYS AGO
FOX31 Denver

Jeremy Janus is a professional nature photographer from Colorado and he’s thrilled that his artwork is the newest exhibit at Denver International Airport. His new exhibit “Colorado Through the Seasons”, a 35-piece solo gallery is now up in the A concourse jsut past bridge security and it’ll be on display until the end of 2022. […]
DENVER, CO・1 DAY AGO
FOX31 Denver

How to take care of those frostbitten plants

From snow to temperatures in the seventies, this season’s weather swings may have your plants confused. Chris Miller with Davey Tree shares some tips on how to care for those frostbitten plants
DENVER, CO・1 DAY AGO