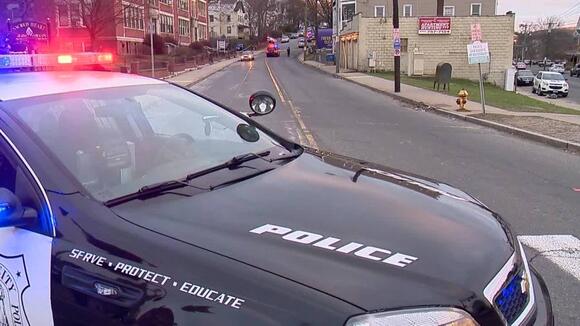 WATERBURY, Conn. (WTNH) — A Waterbury police officer’s use of force has been deemed appropriate in an incident where he accidentally shot a fellow officer last year, according to a report released Thursday by the Judicial District of Litchfield’s state’s attorney.

On Dec. 8, 2020, three Waterbury officers were involved in a stolen car investigation near Marley Place.

Police were looking for a man named Robert Harrison. At the time, Waterbury Police Chief Fernando Spagnolo said the officers recognized two SUVs, which were later identified as stolen, coming toward them quickly while they were taking Harrison into custody.

Police said the vehicles struck several police cars, injuring one officer and causing other officers on the scene to feel like they were in danger.

Police said Officer Garrett Pagel, a five-year veteran, fired his gun. One of the rounds struck fellow Officer Charles Mauriello in his chest. Mauriello was wearing a bullet-proof vest, which police said saved his life.

The report said, “Officer Pagel reasonably believed that the use of deadly force was necessary to defend himself, fellow officers and civilians in the immediate area from the imminent use of deadly physical force from the driver of the SUV.”

The Division of Criminal Justice will take no further action against Pagel.

The Naugatuck Police Department responded to a burglary in the area of Osborn Road late Friday.
NAUGATUCK, CT・9 HOURS AGO
WTNH

State Police: Cause of fire at historic New Hartford building is undetermined

Investigators say the cause of a fire that raged through a historic New Hartford building back in August will remain undetermined due to the catastrophic damage caused by the flames.
NEW HARTFORD, CT・17 HOURS AGO
WTNH

NORWALK, Conn. (WTNH) – An investigation is underway in Norwalk after a report of a threat believed to be a hoax put three schools under lockdown Friday afternoon. Around noon, Norwalk Police Department Combined Dispatch received a phone call indicating there was an alleged student at Norwalk High School in possession of a weapon. A […]
NORWALK, CT・1 DAY AGO
WTNH

One person has died following a shooting in Bridgeport Friday night.
BRIDGEPORT, CT・17 HOURS AGO

There was a big-league basketball game in the Brass City Friday night, with Waterbury Police taking on the NAACP Youth Council team. But the event was about much more than just basketball.
WATERBURY, CT・18 HOURS AGO
WTNH

Man accused of kidnapping teen in Connecticut, trying to take her to Canada

Vermont State Police are helping federal agents investigate a kidnapping that was thwarted Thursday when the suspect and victim were stopped at the Canadian border.
CONNECTICUT STATE・1 DAY AGO
WTNH

Route 17 is shut down at the intersection of Barbara Lane Friday night following a crash with reported injuries.
CONNECTICUT STATE・20 HOURS AGO
WTNH

NORTH STONINGTON, Conn. (WTNH) — A double Silver Alert has been issued in North Stonington for a pair of brothers that have been missing for over two weeks. According to state police, Shad Stewart, 13, and his brother Lance Stewart, 14, have been missing since November 17 and are believed to be in each other’s […]
NORTH STONINGTON, CT・18 HOURS AGO
WTNH

OXFORD, Conn. (WTHN) — Three suspects accused of stealing from an Oxford grocery store in November are now facing charges.  The alleged theft happened the morning of Nov. 9 at the Market 32 store on Oxford Road. According to arrest warrants, at about 6:35 a.m., four people entered the store and put multiple items in […]
CONNECTICUT STATE・2 DAYS AGO
WTNH

HARTFORD, Conn. (WTNH) — Police are investigating after a 14-year-old boy was shot in Hartford Thursday afternoon. Police responded to Russ Street for a report of shots fired. Officers found evidence of a shooting in the area of 135 Russ Street, and while on the scene, police said a 14-year-old boy arrived at a hospital […]
HARTFORD, CT・2 DAYS AGO

NEW HAVEN, Conn. (WTNH) — A vehicle involved in a crash on Interstate 91 in Meriden took down an exit sign, according to state police. Troopers responded to a two-car crash on I-91 South in Meriden at around 7:30 a.m. Thursday. One of the vehicles knocked down the Exit 18 sign and damaged the wire […]
MERIDEN, CT・1 DAY AGO
WTNH

Vigil held for Vernon student who died in I-84 crash

VERNON, Conn. (WTNH) — An 11-year-old girl died in a two-vehicle crash on Interstate 84 in Vernon Thursday night. State police and Vernon Public Schools identified the victim as Jaidyn Bolduc. Vernon Superintendent Dr. Joseph Macary issued a statement Friday morning regarding her death. It is with deep regret that I inform you that one […]
VERNON, CT・1 DAY AGO
WTNH

Westport Police caught three people suspected of shoplifting at Ulta Beauty in Westport after a crash on Interstate 95.
WESTPORT, CT・2 DAYS AGO