Do you know this woman? She’s wanted for felonious assault 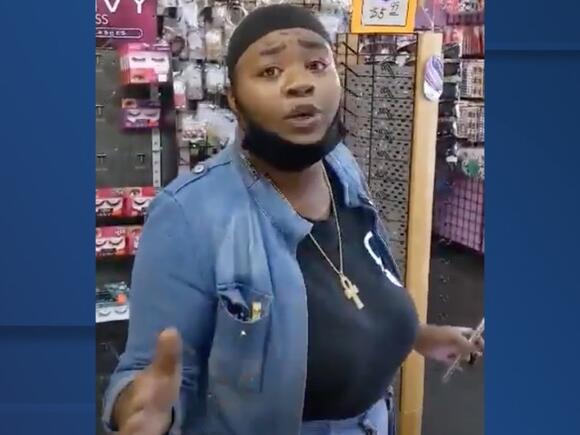 A customer attacked an elderly couple at their West Cleveland store Friday afternoon.

In cell phone video taken by the store owner, you can hear a disagreement between the couple and the woman over what is said to be an $11.85 transaction.

David Jo’s parents own Chic Beauty Supply on Lorain Road in Cleveland. He gave News 5 cell phone and surveillance video of the incident.

“All I am trying to do is get my items,” the woman said in the video to the two store owners behind the counter.

“She tried to pay for these products and the card was declined,” said Jo. “It was one of those pre-paid credit cards and she put the pin numbers in and was declined and she was not happy.”

In the video, you can hear his parents explain that she cannot leave with the items because there wasn’t money on the card.

“Watching them be so helpless and beaten like that so brutally was tough to watch,” said Jo.

The cell phone video goes black after the woman lunged at the couple, but surveillance video caught the vicious attack on camera. It shows the woman attack Jo’s father first and when his mother steps in, the woman punches and drags his mother across the store floor by her hair. Jo said the woman knocked his mother unconscious.

He said his parents are bruised and bloodied, but seem to be physically okay. He doesn’t know the woman’s intentions behind the attack but believes she knew she could overpower his elderly parents, who are in their 60s.

“Just because they’re so weak and helpless, she decided it would be okay to attack them, which is unbelievable to me, and just over an $11 purchase,” said Jo.

The attacker is now wanted by Cleveland police for felonious assault and vandalism.

Jo said his parents are proud people, and despite being scared, they returned to work Monday to clean up the store and conduct business as usual.

“All they want to do is, again, work hard and make it here as any immigrants do when they come in and try to make a better life for themselves and their children,” said Jo.

But he doesn’t feel comfortable with them going back to work until she is caught.

“I need to find this person and make sure she is held accountable for the damage she has caused,” Jo said.

If you know anything, you’re asked to call Cleveland police.

Asian couple. she will be charged with a hate crime among other charges. why can't certain people go shopping and act like humans?

I hope people flood their store with so much business they can't even handle it!!!!!!I am so sorry that animal attacked them and I hope they recover physically and mentally. I hope they get justice!!!!

Dangerously Understaffed: Cleveland finds vehicle in less than 1 in 5 hit-skips

A News 5 investigation found the Cleveland Division of Police has located the vehicle involved in fewer than one in five reported hit-skips since the pandemic started.
CLEVELAND, OH・1 DAY AGO
News 5 Cleveland WEWS

A man wanted by Akron Police was arrested on Thursday by US Marshals for allegedly fatally shooting a pregnant woman.
AKRON, OH・1 DAY AGO
News 5 Cleveland WEWS

Officers were rushing to schools across Ohio Friday when reports of shooters were called into police departments in numerous cities.
CLEVELAND, OH・19 HOURS AGO

3 people shot in Tallmadge at birthday celebration for man shot, killed in 2020

Tallmadge Police are investigating after 3 people were shot near a rental facility at a local park Wednesday as hundreds gathered at a birthday celebration for a man shot and killed 2 years ago.
TALLMADGE, OH・2 DAYS AGO
News 5 Cleveland WEWS

An Akron man was arrested early Tuesday morning after allegedly shooting the mother of his child and kidnapping his son.
AKRON, OH・4 DAYS AGO
News 5 Cleveland WEWS

Man accused of killing mother of four pleads not guilty

The man accused of brutally killing a mother of four has pleaded not guilty. Calvin Nettles appeared in court on a video screen from jail.
CLEVELAND, OH・3 DAYS AGO
News 5 Cleveland WEWS

Cleveland firefighters are looking for two people who allegedly set fire to a stolen Hyundai on Sept. 14.
CLEVELAND, OH・20 HOURS AGO

An Australian Shepherd was stolen from a backyard on Grovewood Avenue by two females on Sept. 8, according to Parma Police. They have identified both females and are working on the dog's safe return.
PARMA, OH・3 DAYS AGO
News 5 Cleveland WEWS

Lorain woman uses her own grief to give people hope

A woman in Lorain who has experienced tremendous loss is using her positive energy to help give people hope.
LORAIN, OH・1 DAY AGO
News 5 Cleveland WEWS

Cleveland Police have located a missing 16-year-old girl who they say is a habitual runaway. She was found safe Friday.
CLEVELAND, OH・1 DAY AGO

Richard Wilson of North Olmsted reports it hasn't been the best of times living with roaches at his two-bedroom unit at the Westbury Apartments for the past couple of months.
NORTH OLMSTED, OH・16 HOURS AGO
News 5 Cleveland WEWS

What are DMT labs and why are Akron police growing concerned about them?

Akron police are sending out a warning about dangerous, illegal drug labs that are starting to pop up in neighborhoods around town.
4 DAYS AGO
News 5 Cleveland WEWS

The Ohio State Highway Patrol is investigating a crash that left a 44-year-old woman dead in Wayne County.
3 DAYS AGO
News 5 Cleveland WEWS

Warrensville Heights Police have found a 16-year-old girl on Wednesday afternoon, according to Jeffrey Gates, the Director of Communications.
3 DAYS AGO
News 5 Cleveland WEWS

News 5 Investigators have been digging deep into allegations made against an estate sales business owner accused of taking money from clients.
CLEVELAND, OH・4 DAYS AGO
News 5 Cleveland WEWS

For more than 30 years, in Barberton, they have been creating beautiful mum art for their Mum Festival and this year's theme is patriotic and colorful just like, one of their volunteers.
BARBERTON, OH・21 HOURS AGO