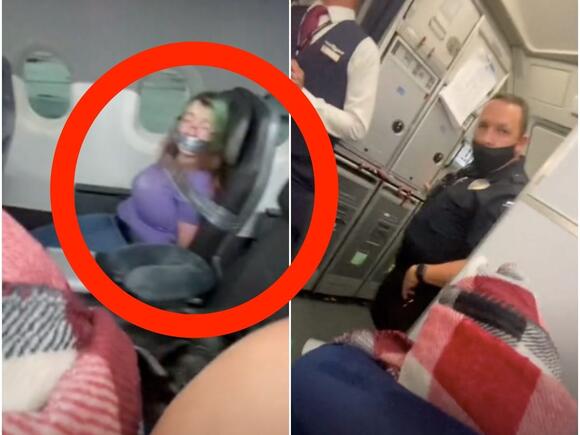 A TikTok video shows a woman duct-taped to her seat on an American Airlines flight after she reportedly attacked flight attendants and attempted to open the plane's front door.

The incident happened on American Airlines Flight 1774 that was traveling from Dallas-Fort Worth, Texas to Charlotte, North Carolina on Tuesday.

In the video, filmed by TikTok user @lol.ariee, an unidentified woman in first class can be seen with duct tape around her chest and mouth as she attempts to scream at passengers who are departing the plane after it landed.

In a follow-up video , @lol.ariee explained that the commotion started one hour into the two-hour flight when "all flight attendants were running up and down the aisles, frantically kind of like whispering to each other."

"It was just kind of like chaos and no one knows what's going on," she continued.

The pilot finally spoke over the intercom and asked people to stay in their seats because of "a bad situation in the plane," though he did not elaborate further, according to @lol.ariee.

As the plane was landing, a flight attendant who sat near the passengers explained that a woman who was going through an apparent mental breakdown "had an outburst" and attempted to get off the plane.

"She was saying, 'I need to get off this plane,' and she went up to the exits and started banging on the doors, saying, 'You need to let me off this plane!'" @lol.ariee said.

The woman reportedly started biting, spitting, and attacking flight attendants, @lol.ariee said, which is what ultimately prompted the crew to "take her down" and duct tape her mouth.

The video, which has been viewed more than 4 million times, shows a police officer and medical personnel waiting by the plane's entrance as other passengers depart the cabin upon landing.

Watch the full clip below:

An American Airlines spokesperson told Insider in an emailed statement that the woman "attempted to open the forward boarding door and physically assaulted, bit, and caused injury to a flight attendant."

"We applaud our crew for their professionalism and quick effort to protect those on board," the spokesperson added.

TikTok user @lol.ariee said in the follow-up video that she believed that "what was happening seemed like it was beyond the woman's control. She was scared."

"They should have a better way of going about it…I feel like it was handled poorly," she added.

Since January 2021, the Federal Aviation Administration has received 2,500 reports of unruly behavior by passengers , most of which involve travelers refusing to comply with the federal mask mandate.

how could it have been handled better? would you prefer her to have opened the door or assaulted a fellow passenger? gotta love these arm chair quarterbacks.

It’s just like in the movies. If some lady is trying to bring down the plane with over 100 people on it...honestly what is there to do?! Knock her out, sedate her, or tie her up. Or just let everyone possibly die.... I respect the workers actions.

If I'm on a plane at 30k feet in the air, & somebody is trying to open the door & kill us all? I would do WHATEVER it took to stop her. Restraining her or killing her, the choice is hers

I travel to 20+ countries a year sharing my firsthand knowledge of reward travel, travel credit card deals, travel tips and more. If you listen carefully to flight attendant announcements, especially on airplanes that have lie-flat seats, you will probably hear them warn passengers to hold on to their phones during takeoff and landing. It should be common sense but it’s not and the big reason they do it may surprise you. It’s not because they’re worried you’re going to lose your $1,000 device and lifeline.
LIFESTYLE・19 DAYS AGO
Best Life

Never Wear These Shoes on a Plane, Flight Attendant and Pilot Warn

Before 2001, you probably didn't think much about what footwear to fly in, as long as it was comfortable. But ever since we've had to remove our shoes to get through security, that wardrobe decision has become a lot more loaded—you need shoes that don't have complicated ties or buckles, and that are easy to slip on and off so you don't hold up the line. But according to experts, there is actually one type of shoe that some people prefer that you should never wear on a plane, as they could pose more than one major risk. Read on to find out which pair of shoes you should store in your luggage instead, according to flight attendants, pilots, and other experts in the industry.
LIFESTYLE・3 DAYS AGO
Insider

British boxer Amir Khan said he was removed from an American Airlines flight after someone said his colleague's face mask was "not high enough."
BBC・8 DAYS AGO
New York Post

This was some LAX security. A homeless man managed to breach a fence at the Los Angeles International Airport and board an American Airlines plane before a cleaning crew alerted police, according to KCAL. Matthew Maine, 31, was arrested on a trespassing charge after prying his way under the perimeter...
LIFESTYLE・27 DAYS AGO

Watch: Woman Kicked Off Spirit Airlines Flight For Smoking A Cigarette On Plane

The airline tells MarketWatch that the situation was more complicated, but face coverings were involved
AEROSPACE & DEFENSE・11 DAYS AGO
Daily Mail

A mother alleges she was kicked off an American Airlines flight because her 2-year-old son was suffering an asthma attack, and was unable to wear a mask. Amanda Pendarvis was on American Airlines Flight 1284 from Dallas Fort Worth to Colorado Springs Monday with her mother, and toddler son Waylon, when she says a flight attendant, whose name she said was Carl, told her Waylon needed to wear a mask.
AEROSPACE & DEFENSE・11 DAYS AGO
Boxing Scene

Amir Khan was removed from a flight after reportedly ignoring airline protocol. The former junior welterweight titleholder from Bolton, England was aboard an American Airlines flight from Newark, New Jersey to Colorado Springs, where is now conducting his training camp. According to the 34-year-old, he and a colleague were removed...
PUBLIC SAFETY・8 DAYS AGO

American has left countless travelers in the lurch this summer with canceled flights. I'm ensuring it doesn't happen to me again on my next flight.
LIFESTYLE・23 DAYS AGO
wmleader.com

See passengers melting down over masks get kicked off JetBlue flight

You may be losing track, but another disturbing incident involving face masks on a plane was caught on camera Wednesday evening. Route: Fort Lauderdale to San Diego. In video posted by a fellow passenger and reshared to thousands by social media influencer Fifty Shades of Whey, a maskless man is seen yelling and cursing at two male flight attendants at the front of the aircraft.
LIFESTYLE・17 DAYS AGO
flyertalk.com

Why Did American Airlines Remove a Toddler From a Flight?

Once again, conflicting stories are circulating about why a child not wearing a face covering was removed from an American Airlines flight. While the mother says the child was suffering from an asthma attack, the airline says the child was up and about prior to takeoff without showing any symptoms.
LIFESTYLE・11 DAYS AGO
WashingtonExaminer

A toddler and his family were kicked off of an American Airlines flight when the child was reportedly unable to comply with the mask requirements due to an asthma attack.
TRAVEL・11 DAYS AGO

Spirit Airlines crew were asked to change out of their uniforms for their safety to avoid angry passengers, report says

A passenger claims she was escorted off a plane for wearing a crop top in a TikTok that has gone viral.Ray Lin Howard, a rapper who goes by the stage name Fat Trophy Wife and uses the TikTok name @fattrophywife, made the accusations in a now-viral video in which she said she had been “harassed” by Alaska Airlines staff and escorted off the plane by police because of her “inappropriate” outfit.In the clip, captioned, “@alaskaair Flight attendant harassed and called the airport police on me for my inappropriate outfit”, she filmed herself walking with multiple police officers behind her.The...
BEHIND VIRAL VIDEOS・21 DAYS AGO
Amy Christie

A mother and her son were removed from an American Airlines flight because the little boy couldn’t keep his face mask on. A video of the incident shows how the toddler, who has asthma, keeps crying while his mother tries to keep his mask on.
DALLAS, TX・10 DAYS AGO
SFGate

A woman was late for her flight. So she told airline workers there was a bomb on the plane, police say.

Marina Verbitsky arrived at her terminal in Florida's Fort Lauderdale-Hollywood International Airport on Monday night with her husband and son, but they were too late: The plane was about to take off. Verbitsky told an airline employee she needed to get on the plane because her son had school, a...
PUBLIC SAFETY・18 DAYS AGO
hawaiinewsnow.com

Watch “This is Now,” live from the Hawaii News Now Digital Center, weekdays on KHNL at 12 p.m. and on all of our streaming platforms. China flies dozens of fighter jets near Taiwan. This Is Now. This is Now (Sept. 23, 2021) Updated: 4 hours ago. Watch “This is Now,”...
HAWAII STATE・4 DAYS AGO
Daily Mirror

Plane passengers were shocked after a woman sparked a cigarette as soon as the flight landed - even though smoking on planes is illegal. A TikTok video shows the woman lighting the cigarette inside the plane cabin, even though it is a public flight and smoking on board is banned.
LIFESTYLE・27 DAYS AGO
Amomama

Flight attendants faced a massive challenge as a highly aggressive pair refused to leave the plane. One of them was violently shouting in the face of a cabin worker. The anxiety of what could happen next hung uneasily in the air. A video went viral of a defiant couple getting...
PUBLIC SAFETY・11 DAYS AGO
NBC Dallas-Fort Worth

A Las Vegas man who berated a flight crew and passengers and growled like a dog on an American Airlines flight Monday from Los Angeles to Salt Lake City has been cited for public intoxication and disorderly conduct. Video shows the man standing and confronting a flight attendant at the...
LIFESTYLE・20 DAYS AGO