Posted by
Steven Bonifazi
23 days ago 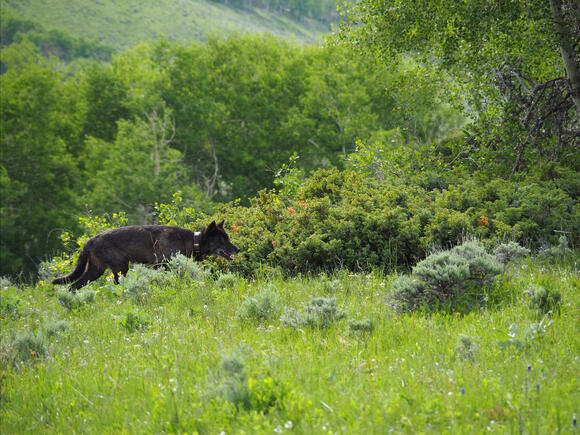 (DENVER, Colo.) Wildlife officials have discovered that a collared wolf, wolf M1084, is actually a female wolf and should now be referred to as F1084.

The determination of wolf F1084 being female came from Colorado Parks and Wildlife (CPW) working with the Wyoming Game and Fish Department (WGFD) and Grand Teton National Park (GTNP), according to a press release from CPW. The wolf was initially captured and collared in January of 2017 and later left Wyoming's Snake River pack, staying in Jackson County for the last two years.

CPW witnessed denning behavior from F1084, spotting the wolf traveling in Jackson County in February with wolf M2101, a male wolf they captured and collared. Staff from CPW fitted M2101 with a GPS collar to chart travel patterns as well as additional behaviors of the pair.

The denning behavior was discussed among CPW staff with partnering agencies who analyzed the genetic information and found that F1084 was in fact a female gray wolf and had been mislabeled.

“The news of potential denning behavior of wolves in Jackson County is a real credit to Colorado Parks and Wildlife’s on the ground scientists,” said Governor Jared Polis. “We know wolves are resilient, hardy animals and in this case two of them hundreds of miles from their home packs found each other and are now making a home in Colorado."

Killing a wolf in the Centennial State is currently a crime, as gray wolves are currently a state endangered species. Anyone who commits such a crime can be subject to jail time, fines and potentially the loss of license privileges.

Proposition 114, which was approved by Colorado voters on November 3, 2020, directs CPW to create and implement a plan that will reintroduce gray wolves into the state to ensure the survival of wolves by the end of 2023, according to The Denver Post.

It has not yet been determined whether or not reproduction has occurred between the two gray wolves. Nevertheless, staff from CPW will continue monitoring collar data, trail cameras and reports of sightings to catch any changes in behavior or denning behaviors that possibly show signs of more wolves within the area.

“Confirmation that we have a male and female pair of gray wolves and observing what may be denning behavior in the state is an interesting development as we begin our planning and implementation process for reintroducing gray wolves to the state,” said CPW Director Dan Prenzlow. “As we begin the discovery process with our Technical Working Group, we can now also observe how a naturally migrating pair is adapting here in Colorado and use that information to help inform plans moving forward.”

Colorado Parks and Wildlife chose the members for the group which will work to reintroduce wolves in the state.

The U.S. Fish and Wildlife Service may possibly relocate or euthanize a female grizzly bear and her cubs if 10-14 days of hazing does not work.

DENVER — Colorado State wildlife officials say the first gray wolf pups in 80 years have been spotted in Colorado. Gov. Jared Polis' office said in a news release Wednesday that a state biologist and district wildlife manager each spotted a litter of at least three wolf pups over the weekend with their parents, two adult gray wolves known to live in the state.

(CBS4) – A heavily debated topic in our state is now taking its own course of action. Colorado has its first wolf pups born in the wild since the 1940s. This comes ahead of the state’s re-introduction of gray wolves. The endangered gray wolf pups have been spotted in Jackson...

The state’s first wolf pups in nearly 80 years have been born in northern Colorado, Colorado Parks and Wildlife announced Wednesday. CPW said multiple pups were spotted three times between Friday and Tuesday by CPW staff. The pups were seen with a male adult wolf and female adult wolf that were identified as a breeding pair in late May.

A senior Colorado Parks and Wildlife manager has been reinstated after a 12-week investigation into a whistleblower’s allegations that he tried to sabotage the voter-directed reintroduction of wolves — using tactics that included hiring an outside group to post videos on YouTube and Facebook targeting pro-wolf state commissioners. CPW Northwest...

SPOKANE — A female wolf that had pups earlier this year was illegally killed in northeast Washington in May. Washington Department of Fish and Wildlife biologists responded to a report of a dead wolf on May 26 in the Sheep Creek area of Stevens County. The female died of a gunshot wound, according to a WDFW necropsy. The wolf is believed to be the breeding female from the Wedge Pack, according to WDFW biologists.

(Robert Theimann/Unsplash) (DENVER, Colo.) Colorado Parks and Wildlife has chosen members for the Technical Working Group and the Stakeholder Advisory Group to be advisory bodies to aid in planning the execution of Proposition 114, reintroducing gray wolves into the state.

Spotting cute pups is worth celebrating any day, but in Colorado it’s historic. For the first time since the 1940s, a litter of gray wolves has been seen in Colorado. Officials began tracking two adult wolves named “John” and “Jane” earlier this year. Fast-forward a few months, Colorado Parks and Wildlife staff saw “John” and “Jane” with three pups in Jackson County, about 150 miles northwest of Denver.

EL PASO, Texas — Texas’ El Paso Zoo recently welcomed six adorable new additions to its Mexican gray wolf pack. According to KFOX and KVIA, the pups – two females and four males – were born at the attraction in April after their parents were transferred from the Phoenix Zoo.

SPOKANE, Wash. (AP) — A female wolf that had pups earlier this year has been illegally killed in northeast Washington state. Washington Department of Fish and Wildlife biologists responded to a report of a dead wolf on May 26 in the Sheep Creek area of Stevens County. The agency says the female died of a gunshot wound.

(STEAMBOAT SPRINGS, Colo.) A man suffered serious injuries from a bear attack on Sunday at 11 p.m. near his home in Steamboat Springs. The man noticed that the door to his garage was open and went to close it when he came face to face with a sow and her two cubs. The sow attacked the man as he slowly backed away from her and the cubs, lacerating his head and legs to the point that they required surgery, according to a press release from Colorado Parks and Wildlife (CPW).

Colorado Parks and Wildlife tracked down a 'lost' black bear Sunday near Calhan following a long chase through a horse pasture. According to Colorado Parks & Wildlife (CPW), the two-to-three year-old boar was found wandering in a “terrible spot for bears” on the plains just south of Limon. You can...

That Colorado wildlife officials have sighted gray wolf pups in Colorado – the first in the state in 80 years – will not delay or slow the state’s voter-mandated reintroduction of the predators. “The ballot measure requires the establishment of a self-sustaining population, and this pack is not a population,”...

Wolf Pups Confirmed on the Ground in Colorado

Seventeen months after wildlife officials first confirmed wolves in Colorado and 10 months after a biologist reported seeing a wolf pup in the northwest part of the state, Colorado Parks and Wildlife (CPW) now confirms multiple pups are on the ground. CPW staff conducted three separate observations of the den...

A coyote walks calmly past this Down East trail camera

A coyote walks calmly past this Down East trail camera|. There are plenty of coyotes roaming the woods of Maine, but they’re often fairly elusive. People who are out and about might hear a group of coyotes howling in the evening, or might catch a passing glimpse of one running away after having been alerted to the presence of a human.

A dispute about the wolf population around Yellowstone National Park and the size of elk herds has gotten chippy, as at least one Fish Wildlife Parks Commissioner alleged intentional pain and suffering, while an outdoor group claims the commissioners who are now in the minority are using legal stall tactics to appease out-of-state environmental groups. […] The post Lawsuit challenges gray wolf harvest near Yellowstone National Park appeared first on Daily Montanan.