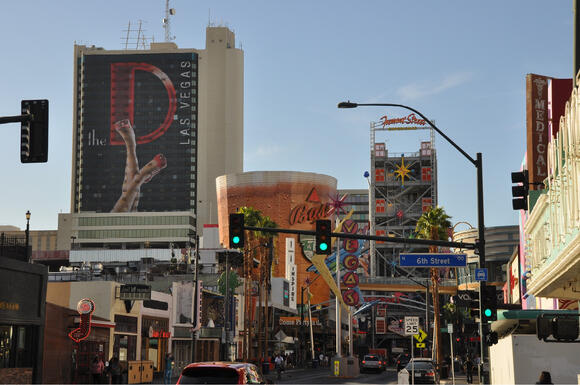 The reputation of downtown Las Vegas as being a dangerous place is very outdated. Comments my other articles on News Break highlighting different aspects of downtown are filled with mentions about drugs, guns, and the homeless population. Las Vegas is an ever-evolving city, however, and what once may have been considered a dangerous area is no more.

Are there unsafe areas in the downtown Las Vegas area? Absolutely. However, those areas aren’t filed with art, bars, and restaurants. The gentrified areas that you’ll be visiting as a tourist or a hipster local are certainly safe. Downtown is so much more than low-income housing and Fremont Street. There’s a thriving community, and it’s safe to navigate.

First, there has been a ton of development in the downtown Las Vegas area. Fremont Street is the most notable recipient of development dollars, as you’ll see the overhead canopy and laser light shows. Street vendors used to be able to pop up at will, but the city closed those stores over a decade ago and added a kiosk system. A couple years ago they went a step further and street performers required a permit. The city added circles for each street performer to stand on and spaced them evenly underneath the canopy. Beggars and performers are not allowed without paying a permit fee. and this is most certainly enforced.

Next, the big development began on Fremont Street East, just east Las Vegas Boulevard. Tony Hsieh, former owner of Zappos, created the Downtown Project, which funded people’s small business entrepreneurial dreams. He also bought several buildings on his own and restored them. Many areas were converted to trendy apartments, restaurants, and bars. This gentrified area is fairly safe all hours of the night and day.

Lastly, the Arts District emerged. This area continues the spread of trendy residences, bars, and restaurants, and it’s stripped the tourist element. More Las Vegas locals can. be found in this part of downtown, which is south of Fremont Street. It’s well within walking distance of Fremont, and if you’re looking for a more laidback vibe, it’s a great choice. You’re also unlikely to run into panhandlers in this section of the city.

Before writing downtown Las Vegas off as “unsafe,” you may wish to visit again. Vegas is always changing. New restaurants, clubs, and trends are constantly rolling in. It’s a dynamic city, and if you had a bad experience a few years ago, you may find a completely different one now.

San Fransisco is a major commercial, cultural, and financial area located in the North of California. The whole region is popularly known as the west coast. The city can trace its beginning to Spanish colonialists who established the settlement in 1776 by constructing missions and forts such as the Mission San Francisco de Asis. The independence from Spain later put the area under Mexican rule. This change led to the naming of the town as Yerba Buena. The Mexican authorities introduced policies that set to privatize land in the town. This introduction, in turn, attracted American settlers who began arriving in the area. The Mexican-American war that followed in later years led to more change when the U.S. claimed the whole area of California as part of its territory. In 1848, after the end of the war, Mexico finally ceded its control of the area, leading to the changing of its name to San Francisco. In 1849, the rush for gold in California contributed to the town's increased growth and brought along more settlers even from abroad. These developments turned the town into the largest city in the West Coast region. After that, the city has increased in size, population, and importance. Various movements, such as the Gay Rights and Peace Movements, led to the city becoming an important center for liberal activism. San Francisco hosts headquarters for major and important companies such as Twitter.

Fireworks return to the Strip for July 4, Las Vegas

Twice a year, one can expect fireworks on the Las Vegas Strip. On the fourth of July, a holiday typically known for it’s fireworks, it’s a low-key event. On New Year’s Eve, however, the fireworks are a big deal. The entire Las Vegas Strip is closed, and inaccessible to traffic. Fireworks hit the night sky to bring in the new year.

Fox 5 in Las Vegas details a program that provides on the job training for people often overlooked by employers. The original article is titled: Available for hire, adults with disabilities ready to work in Las Vegas. It can be found at this link. Please read below for the highlights.

Vegas Eater is a great resource for food and beverage options in Las Vegas, and they've recently posted an article about cannabis consumption lounges. The existance of lounges were approved by state legislature, and they're expected to arrive shortly!

Heat warnings for Las Vegas and cooling stations will open

The Associated Press released a statement about the upcoming heat wave in the Las Vegas area. While this may be no surprise to most -- as it is June and it is the middle of the desert -- what is a surprise is the opening of cooling stations.

Live entertainment on Fremont Street Experience is back

An $8,000 daytime bar tab has the internet buzzing

What's the most you've ever spent on a bar tab? Can you beat $8,000? The Big Lead has an interesting article sharing someone's receipt and the reactions from the public at large. The orginal article has more context, but here's the gist of it...

The Bellagio Conservatory has debuted its summer display

Bellagio conservatoryImage by Michelle Raponi from Pixabay. As originally reported by Fox 5, the Bellagio Conservatory on the Las Vegas Strip has debuted its new summer display. Always an amazing sight to behold, this summer's display is no different.

As the United States economy starts reopening its doors, Las Vegs is coming back to life. As Vegas Eater reports, the famous beer garden is reopening its large doors. After 440 days of closure due to the global pandemic, the big beers and wooden paddle spankings from servers are back!

Resorts World is closing in Malaysia, opening in Nevada

slot machine bankImage by Bruno /Germany from Pixabay. Genting's Resorts World is set to open in Las Vegas, just as their major resort in Malaysia has had to close, due to the global pandemic.

Possible solution for Nevada renters who are facing eviction

As reported by Fox 5, Nevada renters who would be facing eviction may have another solotion. The clock is ticking until the end of Nevada's legislative session, and the rush is on to get bills signed into law.One bill heading to Nevada Gov. Steve Sisolak's desk is a tenant protection bill, and it aims to prevent a widespread eviction crisis. The bill is expected by many to be signed into law.

avocado saladImage by Steve Buissinne from Pixabay. Krista Diamond from Vegas Eater knows her vegan and vegetarian food. She's got a great list of her top 20 off-strip restaurants, complete with mouthwatering photographs here. I've combed through her list and have tasted every restaurtant one-by-one. I can condense her picks to a top seven list.

“Absinthe” at Caesar’s Palace to host 16 shows per week

Caesar’s PalaceImage by Michelle Raponi from Pixabay. “Absinthe” is a show at Caesar's Palace that showcases feats of acrobatic artistry, comedy, and high value entertainment. It's also one of the first shows coming back to the Las Vegas Strip, now boosting its calendar to host 16 shows every week.

The only independent movie theater in Las Vegas is now open

The luxury Eclipse Theaters in downtown Las Vegas was supposed to be the next big thing for movie lovers. However, the high-priced movie tickets never gained traction. After 2020 delivered it’s final blow, the theater closed permanently.

coffeeImage by S. Hermann & F. Richter from Pixabay. If you find yourself in Los Angeles looking for a great cup of coffee and an amazing cafe experience, you are in luck. There are several neighborhoods in the LA area and so many of them have delicious coffee. You have a ton to choose from. Here is a list of a few of the best.