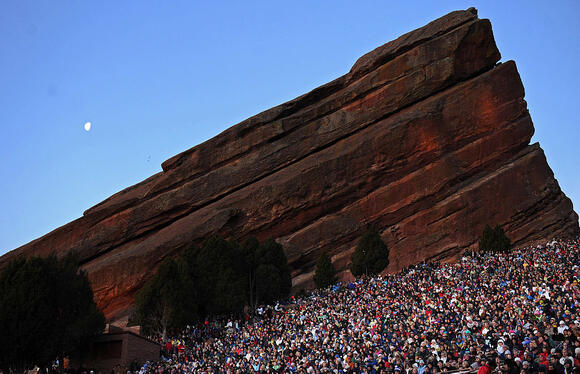 (MORRISON, Colo.) Iconic hip-hop group, Wu-Tang Clan, and prominent state orchestra, the Colorado Symphony, will perform live side by side at the historic Red Rocks Amphitheatre on Friday, Aug. 13.

Hip-hop star Big Boi, most known for being a member of the legendary hip-hop duo OutKast, will also be performing at the show along with Denver-based DJ Chris Karns.

The group went on to become one of the nation's most prolific and influential rap groups ever, among the likes of Run DMC and NWA. On Sept. 4, 2019, on-demand video subscription service, Hulu, released a series with the group titled Wu-Tang: An American Saga showcasing the formation of the group and the trials and tribulations they experienced.

The show is expected to release a second season some time this year.

One of Colorado's only full-time professional orchestras, the Colorado Symphony, was founded in 1989 as the heir to the Denver Symphony Orchestra. Each year, the symphony holds performances nearly each and every weekend from September through May, offering a multitude of world-class creativity.

They perform concerts that feature categories including classics, symphony pops, holiday, alternative and summer performances that take place at Red Rocks, such as this one with Wu-Tang.

The monumental show will take place nearly four months after Red Rocks reopened its doors to concert and event-goers, reducing its 9,525 seating capacity to 2,500 due to the COVID-19 pandemic. According to CBS Denver, the amphitheater is expecting to increase its capacity by more than double what it currently is sometime this week, potentially allowing roughly 6,300 people to attend concerts.

Nevertheless, Red Rocks have partnered with the Denver Department of Public Health and Environment and supermarket Safeway to provide single-shot vaccines of the Johnson and Johnson vaccine to whoever would like one through their "a shot, a pop, a shirt, and a show" program. The goal of the program is to distribute a total of 100 vaccine shots per show.

World-renown DJ, Diplo, took to Twitter a day before performing at the amphitheater to promote the vaccine shots they are offering.

For more information regarding the show, including where to purchase tickets, visit here.

WASHINGTON, June 23 (Reuters) - President Joe Biden plans to unveil new steps to curtail U.S. gun violence on Wednesday, including measures aimed at stemming the flow of firearms used in crimes, after pledging to push for sweeping changes to firearms laws. The actions will build on executive orders signed...

Former police captain Eric Adams has a sizable lead in New York City’s Democratic mayoral primary after voters in the nation’s biggest city went to the polls Tuesday. As of noon Wednesday, Adams had roughly 32 percent of the vote in the multi-candidate field, with civil rights lawyer Maya Wiley almost 10 percentage points behind him and former sanitation commissioner Kathryn Garcia a close third.

Washington — Senate Republicans blocked a sweeping elections and ethics reform bill on Tuesday, dealing a significant blow to Democratic efforts to secure voting rights protections on the federal level. But the White House and Democratic leaders in Congress insist that the fight to pass voting rights legislation is not over.

Warren Buffett announced that he is donating another $4.1 billion to philanthropy, and is stepping down from role as trustee at the Bill and Melinda Gates Foundation.

MOSCOW, June 23 (Reuters) - Russia said on Wednesday it had fired warning shots and dropped bombs in the path of a British warship to chase it out of waters Moscow claims in the Black Sea off the coast of the Crimea peninsula. Britain rejected Russia's account of the incident,...

House Speaker Nancy Pelosi plans to announce this week whether she will create a select committee to investigate the January 6 attack on the U.S. Capitol, her spokesperson tweeted. Several news outlets, including CBS News, initially reported that Pelosi had told some House Democrats that she would create a committee to investigate the attack, citing a source familiar with her comments.

The Union of European Football Associations (UEFA) defended its decision to deny the request for a rainbow lights display at a German soccer stadium to celebrate Pride Month. In a statement, UEFA said they fully support the wearing of LGBT rainbow colors, adding that their decision to deny the Munich council's request wasn’t “political”.

WASHINGTON — The Biden administration planned to concede Tuesday that it will likely fall short of President Joe Biden’s goal of partially vaccinating 70 percent of American adults by Independence Day, but insist it has “succeeded beyond our highest expectations” in returning the nation to a pre-pandemic normal. Jeffrey Zients,...

Defense Secretary Lloyd Austin said for the first time he is supporting changes to the military justice system that would move prosecuting sexual assault cases out of the military chain of command to independent military lawyers. Norah O’Donnell joins “CBS This Morning” to discuss.