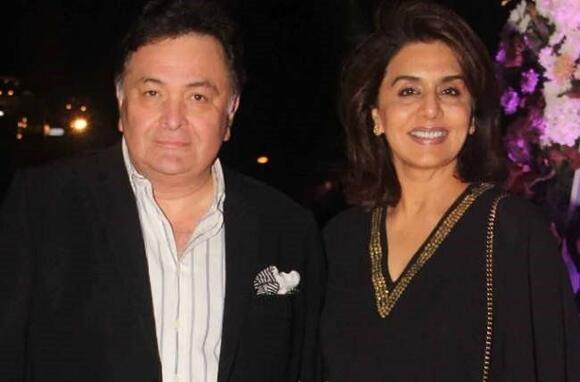 Veteran actress Neetu Kapoor shared a social media post in the memory of her late husband Rishi Kapoor on their 41st wedding anniversary on Friday.

Neetu shared a one and a half minute video on Instagram which comprises a collage of scenes from different films featuring the two of them in their younger days as well as recent years.

Captioning the video, Neetu wrote: "Justtt" along with a heartbroken emoji. "Would have been our 41 years today," she added.

A tribute fit for a royal! Princess Beatrice and Edoardo Mapelli Mozzi have just reached a major milestone in their marriage. On Saturday, July 17, the couple celebrated their first wedding anniversary after exchanging vows with their loved ones by their side last year at The Royal Chapel of All Saints at Royal Lodge, Windsor. Taking to Instagram to mark the special occasion, Edoardo shared a romantic tribute to his wife, writing, "I can't believe it has been 1 year." "Every second of every day since has been so full of joy, happiness, laughter and love," the English property developer continued. "You are the kindest, loveliest and most beautiful person in...

Julia Roberts and Danny Moder were spotted walking their dog on an evening walk in a rare set of photos. The couple looked so in love as they held hands!. Julia Roberts, 53, and her husband Daniel Moder, 52, looked so cute while walking their sweet dog in Los Angeles! The couple held hands as they strolled alongside their gray colored dog on Tuesday, July 27. Julia and Danny, who works as cinematographer, twinned in jeans and face masks as on the casual outing — see the photos here.

‘NCIS: Hawai’i’ Star Vanessa Lachey Drops ‘Out of This World’ Wedding Anniversary Post With Husband Nick, Sir Richard Branson By Her Side

“NCIS: Hawai’i” star Vanessa Lachey and television personality Nick Lachey have been happily married for 10 years today. Vanessa and Nick dated for five years before tying the knot on July 15, 2011. Before that, Nick was married to Jessica Simpson, who divorced him in 2006. The “NCIS” star took...

Jamie Lee Curtis reveals her 25-year-old daughter is transgender: ‘We have watched in wonder and pride’

Jamie Lee Curtis has shared for the first time that her 25-year-old daughter Ruby is transgender. Curtis made the announcement with her daughter’s permission in a new cover interview with AARP The Magazine. She said she and her husband Christopher Guest “have watched in wonder and pride as our son...

TEEN Mom star Catelynn Baltierra is pregnant with TWINS. She shared the news one year after she suffered a miscarriage with husband Tyler. The 29-year-old took to Twitter on Wednesday to share the exciting news. Alongside a photo of the sonogram, Catelynn wrote: “Our secret is finally out- it’s TWINS!”

What a love story for Aaron and Rachel. The two met as missionaries, fell in love and then married. Aaron then discovered Rachel was pregnant with twins. So what was the issue?. Travel On TV reported on the unusual circumstances surrounding the birth of Aaron and Rachel Halbert’s babies. “During...

A 29-year-old mother thought a cruel prank was being pulled on her when she discovered that her sister was using the same baby name she had picked for her child who tragically passed away. The mum explained that she became pregnant with twins a few years ago, a boy they...

Who is holding Mariah on The Young and the Restless? Kidnapping plot explored

Who is holding Mariah on The Young and the Restless? Mariah has been missing for over a week – at least in soap opera time – and fans want her back. On Y&R spoilers, fans’ predictions were finally confirmed, as it was revealed that Mariah has been kidnapped. But who is her captor?

Mum, 28, dies days after meeting her 11-year-old son for first time in decade

A woman who hadn't seen her son since he was a baby was finally reunited on a video-call with him but tragically died just a few days later. Laura Andreoiu's 11-year-old son had been leaving with relatives in Spain for more than a decade and had not met his mum during that time.

Once again, Kim Kardashian has rolled through law books and studied paragraphs for free: The reality TV star falls through the law exam – and for the second time. In the grand finale of “Keeping Up With The Kardashians” (seasons 9 to 16 stream here on TVNOW), the 40-year-old learns that it didn’t work out again.

90 Day Fiance fans and viewers have had enough of Angela Deem's bad behavior, both on and off screen. The fan petitions to have her fired from the show have been enough to make Angela melt down with fury. Now, it appears that Angela is trying a new approach to...

Remember Jesse Hubbard from 'All My Children'? Darnell Williams Is 66 & His Looks Have Gotten Better with Time

Actor Darnell Williams, better known for his role as Jesse Hubbard in the series "All My Children," has aged well and now looks more charming than ever. Of the over 40 years of the series, Williams was part of the cast for 10. Darnell Williams is a 66-year-old British-born actor...

Little People, Big World fans may know that Tori and Zach Roloff are going through a difficult time right now. As Tori works through the heartbreak, she’s still sharing “touching” messages with her fans on social media. As we reported, Tori recently had a miscarriage. Instead of announcing that she...

Justin and Hailey Bieber dressed up more last night for Justin's art gallery auction than they did when they met the French president. The Biebers were photographed wearing matching black evening ensembles. Justin wore a black-tie suit while Hailey complemented him in a black velvet Alessandra Rich gown with two thigh-high leg slits adorned in sheer lace. Justin was all over Hailey as they left the venue: