Get the latest breaking news, sports, entertainment and obituaries in Taunton, MA from Taunton Daily Gazette.

Sibling act: Charlie and Ella Rosa have made their impact on Dighton-Rehoboth golf 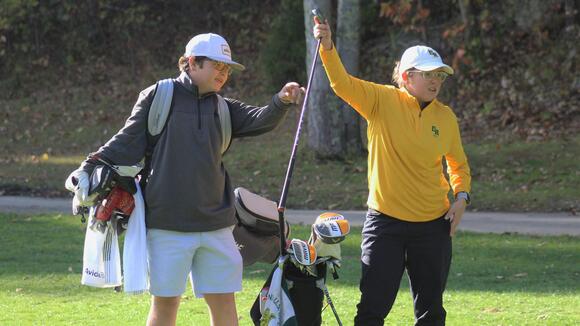 REHOBOTH — This past summer, Dighton-Rehoboth golf was facing a bit of a dilemma.

Their numbers were down drastically from past years, with just 13 golfers instead of the usual 16 to 20, leading coach Bill Cute to turn to the district's middle schools for potential recruits. He was able to find one in Beckwith Middle School eighth-grader Charlie Rosa, having athletic director Doug Kelley file for and receive a waiver from the state to bring him on board.

Little did he know the 13-year-old would quickly develop into the team's top golfer.

"He’s been a tremendous acquisition," Cute said. "He’s got the lowest-scoring average on the team this year as an eighth-grader, which I think is very significant, so he’s fit in beautifully to high school golf. It’s a two-way street. He fit in beautifully, his teammates have accepted him, but he’s worked very hard to be a good teammate, too."

Despite being the youngest player to ever compete on the team, Rosa said he felt nothing but welcomed by his teammates.

"Being the first eighth-grader to be on this team, all of the upperclassmen were very supportive of me joining this team and I love them," Rosa said.

Aces on the links:These 10 golfers are your 2021 Taunton Daily Gazette All-Scholastics

Helping that matter is that one of the players in particular was very familiar: his older sister, sophomore Ella Rosa.

"I love having Ella on the team," Charlie Rosa said. "She always has a smile on her face even after a bad round, and she’s always there to pick me up if I’ve had a bad round."

She also knows what it's like to be a bit of an outsider coming into the team. While she wasn't the first girl ever to hit the links for the Falcons, she was the only girl when she joined the team last year as a freshman.

"Last year coming in as a freshman and being the only girl on the team, it was a big change," Ella Rosa said. "You’re coming into high school but you’re also on a big high school team. I found the upperclassmen were very supportive and brought me under their wing as I came into the season last year. And with Charlie coming in too, it’s like I get to do the same for him too, bringing him under my wing as I’ve played for this program before."

In particular, the Class of 2022 really helped her adjust to high school golf.

“All the seniors like Peter Torres and Andrew Machado really took me under their wing,” Ella Rosa said.

Luckily for Charlie Rosa, he was familiar with a few of those former players as well, who were able to give him some pointers.

Being the first eighth-grader and one of the few girls in the program’s history is something both Rosas appreciate.

“I feel like it’s almost an achievement — D-R history, as we like to call it,” Ella Rosa said.

She’s no longer the only girl on the team as freshman Laura Cruz joined the program.

“It’s been nice to get to take her under my wing too,” Ella Rosa said.

Both Rosas took an interest in golf from a young age, participating in U.S. Kids Golf tournaments where Ella Rosa said she met many fellow young girls who shared her love of the game.

“You go out with girls in your age division. My dad was my caddy, which was awesome, so he was right there. And then I started to play in more of the independent ones, where I was out there by myself, and I played 18 holes with girls I met. Some of those girls that I played with, I still talk to today,” Ella Rosa said.

Among those girls is Bishop Feehan senior Nora Charnley, who Rosa had the chance to face this fall.

“When we played against her, we were always friendly with each other, and it wasn’t like a rivalry, because we’re friends,” Ella Rosa said.

As for Charlie Rosa, as well as U.S. Kids Golf, he’s also competed in a variety of tournaments including Rhode Island stroke play, where he’s played with and learned some of the Ocean State’s top golfers including Michael Hamilton and Brad Valois, and made it far in the Rhode Island Junior Amateur Championship in August.

“Playing in the Rhode Island Junior Am this year was amazing,” Charlie Rosa said. “I made the semifinals, and it was just a great tournament.”

He also won the Division I (ages 11-13) bracket at the Taunton Junior City Open in August, while Ella Rosa finished fourth in Division II (ages 14-15).

That experience is something which Cute believes allowed both Rosas to establish themselves in the team so quickly.

Charlie Rosa competed for the Falcons, while Ella Rosa was out sick, at the Division II Golf South Sectionals at Easton Country Club on Oct. 18, where the team finished ninth overall with a combined score of 357 where he had the team’s joint second-best result of 88 (+17), though it fell short of where he wanted to be.

“A lot of hard work went down the drain because I worked so hard and I just did not put it all in,” Charlie Rosa said. “It kind of just went downhill after the third hole.”

“I might add — and this is not an excuse — but I might add that it was a difficult day to play,” Cute said. “It was very windy and there was at least a two-club wind blowing most of the day, and Charlie and I both know that he could’ve played better. But I think that an experience like that when you’re playing an 18-hole stroke play, it’s just another chapter in his tournament record. He’s disappointed, but there’ll be another day.”

Both Rosas competed at the South Coast Championship at Allendale Country Club in Dartmouth on Thursday, where the Falcons closed out their 2022 season with a fourth place finish and a combined score of 351, with Charlie Rosa leading the way as he shot a 79 (+7).

Growing stronger on the course

With their season, in which D-R finished with a match record of 11-6, now behind them, both Rosas commented on much they and their teammates have grown as golfers over the past two months.

“I think this season we’ve definitely seen a lot of growth for us individually and also as a team,” Ella Rosa said. “Some of the kids on our practice squad have really risen up and have become awesome golfers and even Charlie his scoring average has gone down and mine has too and a lot of kids on the team have as well. I feel like it all wouldn’t be put together without the help of [Cute].”

“Like Ella said, everyone has grown,” Charlie Rosa said.

For Cute, the growth was very noticeable and impressive, noting that during their first scrimmage against Taunton on Sept. 6, five of the eight Falcon golfers in play that afternoon had never played a high school golf match before.

“I’m grateful because the kids totally bought into my system and we just saw the improvement grow and grow over the past few weeks,” Cute said. “We’re still short in the experience department, but as Ella said, the kids have grown leaps and bounds. We’ve just gotten better over the course of the season, so to finish 11-6 with what we started off with at the beginning of this season, I think is a tremendous achievement.”

Additionally, D-R was able to qualify for the postseason for the 30th straight season, a factor which Cute, who has led the Falcons for the past 46 years, takes great pride in.

“To have 30 consecutive winning seasons says a lot about the quality of kid and the quality of golfer that we have here at Dighton-Rehoboth,” Cute said. “At our team meeting back in August, when I took a look at what we had and I took a look at our schedule, I had some serious doubts. I had no idea how this was all going to turn out. But to finish 11-6, these kids certainly have done their part to be part of the winning tradition at D-R and I’m very proud of this team.”

Now with the season finished, the Rosas will look forward to spring and summer tournaments before coming back to Hillside Country Club next fall as they look to help extend that streak to 31 and capture the SCC title.

Get the latest breaking news, sports, entertainment and obituaries in Taunton, MA from Taunton Daily Gazette.