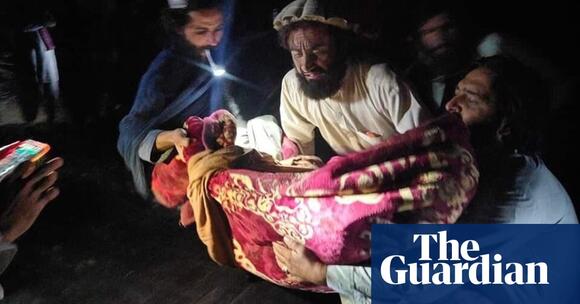 A powerful earthquake in a remote area of Afghanistan’s Paktika province has killed at least 920 people with the death toll expected rise in the impoverished country.

According to Taliban officials, hundreds more were injured in what appears to be the deadliest quake in two decades which struck during the night.

Footage from Paktika showed people being carried into helicopters to be airlifted from the area. Others were treated on the ground. One resident could be seen receiving IV fluids while sitting in a plastic chair outside the rubble of his home and still more were sprawled on stretchers.

In the immediate aftermath of the disaster, Bilal Karimi, a deputy spokesperson for the Taliban government called for aid agencies to assist with the emergency efforts. “We urge all aid agencies to send teams to the area immediately to prevent further catastrophe,” he said.

In response, the UN and EU were quick to offer help.

“Inter-agency assessment teams have already been deployed to a number of affected areas,” tweeted the UN office for humanitarian affairs in Afghanistan.

Tomas Niklasson, the EU special envoy for Afghanistan, tweeted: “The EU is monitoring the situation and stands ready to coordinate and provide EU emergency assistance to people and communities affected.”

With photographs from the area showing collapsed houses and bodies being dug out of the rubble, a tribal leader from Paktika province, Yaqub Manzor, said survivors and rescuers were scrambling to help those affected.

The local markets are closed and all the people have rushed to the affected areas,” Manzor told the AFP news agency by telephone.

The Afghan prime minister, Mohammad Hassan Akhund, convened an emergency meeting at the presidential palace to coordinate the relief effort for victims in Paktika and Khost, a neighbouring province.

But he added: “Afghanistan has a shortage of helicopters and these areas being hard to access is making relief work difficult.”

Rayan said 90 houses had been destroyed in Gayan, a district in the north of Paktika.

The centre of the earthquake – estimated to have had a magnitude of 6.1 by Pakistan and 5.9 by the US Geological Survey – occurred 30 miles south-west of the city of Khost. It occurred at the relatively shallow depth of six miles, worsening its impact.

Tremors were noticed in neighbouring countries, with “strong and long jolts” felt in the Afghan capital, Kabul, according to a resident who posted on the website of the European-Mediterranean Seismological Centre.

Deaths were also reported in the eastern provinces of Khost and Nangarhar, said Mohammad Nassim Haqqani, the head of the Afghan disaster-response authority.

Rescue efforts are likely to be complicated since many international aid agencies left Afghanistan after the Taliban took control last year and the chaotic withdrawal of the US military from the longest war in its history. Rescuers rushed to the area by helicopter.

The death toll, given by Afghan emergency official Mawlawi Sharafuddin Muslim, made it the deadliest quake since 2002, when a 6.1-magnitude tremor killed about 1,000 people in northern Afghanistan, immediately after the US-led invasion overthrew the Taliban government after the 9/11 attacks.

Pakistan’s prime minister, Shehbaz Sharif, offered his condolences over the earthquake in a statement, saying his nation would provide help to the Afghan people. At the Vatican, Pope Francis offered prayers for all those killed and injured and for the “suffering of the dear Afghan population”.

Afghanistan and the larger region of south Asia along the Hindu Kush mountains has long been vulnerable to devastating earthquakes.

The disaster comes as Afghanistan grapples with a severe economic crisis that has gripped it since the Taliban takeover.

In response to the new regime, many nations imposed sanctions on Afghanistan’s banking sector and cut billions of dollars worth of development aid. Humanitarian aid has continued, however, with international agencies, such as the UN, still operating.

I guess Biden will now be sending the Taliban billions in aid.

Swedish seismologists says blasts detected near gas pipelines, which are leaking into Baltic sea
POLITICS・5 HOURS AGO
The Guardian

A man has faced court over the death of the former surfing champion Chris Davidson who died after being punched outside a pub on the New South Wales mid-north coast. Police said they were called to Sportsmans Way at South West Rocks just after 11pm on Saturday following reports a man had been punched in the face, fallen and hit his head on the pavement.
SPORTS・1 DAY AGO
The Guardian

Basketball’s world governing body has opened an investigation after players on the Mali women’s team were filmed physically fighting one another following their World Cup loss to Serbia in Sydney. The scuffle between Salimatou Kourouma and Kamite Elisabeth Dabou broke out during a post-match interview with Serbia’s Sasa...
WORLD・18 HOURS AGO
The Hill

Former President Trump responded Wednesday to Russian President Vladimir Putin’s hinting at being willing to use nuclear weapons in Ukraine, saying that the conflict should never have happened and that it could lead to a world war. Trump said on his social media platform Truth Social that the conflict...
POTUS・6 DAYS AGO

A Russian propagandist has claimed Vladimir Putin should have nuked Queen Elizabeth II’s funeral, while all the “best people” were gathered in London. Olga Skabeyeva, dubbed the Kremlin’s “Iron Doll”, made the claims on Monday during a discussion with Andrey Gurulev, a military commander and Member of the State Duma.
EUROPE・6 DAYS AGO
Newsweek

The Russian state TV host agreed with Vladimir Putin that Russia would be prepared to use nuclear weapons if they felt it was necessary to defend their country.
MILITARY・4 DAYS AGO
Business Insider

Patriarch Kirill I said Russian soldiers who die in the war will be absolved of "sins." The Sunday sermin came days after Russia announced the mobilization of 300,000 troops. Kirill is known to support Russian President Vladimir Putin and the invasion of Ukraine. The leader of the Russian Orthodox Church...
RELIGION・21 HOURS AGO
The Guardian

The renowned US big-mountain skier Hilaree Nelson has gone missing on a trek in the Himalayas after apparently falling into a 2,000ft crevasse. Nelson and her partner, Jim Morrison, had scaled the 26,781ft peak of Manaslu mountain on Monday morning. Jiban Ghimire of Shangri-La Nepal Treks, which organised the expedition, told Outside Magazine that the pair reached the summit at 11:30am local time.
PUBLIC SAFETY・4 HOURS AGO

A Russian draft officer has been shot by a man angry at his friend’s conscription and another man has set himself on fire in a protest as opposition to Vladimir Putin’s announcement of a mobilisation for the war in Ukraine grows. Protests also continued for a third day...
PUBLIC SAFETY・1 DAY AGO
The Guardian

Denver Riggleman tells 60 Minutes that texts from Mark Meadows amounted to a ‘roadmap to an attempted coup’
U.S. POLITICS・1 DAY AGO
The Guardian

Authorities in Germany are trying to establish what caused a sudden drop in pressure in the defunct Nord Stream 2 gas pipeline, with a spokesperson for its operator saying it could have been a leak. The pipeline has been one of the flashpoints in an escalating energy war between Europe...
ENERGY INDUSTRY・1 DAY AGO
The Guardian

The actor Louise Fletcher, who has died aged 88, won the best actress Oscar in 1976 for her chilling and controlled performance in the film version of Ken Kesey’s countercultural novel One Flew Over the Cuckoo’s Nest. As Nurse Ratched, who instils fear into the patients in a...
CELEBRITIES・2 DAYS AGO
The Guardian

Russia-Ukraine war latest: what we know on day 214 of the invasion

More than 730 people were detained across Russia at the latest protests against the country’s mobilisation decree, a rights group said, three days after president Vladimir Putin ordered the country’s first military draft since the second world war. The independent OVD-Info protest monitoring group said it was aware of detentions in 32 cities, from St Petersburg to Siberia. Unsanctioned rallies are illegal under Russian law, which also forbids any activity considered to defame the armed forces.
POLITICS・2 DAYS AGO
The Guardian

Host speaks at funeral of Ralph ‘Sonny’ Barger, leader of the group considered by the DoJ to be linked to organised crime
POLITICS・1 DAY AGO