A Black Man Once Walked 2,000 Miles To Start A Town In New Mexico Called ‘Blackdom’ 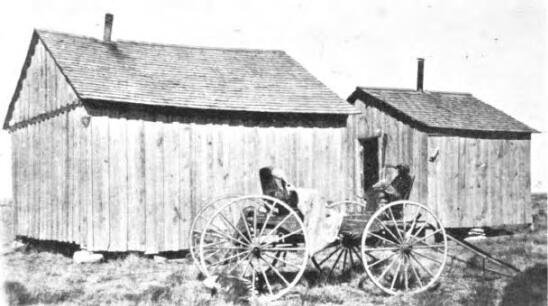 T here are so many lost black stories hidden inside the crevasses of American history. Some of these stories are fascinating, but to find them you’ve got to do some serious digging.

History books paint a bleak existence for blacks in America during the end of the nineteenth century. But slavery and bondage weren’t the only lives for a black person in the early 1900s.

Blacks all over the country were building communities to escape persecution from white landowners and the Klu Klux Klan.

MORE: The Antebellum Tale Of Black Slave Girl Molly And The Haunting Of Sorrel-Weed House

While researching some of these communities I came across the story of Georgia native Francis Marion Boyer , who didn’t want to live under the thumb of the Klu Klux Klan any longer.

After the Civil War in 1865, the Klu Klux Klan made it their mission to terrorize blacks all over the country and squash any newly gained civil and political rights by blacks in the south.

The KKK was dangerous their members were able to hide among neighbors and keep their identities a secret. A white person you saw every day could be the same person terrorizing your family once the sunset.

In the late 1890s, a black barber was killed in Georgia by a white man who was eventually arrested and charged with the murder. But during his trial, he was acquitted by an all-white jury in less than 10 minutes. The case infuriated black Georgians all over the state, including Francis Marion Boyer. The south felt like a place that would never be safe if your skin wasn’t of white complexion.

Shortly after the trial, Boyer would have his own life threatened by the Klu Klux Klan. Married with a family, Boyer worried if he didn’t come up with a plan for his family the death threats would continue and his family would never be safe.

Boyer, who attended both Morehouse College and Fisk University was a teacher in Georgia. While in college he learned about homesteading and all of its requirements.

The Southern Homestead Act of 1866 allowed the selling of land for low prices so southerners could afford the land, but only free blacks and white Unionists were allowed to buy land at the time.

By 1876, free blacks entered about 6,5000 homestead claims, which resulted in about 1,000 getting property certificates.

Boyer understood the politics behind homesteading, all he needed was a loan and some land, but where in the world would a community of free blacks be welcomed in America?

Boyer’s father was a Buffalo Soldier during the Mexican-American War and as a child, he heard stories about vast lands in the New Mexico Territory that were free of persecution from whites, but the land was far away. Even though Boyer was free and educated he didn’t own transportation that could get him from Georgia to New Mexico– so, he walked.

In 1899, Francis Boyer and Dan Keyes packed small bags and set up to walk from Georgia to New Mexico to start a new life. It took them almost a year to walk the 2,000 miles across the southern region of the United States.

When Boyer arrived in New Mexico in 1900 he took a job as a cook on a chuck wagon for about three months. He then worked as a ranch hand and a year later would send for his family. They settled in a nearby neighborhood called Rosewell but the plan was to start their own town. In 1903 Boyer and twelve other black homesteaders would create the Blackdom Townsite Company with the idea of creating a self-sustaining community free of white persecution. 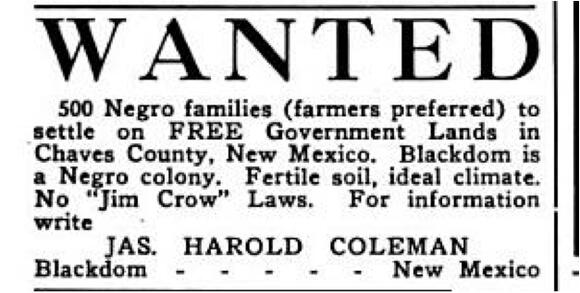 Boyer and his family offered housing for newcomers, they put out ads in newspapers all over the country and promoted free living from blacks. His family also made education a priority amongst the town dynamics. Blackdom established a church that was the home of the town’s community school. By 1908, Blackdom had become a popular back town with 300 residents, local businesses, and a newspaper. Black homesteaders in the 1900s were pioneers for their period, but they still weren’t given access to desirable lands.

Instead, they made do with the deserts of New Mexico until Mother Nature had her way. The town of Blackdom would find its growth stunted but the drought of 1916 and by the late 1920s the town of Blackdom was no more. Most of its residents had deserted the town in search of better lands to cultivate. 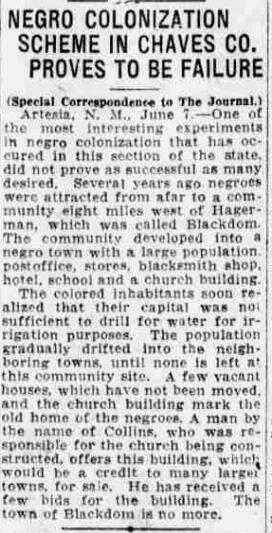 Even though Blackdom was seen as a failure, it truly was a testament to the fortitude of Black people during a time of contestant turmoil and terror. Stories like these are rarely told in the history book, but paint a different picture of black American history. One that shows us we were much more than property to a white slave owner. Now, all that remains from the town a blackdom is a plaque on the side of a highway, but its legacy should never be forgotten.

The Haunting Of Lake Lanier And The Black City Buried Underneath

Why do ignorant people always look for something negative to say??You know who you are, just be happy for someone other than yourself

He was a real American,,,it takes perseverance and faith to have a goal and achieve it. That is how we became great...people not giving up and always seeking a better life.

There was a coal mining town here called Buxton, . 90 percent of the town was black. So yes there were some good times for blacks

Russia sees little optimism in US response on Ukraine crisis

MOSCOW (AP) — The Kremlin said Thursday that there was “little ground for optimism” in resolving the crisis over Ukraine after the U.S. rejected Russia’s main demands, but that dialogue was still possible. Tensions have soared in recent weeks, as the United States and its NATO...
POLITICS・1 HOUR AGO
CBS News

President Biden promised to follow through with his campaign pledge of nominating a Black woman to the Supreme Court. Ed O'Keefe has more details on the top contenders.
CONGRESS & COURTS・1 HOUR AGO
CBS News

Washington — News of Justice Stephen Breyer's expected retirement from the Supreme Court at the end of its current term has reignited questions of who will succeed him, as President Biden's pick is expected to make history. Mr. Biden has pledged repeatedly that if given the chance to fill...
CONGRESS & COURTS・11 HOURS AGO
The Hill

Supreme Court justices on Thursday offered personal reflections on the nearly 28-year tenure of Justice Stephen Breyer following his retirement announcement. Breyer said he plans to leave after the high court's current term ends and after his successor is confirmed by the Senate. Fellow liberal justices as well as the...
CONGRESS & COURTS・2 HOURS AGO

Police search for suspect after 3 officers shot in Houston

Police are searching for a suspect after three officers were shot in Houston on Thursday, the city's police department tweeted. All three officers are in stable condition. The suspect fled in a white Mercedes after the shooting, police said. Authorities did not release any additional details. "Please pray for the...
HOUSTON, TX・1 HOUR AGO
ABC News

Roethlisberger retires at 39: Time to 'hang up my cleats'

LOS ANGELES (AP) — “Jeopardy!” champion Amy Schneider’s dazzling streak is over, snapped Wednesday by a Chicago librarian after 40 consecutive wins and nearly $1.4 million in prize money. Schneider’s success put her in the ranks of Ken Jennings, who’s serving as guest host, and the...
LOS ANGELES, CA・1 DAY AGO
TODAY.com

Spotify says it will remove Neil Young’s music from its streaming platform, after the rockstar said he did not want to share the space with podcaster Joe Rogan, who has been criticized for spreading vaccine misinformation. The streaming service said it regrets Young’s decision but hopes “to welcome him back soon.”Jan. 27, 2022.
MUSIC・11 HOURS AGO

ATHENS, Tenn. (AP) — A Tennessee school district has voted to ban a Pulitzer Prize-winning graphic novel about the Holocaust due to “inappropriate language” and an illustration of a nude woman, according to minutes from a board meeting. The McMinn County School Board decided Jan. 10 to...
TENNESSEE STATE・7 HOURS AGO
CNN

Rate hikes are coming: What does that mean for you?

New York (CNN Business) — The Covid era of free money is coming to an end. After dropping interest rates to zero in March 2020 to revive the economy, the Federal Reserve is shifting gears and going into inflation-fighting mode. Fed officials indicated Wednesday they plan to raise interest...
BUSINESS・6 HOURS AGO