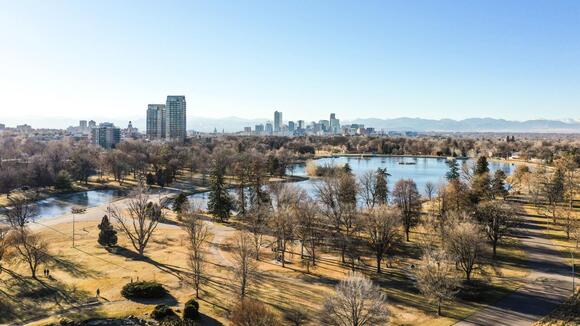 DENVER — The Denver auditor said the city isn't doing enough to keep its parks clean and safe, according to a new report.

The audit was released Thursday afternoon and examines how Denver's Department of Parks and Recreation uses taxpayer dollars on parks. In 2018, Denver voters approved a 0.25% sales tax to support parks, trails and open spaces. The city's Parks Legacy Fund restricts this new revenue to maintaining current and new parks and acquiring additional land for future parks.

Denver Auditor Timothy M. O’Brien, CPA, said the department isn't sufficiently informing the public about when and how the city uses that money.

The audit team visited 10 parks, two dog parks, a park restroom and two properties that were recently acquired using the legacy fund. Using the department's own evaluation criteria, 37.5% of the parks passed and 62.5% did not.

For example, Civic Center Park scored a 29% due to trash, debris, graffiti, vandalism, standing water, missing mulch rings and trees obstructing walkways, according to the report. The Greenway Dog Park scored 14%, with a trench of putrid water, unhealthy trees, weeds and more. City Park also failed, with electrical wires tied to a tree and hung across a walkway.

“When the public sees graffiti, human waste, drug paraphernalia, and unsafe conditions at parks, it’s reasonable for them to wonder where those tax dollars they approved went,” Auditor O’Brien said. “The city has millions to spend but a lot of work to do before the parks are in the condition expected by anyone who cares about our city.”

The audit report noted COVID-19's impact on the department, which had to lay off more than 1,000 part-time employees, reduce seasonal staff by 55% and furlough about 75 employees. As a result, the department estimated it had about 100,000 fewer hours staffed for park maintenance.

“Both the long-term and short-term health of the parks system are imperative,” O’Brien said. “Buying new land to give more people access is important, but so is keeping the parks we have clean and safe so they will last for all future generations.”

In addition, the audit found that communication to the public about the Parks Legacy Fund revenue was lacking and of the 42 projects the audit team reviewed, 32 are using the funds and only three of those contained communication related to the fund.

O'Brien said the department could use its website, social media accounts or signs in the parks to fix this.

“The people of Denver have told me they want to know when the tax dollars they voted to approve are used,” O’Brien said. “Showing how the money is making a difference could help people see the value and impact in the community.”

Leaders of the Department of Parks and Recreation agreed with the recommendations outlined in the audit, which include:

While the department agreed to each recommendation, O'Brien said he remains concerned about their commitment to making the changes, noting that the agreements seemed "half-hearted."

you think? every denver park I have ever taken my kids to are filled with vagrants that are using the public space as a safe haven to shoot up and drink - all while harassing the law abiding patrons.

The Regional Transportation District has installed security cameras aimed at protecting cars inside a Boulder Park-N-Ride garage that is a hotspot for catalytic converter theft.
BOULDER, CO・11 HOURS AGO
Denver7 News KMGH

The Suncor Refinery has been closed for weeks now, but the neighborhood that lies in its shadow is as open as over.
DENVER, CO・1 DAY AGO
Denver7 News KMGH

The City of Boulder has launched a new grant program to help homeowners whose manufactured houses were damaged by the hurricane-force winds during the 2021 Marshall Fire.
BOULDER, CO・3 DAYS AGO
Denver7 News KMGH

A bill that would allow for local governments to pass rent stabilization measures was introduced in the Colorado state legislature Monday.
COLORADO STATE・3 DAYS AGO
Denver7 News KMGH

A family who once experienced chronic homelessness and domestic violence were in for surprise Wednesday when they learned an SUV was purchased for them thanks to Denver7 Gives viewers.
DENVER, CO・2 DAYS AGO
Denver7 News KMGH

After two crashes into emergency vehicles in the Denver area in just the last week, CSP and CDOT are pleading with drivers to slow down and move over from crash responses.
DENVER, CO・13 HOURS AGO
Denver7 News KMGH

Bitter cold across the Denver metro area by Sunday

A bitter cold air mass will settle in this weekend. Heavy snow for the northern mountains, light snow for Denver and the eastern plains
DENVER, CO・2 DAYS AGO
Denver7 News KMGH

A 21-year-old from Loveland has been charged by criminal complaint with setting fire to a Loveland church.
LOVELAND, CO・19 HOURS AGO
Denver7 News KMGH

Bonsai Nursery was a popular family-owned anchor in Sheridan for the past 60 years. In its next chapter, the property will be the site of an affordable housing complex.
SHERIDAN, CO・3 DAYS AGO
Denver7 News KMGH

Bitter cold and snow on the way this weekend

Our next storm will usher in some bitter cold air this weekend. Highs will top out near 30 degrees in Denver Saturday, with light snow developing. Highs will only be in the teens Sunday and Monday!
DENVER, CO・1 HOUR AGO
Denver7 News KMGH

A woman filed a lawsuit against a Platteville sergeant and two Fort Lupton officers — as well as both police departments — who arrested her and placed her in a patrol car that was then hit by a train.
FORT LUPTON, CO・17 HOURS AGO
Denver7 News KMGH

Every weekend, Denver7 compiles a list of some fun events you might enjoy. Here are our picks for the 7 best things to do in the Denver metro area and beyond this weekend.
DENVER, CO・2 DAYS AGO
Denver7 News KMGH

Randall’s in Denver’s Cole neighborhood has been serving up Cajun-inspired cuisine for nearly two decades. But the neighborhood restaurant is in danger of closing soon.
DENVER, CO・1 DAY AGO