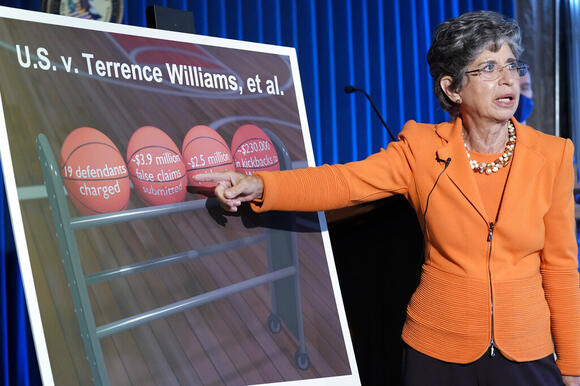 Eighteen former National Basketball Association players have been indicted on charges they participated in a conspiracy to defraud an NBA health care plan of nearly $4 million, federal authorities said Thursday.

The scheme lasted from at least 2017 through last year and involved the submission of fraudulent claims for reimbursement of medical and dental services that had not actually been provided, according to a federal indictment unsealed in Manhattan.

For the most part, the 18 former players charged in the scheme played in the NBA in the late 1990s and the 2000s. Two of the most notable are Ronald Glen Davis, nicknamed “Big Baby,” and Tony Allen, both of whom played on the Boston Celtics team that won the NBA championship in 2008.

Allen, now 39, was one of the league’s best defensive players during his career and is scheduled to have his number retired by the Memphis Grizzlies, where he played seven seasons, next year.

Others charged included promising prospects whose careers did not reach the heights that had been expected, including Darius Miles and Sebastian Telfair, both of whom were drafted out of high school.

The indictment said that one of the former players, Terrence Williams, who played for the New Jersey Nets and the Houston Rockets, had orchestrated the scheme and recruited other former players by offering to supply them with false invoices to support their fraudulent claims. The indictment charges that Williams also received $230,000 in kickbacks in the scheme.

The conspirators submitted claims totaling $3.9 million, and they ultimately received about $2.5 million in fraudulent proceeds, according to the indictment.

The charges were announced in New York on Thursday at a news conference held by Audrey Strauss, the U.S. attorney for the Southern District of New York, and Michael J. Driscoll, the head of the FBI’s New York office.

Strauss said that the investigation was ongoing.

Several of the players charged played at least part of their career for New York-area teams, including Shannon Brown with the New York Knicks, and Williams, Antoine Wright and Chris Douglas-Roberts with the Nets.

Others gained fleeting instances of fame, like Milton Palacio, who in 2000 hit a memorable buzzer beater against the Nets, and Ruben Patterson, who was said — perhaps apocryphally — to have called himself the “Kobe Stopper,” for his purported ability to slow down Los Angeles Lakers superstar Kobe Bryant.

Telfair, a cousin of former NBA star Stephon Marbury, graced magazine covers as one of the best high school players in the country when he played at Brooklyn’s Lincoln High School in the early 2000s. But he was dogged by legal troubles related to weapons during his professional career, which included early stints with the Portland Trail Blazers and the Celtics.

In 2008, Telfair pleaded guilty to illegal handgun possession and was sentenced to three years probation. In 2019, he was sentenced to 3.5 years in prison for gun possession, this time stemming from an arrest two years earlier, when he was found with four loaded guns and a bulletproof vest.

why though? they are making millions why do they have to still try to cheat?

they thought the law was above them. a thief will get caught sooner or later! guess there parents never told them honesty is the best policy! hope they are charged to the fullest extent!

They should take a knee. All that oppressed money and white privilage. Oh wait.

LeBron James sent the rest of the basketball world a message about his son’s future in the sport on Friday. The Los Angeles Lakers star posted a video of Bronny throwing the basketball off the backboard and doing a windmill dunk. LeBron focused on the incredible hops his son has.
NBA・13 DAYS AGO
Larry Brown Sports

The brief glimmer of hope for Kyrie Irving to return to the court for the Brooklyn Nets this season seems to be fading away. New York City mayor-elect Eric Adams appeared Friday on CNN and was asked specifically about Irving, who remains ineligible to play due to the city’s COVID-19 vaccine mandate.
NBA・21 DAYS AGO
Sports Illustrated

The Golden State Warriors crushed the Brooklyn Nets 117-99 on Tuesday night to improve to a 12-2 record, which is the best in the NBA. Meanwhile, the Nets fell to 10-5, (but they did rebound on Wednesday night beating the Cleveland Cavaliers 109-99 to improve to 11-5). Kevin Durant was...
NBA・8 DAYS AGO
firstsportz.com

While the NBA Players are known to work their way in the gym, day-in and day-out, they are also known for dawning the most outrageous style and Kyle Kuzma’s pre-game outfit in Washington Wizards latest game against the Charlotte Hornets only goes to justify the same. As a result, of which many NBA stars also commented upon the same.
NBA・3 DAYS AGO

The Golden State Warriors are sailing through the League smoothly like butter, and Stephen Curry is just being flawless o the court with his skills. They are destroying almost all the teams they face with the same dominance and intensity but it’s Curry who has won more fans than haters.
NBA・3 DAYS AGO
ClutchPoints

Steve Nash has made no secret that this is an experimental time for his team. The Brooklyn Nets fell to the Miami Heat on Wednesday, 106-93. Brooklyn is now 2-3, having lost twice at The Clays. Steve Nash, Kevin Durant, and company are looking for any spark rotational standpoint. “We...
NBA・29 DAYS AGO
fadeawayworld.net

Devin Booker is one of the most talented young players in the NBA right now, having played in the 2021 Finals and leading the Phoenix Suns alongside Chris Paul in a season where nobody believed in them. He's very talented with the ball in his hands and one of the...
NBA・10 DAYS AGO
chatsports.com

The Los Angeles Lakers secured a much-needed win on Monday night against a surging Charlotte Hornets side, and yet again, 10-time All-Star Carmelo Anthony came up big for LA. This was not the first time Melo saved the day for the struggling Lakers, and for his part, Memphis Grizzlies star Ja Morant just had to call out Anthony’s haters after his heroics against the Hornets.
NBA・16 DAYS AGO

Los Angeles Lakers guard Russell Westbrook made waves on social media on Friday after he crip walked during the team’s game against the Cleveland Cavaliers. Lakers superstar LeBron James proceeded to react to Westbrook’s moves, joking that “something is really wrong” with the nine-time All-Star. It’s good to see that...
NBA・27 DAYS AGO
ClutchPoints

A lot of people from in and around the NBA have chimed in on the incident involving Los Angeles Lakers superstar LeBron James and Isaiah Stewart of the Detroit Pistons. LeBron got ejected for just the second time in his career for a supposed inadvertent blow to Stewart’s head that left the youngster’s face all covered in blood.
NBA・2 DAYS AGO
ClutchPoints

Boston Celtics big man Enes Kanter recently made headlines after he went on an all-out attack on Los Angeles Lakers superstar LeBron James and his alleged ties to China. Unsurprisingly, Kanter has United States Senator Ted Cruz backing him in his corner as the outspoken Republican also went on an unfiltered tirade against LeBron.
NBA・5 DAYS AGO
FastBreak on FanNation

Kevin Durant was thrown out of the game between the Detroit Pistons and Brooklyn Nets on Sunday in Brooklyn.
NBA・24 DAYS AGO

The Golden State Warriors were a dynasty in the mid-2010s era of basketball, and their duo of Stephen Curry and Klay Thompson revolutionized the sport, changing the way the game was played. In recent years though, Klay Thompson has had two serious injuries, first to his ACL in 2019, and...
NBA・26 DAYS AGO
ClutchPoints

The Los Angeles Lakers are in the midst of a roller-coaster campaign that, for the most part, has not lived up to the expectations. Los Angeles is 7-6 on the season and has been incredibly disappointing so far, especially for Lakers fans. Every loss in La La Land is magnified. But their ugly 107-83 defeat to the Minnesota Timberwolves at home on Friday night deservingly warranted the negative headlines and the boos from the Staples Center crowd.
NBA・13 DAYS AGO
FanSided

Brooklyn Nets star Kevin Durant has seen plenty of ups and downs since he joined the NBA in 2007. His journey began in Oklahoma City and then took him to Golden State up until he signed with Brooklyn two summers ago. Thunder fans still haven’t forgotten about him signing with the Warriors in free agency, but it clearly worked out for Durant because he went on to win two titles.
NBA・3 DAYS AGO
Larry Brown Sports

LeBron James was ejected for throwing a dirty elbow/slap at Isaiah Stewart during Sunday’s game between the Los Angeles Lakers and Detroit Pistons. The players were lined up under the basket as Jerami Grant attempted his second of two free throws in the third quarter. James was getting boxed out and struggling with Stewart for positioning. Upset about being boxed out, James appeared to throw an elbow/slap at Stewart’s face:
NBA・5 DAYS AGO
fadeawayworld.net

Last Thing Jimmy Butler's Mom Said To Him Before She Kicked Him Out At 13: "I Don’t Like The Look Of You. You Gotta Go."

Jimmy Butler has gone from an underdog in the NBA to one of its most respected players. Few people expected Butler to have the success that he did in the NBA when he first entered. And if we look back at his life, Butler did not have an easy road to the NBA.
NBA・1 DAY AGO
The Spun

A photo of LeBron James watching the fight between the Los Angeles Lakers and the Detroit Pistons is going viral on social media. Tensions boiled over for the Lakers and the Pistons on Sunday evening and LeBron was right in the mix of things. James was ejected from the contest...
NBA・5 DAYS AGO
Lakers Daily

During the Los Angeles Lakers’ Wednesday win over the Indiana Pacers, LeBron James asked to have two fans sitting courtside at Gainbridge Fieldhouse escorted out. Turns out the fans were taunting James in a malevolent way. The four-time MVP may be one of the world’s most popular athletes, but he...
NBA・1 DAY AGO
The Spun

Frustrations boiled over for Kevin Durant and the Brooklyn Nets during the Pacers game on Friday night. Late in the third quarter with the Nets leading 71-67, Durant led a fast break before he was fouled by Pacers guard T.J. McConnell. Durant almost immediately threw the ball into the stands out of frustration and was issued a technical foul, as a result.
NBA・27 DAYS AGO