Suddenly, Sean Hannity and other Fox Hosts are urging their viewers to get COVID-19 vaccines 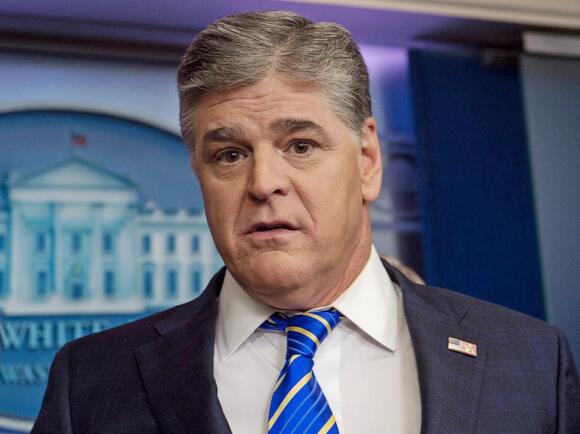 Several Fox News hosts, including Sean Hannity, threw their support behind COVID-19 vaccines on Monday, a sharp departure from the network's often-sceptical coverage.

Hannity on Monday urged viewers to get vaccinated. He encouraged them to take the pandemic "seriously" and said he believed in the "science of vaccines."

He urged viewers to "research like crazy" and come to a decision on the vaccine with their medical provider.

"Take it seriously. You also have a right to medical privacy, and doctor-patient confidentiality is also important," he stated. "And it absolutely makes sense for many Americans to get vaccinated. I believe in science, I believe in the science of vaccination."

However, before declaring his support for vaccines, Hannity was critical of universities for mandating vaccinations. The stance came in response to a federal judge's decision to uphold an Indiana University policy requiring students and staff to be fully vaccinated before returning to campus.

The Hill reported that in two separate segments of "Fox & Friends," hosts Steve Doocy and Bill Hemmer both spoke positively of vaccines.

"If you have the chance, get the shot, it will save your life," Doocy said.

Tucker Carlson was a notable exception, continuing to question the vaccines on his Monday night show, as Insider's Tom Porter reported . He appeared to disparage other journalists who offer "medical advice on television."

The switch in tone comes after outlets including The New York Times and Insider ran stories detailing statements made by Carlson and Laura Ingraham that were against expert public health advice on vaccines.

It also comes after a CNN report that, while hosts like Carlson have attacked vaccine passports, the media corporation has rolled out its own version of the vaccine passport.

Fox news has been lying to it's viewers/constituents since the pandemic did they realize they were killing off their voters? The hosts are vaccinated Trump vaccinated viewers oh they attacking ppl wearing masks and telling lies about the vaccine

Tucker has been vaccinated. Just like all the GOP pundits and your lord Trump.....they all preach against the vaxx to you cult members, but secretly get it themselves. That's how little they care about you folks!

🤣🤣🤣🤣🤣 Fox is about to be sued. I thought Ingraham would be the one next but Hannity beat her to it after sissy boy Tucker confessed.

The daughter of an unvaccinated man who died of COVID-19 spoke to CNN about her father. Katie Lane said her father "watched some Tucker Carlson videos on YouTube" concerning vaccines. She said her 45-year-old father wasn't opposed to all vaccines, but was influenced by misinformation. The daughter of an unvaccinated...
PUBLIC HEALTH・15 HOURS AGO
Fox News

In his Opening Monologue on Monday, Sean Hannity criticized the vacationing President Joe Biden as thousands of illegal immigrants continue amassing under the Acuna International Bridge in Del Rio, Texas – and as the administration seeks to enforce sweeping vaccine mandates on American citizens while offering those individuals who broke our laws to get here a glaring carveout from the edict.
DEL RIO, TX・8 HOURS AGO
Commonwealth Journal

Comedy Central host Trevor Noah calls for an end to the "do your own research" line used repeatedly by Fox host Sean Hannity when it comes to getting educated on Covid vaccines. CNN's Brian Stelter reports.
ENTERTAINMENT・1 DAY AGO
Fox News

Fox News Channel's ratings success continued as it beat struggling CNN and MSNBC for the 30th consecutive week in both primetime and total day viewers last week. From September 6-12, Fox News not only bested its direct cable news competition, it beat them combined in both primetime and total day in total viewers and in the coveted 25-54 age demographic. Meanwhile, the latter channels saw a number of recent lows.
TV & VIDEOS・6 DAYS AGO

'It's your body, his choice': Sean Hannity slams Biden for using unvaccinated Americans as a 'political scapegoat' with sweeping COVID-19 vaccine mandate despite inaugural pledge for unity

Fox New host Sean Hannity slammed President Joe Biden for using unvaccinated Americans as a 'political scapegoat' while implementing a sweeping nationwide COVID-19 vaccine mandate, despite pledging for unity at his inauguration seven months ago. 'It's your body, his choice,' the Hannity said on Friday. 'With an unconstitutional, illegal, unethical...
PHARMACEUTICALS・10 DAYS AGO
Washington Post

During the four years of Donald Trump’s presidency, the 9 p.m. hour on Fox News hosted by Sean Hannity was the go-to spot for tame interviews with the administration’s key players and top cheerleaders, including many sit-downs with Trump himself. The man in the White House has changed, but the...
PRESIDENTIAL ELECTION・11 DAYS AGO
Daily Beast

“Several polls, including one by Fox News itself, have now shown that President Biden’s vaccine requirements and other COVID measures are widely popular,” Seth Meyers noted at the top of his latest “A Closer Look” segment Monday night. “So Republicans and right-wing pundits have been forced to come up with increasingly insane arguments against them.”
U.S. POLITICS・5 HOURS AGO

Fox News host Bill Hemmer said Monday that he had walked out of a restaurant in New York City after employees asked to see a photo ID along with his COVID-19 vaccination card. “I popped into a restaurant three weeks ago,” he said during a segment on the city requiring proof of vaccination for many indoor activities, including dining. “I said, ‘I don’t have my vaccination card, but I do have an app,’ so I downloaded that and I showed it to them. And they said, ‘Sir, can we see something with your name on it?’”
NEW YORK CITY, NY・7 DAYS AGO
citywatchla.com

We Fact-Checked Fox News' Racist Lie. It Turns Out, the Pandemic Is Worse in Republican States

"Both men, both governors, face tough reelection campaigns. Both men just want to be loved by Donald Trump and the people who love him," Williams said Friday.
IMMIGRATION・2 DAYS AGO
Newsweek

Previously, the senator reportedly told Trump he had been "written off as dead" because of the U.S. Capitol riot.
POTUS・4 DAYS AGO

CNN host Brian Stelter has been slammed for tweeting a claim that the 'real leaders' of 9/11 were news anchormen - and adding that 'political leaders were in bunkers or out of sight'. Stelter tweeted a quote from an article written by AP writer David Bauder, saying: 'Network TV anchors...
U.S. POLITICS・9 DAYS AGO
bartlesvilleradio.com

Kellyanne Conway is going to be in Charge of Trump's 2024 Campaign: "You didn't have the swagger."

After the defeat of former President Donald Trump in the 2020 US Presidential Election, his previous campaign manager Kellyanne Conway told the man from Queens that he needed to step back and go back to the basics in order to have a good result at the 2024 elections if he decides to run.
18 HOURS AGO
Washington Post

In case you need more evidence of how much damage keeping the filibuster might end up doing, add this to the list: It could make a future stolen presidential election more likely. This is thrust upon us by new revelations about the extent of Donald Trump’s efforts to overturn his...
PRESIDENTIAL ELECTION・21 HOURS AGO
Markets Insider

Pelosi and Schumer said they would attach a debt-ceiling suspension to the government-funding bill. McConnell quickly struck down the idea, saying the GOP would not vote for the legislation. They effectively dared him to vote for the US to default on its debt, and he met their dare. As the...
PRESIDENTIAL ELECTION・15 HOURS AGO
Newsweek

Right-Wing Activist Josh Bernstein, a Fierce Critic of Masks and Mandates, Gets COVID

Bernstein, who said he contracted COVID while speaking at an event on September 13, said he is receiving Ivermectin to treat his illness.
PUBLIC HEALTH・16 HOURS AGO
Business Insider

San Francisco London Breed defended herself for taking photos maskless in a nightclub without a mask despite the city's indoor mask mandate.
PUBLIC HEALTH・14 HOURS AGO
WashingtonExaminer

There was a chance that President Joe Biden would end a streak dating back to Bill Clinton of new presidents losing control of Congress in their first two years.
PRESIDENTIAL ELECTION・22 HOURS AGO