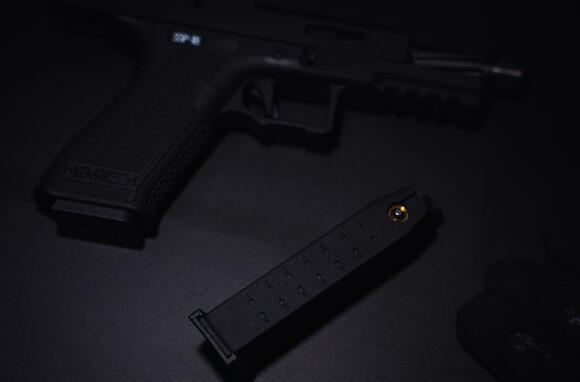 The incident, which took place at 1 a.m. Wednesday morning, involved Tejuan Myron Jones of Westland, Marquese Gadson of Detroit and a third person inside a black 2008 Audi found in a rollover accident that police found resting on a 2105 Ford Fusion after striking three other vehicles.

According to police, Jones, the driver of the car, and Gadson, a passenger, were traveling south on Rein Avenue in the Audi and "were brandishing a high-powered AR-15 style Airsoft gun with a green laser and possibly another weapon."

Investigators said two witnesses on their porch saw the slow-moving vehicle on their street and then realized that the Airsoft lasers were aimed at them.

The witnesses say they heard shots coming from the weapons, while one of them claimed he had been shot in the leg. Despite this claim, however, there was no visible injury.

After fleeing the area the group was confronted by police. Both Jones and Gadson started to point what appeared to be the lasers at their windshield. Jones then placed the vehicle into reverse and accelerated at a high rate of speed striking several parked vehicles.

Both men are facing multiple charges. The third person in the Audi has not been charged.

(OAKLAND COUNTY, Mich.) On Thursday, Terell Josey was charged on multiple counts in the aftermath of the deadly shooting of Detroit Fire Department Lt. Frank Dombrowski earlier in the week, Click On Detroit reports.

Detroit firefighter shot to death at Oakland County gas station, suspect turns himself in to authorities

(OAKLAND COUNTY, Mich.) After an alleged road rage altercation Monday evening at a gas station in Troy, Michigan, a Detroit firefighter was shot to death, The Detroit News reports.

Two killed after their car crashes into St. Clair river

(Scott Rodgerson/Unsplash) (ST CLAIR COUNTY, Mich.) On Sunday, an 83-year-old man and an 86-year-old woman died after their car went into the St. Clair river, The Detroit News reports.