Insider Families is a Colorado-based family travel publisher. We love the great outdoors. We feel grateful to live in the mountains of Colorado and see first hand how climate change is impacting our winters. It is important to us that we share with our readers and followers how they can help preserve what makes a place special. We make a point to learn about the local history and environment of the places we visit. When we visit the Golden Isles of Georgia you will find us making a stop at the Sea Turtle Sanctuary and learning about this endangered species. We return home with books on the subject and a desire to share that knowledge. We love nature and like to spend as much time in it as possible whether hiking a mountain, riding the BMX track, soaring down an alpine coaster or trying a new sport at the beach or lake.

Posted by
InsiderFamilies
30 days ago 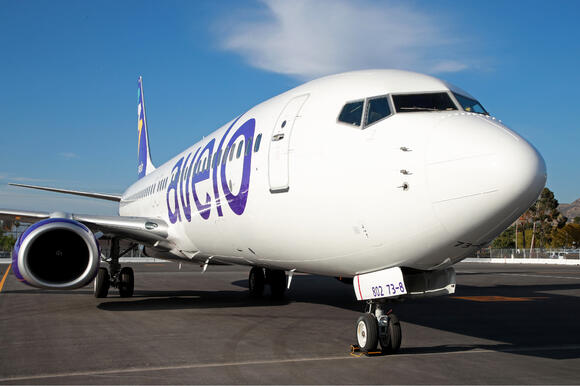 On April 28, 2021 a new low-cost airline launched operations from HollyWood Burbank Airport (BUR) in the Los Angeles area. America's first new mainline airline in nearly 15 years — Avelo Airlines — is quickly ramping up to serve eleven markets. Grand Junction Airport is on of these and saw its inagurat Avelo Flight on May 9. Introductory one-way fares start at $19 on all routes.

"Avelo has a simple purpose — to Inspire Travel," said Avelo Founder, Chairman and CEO Andrew Levy. "People are ready to reconnect with family and friends and explore new places. Avelo is a different and better kind of airline, built from scratch to offer an affordable, convenient and caring travel experience."

This new route from the west coast also offers residents there easier access to some of Ameroca's great national parks. Grand Junction is a convenient jumping off point to nation parks both in Colorado and Utah.

The airline will initially operate single-class, fuel-efficient 189-seat Boeing 737-800 aircraft – offering a more comfortable experience than the regional aircraft often utilized by the airports Avelo serves. Avelo's surprisingly low everyday fares include no change fees or call center fees for Customers who choose to make reservations by phone. Fees for checked bags, carry-on roller bags and pets in the cabin range from $10-$95.

Avelo is operating a fleet of next-generation Boeing 737 aircrafts provideing non-stop service between 11 destinations across the Western U.S. and its initial base at Hollywood Burbank Airport.

I know that I've already browsed flights and am considering a flight just because it could be an easy and fun getaway from our home in Eagle, Colorado. After all Southern California is a popular family vacation destination. Would you book a flight on Avelo? Tell us in the comments below!

Insider Families is a Colorado-based family travel publisher. We love the great outdoors. We feel grateful to live in the mountains of Colorado and see first hand how climate change is impacting our winters. It is important to us that we share with our readers and followers how they can help preserve what makes a place special. We make a point to learn about the local history and environment of the places we visit. When we visit the Golden Isles of Georgia you will find us making a stop at the Sea Turtle Sanctuary and learning about this endangered species. We return home with books on the subject and a desire to share that knowledge. We love nature and like to spend as much time in it as possible whether hiking a mountain, riding the BMX track, soaring down an alpine coaster or trying a new sport at the beach or lake.

RV trailer parked near Great Sand Dunes National Park.(Photo by Liana Moore.) There are some fantastic RV parks are located near Colorado’s national parks, monuments and state parks. RVing is a great way to be able to immerse yourself in nature and some of Colorado’s most special places with a bit more comfort than tent camping.

Jeeping is a fun way to see Colorado mountain views.(Photo by Brett Sayles from Pexels.) Have you ever experienced any of the many jeep trails in Colorado? If not, you’re missing out on the opportunity to explore new places while enjoying a fun and bumpy ride with loved ones. Colorado is home to dozens of unique jeep trails. Be sure to check out this list of five of the best trails to visit when riding in your 4-wheel-drive vehicle in Colorado.

Things to Do in Vail, Colorado this June

One of our favorite lakes to stand up paddle board in the Vail, Colorado area.(Photo by Liana Moore.) Vail, Colorado is a popular summer resort area. June really kicks off the summer season. Vail Village is quieter in June than it is in July. But there's still plenty to do. Find out our top picks of fun things to do in Vail this June!

9 of the Most Kid-Friendly Restaurants in Vail, Colorado

Anytime you can dine outdoors in Vail, it will be a kid-friendly dining experience.(Photo courtesy VLMDAC/ Jack Affleck.) One of the many things that Vail, Colorado is known for is its fantastic chefs and restaurants. While many of these dining options are high end, there are also many kid-friendly Vail restaurants. Let us tell you about them!

One-million dollars will be awarded to five lucky Colorado residents ages eighteen and up who have had a least their first vaccine.(Photo courtesy Pixabay.) The Colorado Lottery on behalf of the Colorado Department of Health & Environment (CDHPA) will be randomly drawing one $1 million winner on each of the following five dates: June 4, June 11, June 18, June 25 and July 1. To be eligible for the June 4 drawing all that Coloradans ages 18 and up need to do is have had at least their first dose of the COVID-19 vaccination by the end of May.

Sunset at Fairmont Orchid, home to Hawaiiloa Luau.(Photo by Liana Moore.) If you’re planning to visit Hawaii in the coming months, one thing you will want to experience is a luau. The luau is a feast in Hawaii where guests enjoy fresh food from the island while watching live performances. You’ll see dancers doing the hula while wearing festive outfits and greeting guests.

View from Garden of the Gods in Colorado Springs.(Photo by Liana Moore.) It’s no wonder why Colorado Springs draws in so many visitors each year. Whether it’s due to the beautiful scenery the countless family-friendly activities, or the outdoor sports that are in the area, the city has it all.

Landscape of Colorado National Monument at sunset.(Photo by Liana Moore.) The state of Colorado is diverse, from plains to mountains. And, so are the national parks located in the state. From beautiful alpine mountains to sandy dunes to ancient Pueblo cliffside dwellings there is something for everyone. Summer is a wonderful time to explore these natural wonders. So, make your plans now!

Where to Stay on the Big Island of Hawaii

Stunning coastline of the Big Island of Hawaii.(Photo by Liana Moore.) The island of Hawaii is the largest and most diverse island in the state. If you’re considering a Hawaiian vacation, you may be wondering which place is best to visit. Hilo and Kona are two of the popular areas on Hawaii island and both have much to offer. If you’re feeling indecisive about the area that you should stay and visit, read on.

Biking on Snowmass Mountain in Colorado.(Photo courtesy Aspen Skiing Co./ Matt Powers Photography.) All of Colorado's mountain towns are fun family destinations. While most popular during the winter for skiing, we actually love them most in the summers. Sunny days, cool evenings and an abundance of outdoor activities in a beautiful alpine setting make these mountain towns an ideal weekend or weeklong getaway.

NASA Earth took to Twitter to share an image with their 2.1 million followers as part of the 'May Puzzler' challenge, asking the public if they could identify a spot based on a photo taken by a satellite. They provided a few clues, including that the ski resort has more...

GYPSUM — Darla Letourneau is ready for an adventure of a lifetime. “This is the first time I’ve ever done anything like this by myself,” the 72-year-old Floridian said as she circled and studied her brand new Promaster van, custom converted by Dave & Matt Vans. Letourneau is planning to...

The Palisade High School Fish Hatchery released their first school of endangered native fish, razorback sucker fish, into the Colorado River. After years of planning and raising money, Palisade High School broke ground on their new fish hatchery on April 2, 2019, and by August 2020, their hatchery was up and running. The high school turned a storage building into a fish sanctuary with three 230-gallon tanks with 150 fish in each tank.

Colorado Bar Requiring Proof of COVID-19 Vaccine to Sit Inside

While you are starting to hear of major corporations like Target, Costco, and Starbucks drop the mask requirements within their stores for fully vaccinated employees and customers some Colorado business owners are going in the other direction. It was LEX 18, that gave us the heads up about Bar Max here in Colorado that is requesting proof of vaccine from customers and employees if they want to remove their masks and dine indoors.

McMillin: Want a home in Colorado’s mountains? Best prepare for wildfires and floods.

JACKSONVILLE, FL, USA, May 17, 2021 /EINPresswire.com/ — We Insure, the innovative independent insurance company, announced today the opening of a new franchise agency to serve the residents of the Denver Metro area from Greenwood, Colo. We Insure added more than 50 franchises across 14 states in 2020 and anticipates record growth in 2021.

Long Work Hours Tough on Health – How Does Colorado Measure Up?

Your job may have a greater impact on your health than you think. Ever get to the end of a long work week and just feel completely run down? We know that our jobs have an immense effect on the way we feel. Heck, we probably feel run down after just a few hours at the office. If that's the case then you might want to consider a different job.

It’s stargazing season again, as temperatures are heating up and the skies are getting clearer with each passing night. Are you excited? We sure are, which is why we are spreading the good news that Colorado is home to yet another International Dark Sky Park (our fourth, to be exact!) via the clear and beautiful Mesa Verde National Park: