The Nintendo Switch Has Been Sold Out for Months, But It’s In Stock for Cyber Monday 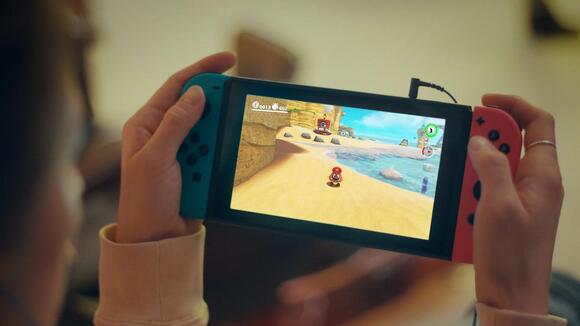 The Nintendo Switch has been nearly impossible to find for the past few months thanks to increased demand, and supply constraints due to Covid-19, but the gaming console is in stock at Amazon right now .

Orders placed now will ship soon, and deliver in the first week of December. 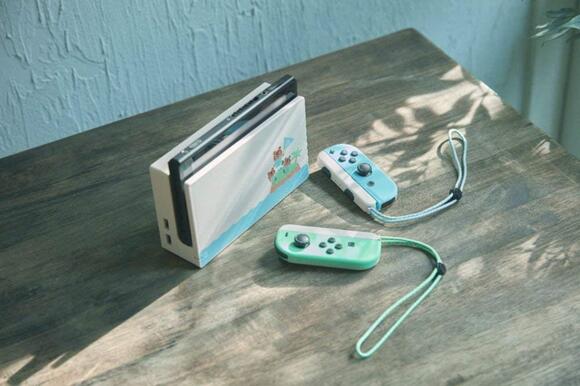 The Switch is a portable gaming system with an HD touch screen, and a pair of detachable “Joy-Con” controllers on either side. The console comes with a “dock” accessory that allows you to play games on your TV — often in a higher resolution. The consoles hybrid nature makes it an excellent choice for gamers who want to take a single library of HD games with them everywhere they go. One of the reasons for the Switch’s popularity is its impressive roster of games , including the latest entries in its popular Super Mario and The Legend of Zelda series.

Games can be purchased as physical game cards, or downloaded to the system’s internal memory. Although it only comes with 32GB (gigabytes) of storage, you can increase it easily by popping in a MicroSD Card at any time. You can consult our full guide if you’re interested in learning more about the best Nintendo Switch accessories .

Third-party sellers on various e-commerce sites have taken advantage of the current Switch shortage to charge far more than the console’s $299.99 retail price, which is why finding one in stock is actually a great deal. The problem is that the console rarely stays in stock for very long, so if you’ve been on the lookout for one, now is the time to act. See all Nintendo Switch deals at Amazon .

Years Before Neil Young Took on Spotify and Joe Rogan, He Bashed Starbucks Over GMOs

Neil Young published a letter on his website Monday afternoon demanding that Spotify remove all of his music. “I am doing this because Spotify is spreading fake information about vaccines — potentially causing death to those who believe the disinformation being spread by them,” he wrote. “Please act on this immediately today and keep me informed of the time schedule. “I want you to let Spotify know immediately TODAY that I want all my music off their platform,” he continued. “They can have [Joe] Rogan or Young. Not both.” He took down the letter after just a few hours, but it had...
CELEBRITIES・2 DAYS AGO
Rolling Stone

Kyrsten Sinema’s election to the Senate in 2018 was one of the Democratic Party’s few bright spots in an otherwise disappointing election. Democrats took back the House by a slim margin, but actually lost seats in the Senate, narrowly squeezing Sinema into the open slot left by Jeff Flake’s retirement. Democrats arguably knew who Sinema would be going in — she had said her Senate role model was Joe Manchin and amassed a shockingly pro-Trump voting record while in the House — and her first days in office basically confirmed this. Still, I doubt many of the party’s top brass...
CONGRESS & COURTS・2 DAYS AGO
Rolling Stone

It’s funny to think about the J.D. Vance of 2016. At the time, hot on the heels of his staggeringly successful memoir Hillbilly Elegy, he was a liberal darling, the media’s chosen intermediary between their ivory towers and the unwashed masses that mysteriously swept Donald Trump into power that November. Vance was a man of both worlds: Yale-educated, Kentucky-raised, and building a powerful mythos around himself as the personification of a united America, while the country around him grew ever more divided.  It seems inevitable that Vance would see this myth as one that people would vote for, but somewhere along...
OHIO STATE・1 DAY AGO
The Motley Fool

These stocks are perfect for value investors looking to buy and hold for the long term.
STOCKS・2 DAYS AGO

Recommendations are independently chosen by Reviewed’s editors. Purchases you make through our links may earn us a commission. The new OLED Switch is the best Switch right now, but it’s not much of a reason to upgrade if yours still works. Of course, a lot of people have...
VIDEO GAMES・12 DAYS AGO
Nintendo Life

Japanese virtual idol Hatsune Miku will soon be making a return to the Nintendo Switch in a brand new puzzle game. It's called Hatsune Miku: Tsunageru Puzzle Tamagotori, and alongside the announcement we've got some key artwork. No other details have been announced yet, but fingers crossed it's eventually localised.
VIDEO GAMES・13 DAYS AGO
Creative Bloq

The super popular Nintendo Switch OLED only got released on 8th October 2021, so we're surprised, and very happy, to report that it is currently enjoying its first UK price drop, over at The Game Collection. Right now, you can get the white Nintendo Switch OLED console for £299.95, down from £314.95.
VIDEO GAMES・8 DAYS AGO
gamespew.com

SNK vs Capcom: Card Fighters’ Clash is Out Now for Nintendo Switch

Square Enix has confirmed the release date for the cloud versions of the Kingdom Hearts collection on the Nintendo Switch. The collection will launch on February 10 with free playable demos for Kingdom Hearts 1.5+2.5, 2.8 and III all available today (January 18) on the eShop. Currently, all three of...
VIDEO GAMES・9 DAYS AGO
Nintendo Life

Nintendo Switch Was The UK's Bestselling Console In 2021

Mario Kart 8 Deluxe led Switch physical sales, of course. Nintendo has been enjoying consistently strong sales results around the world, and one small example is the UK market. We have the benefit of regular data for UK game sales, and now GamesIndustry.biz has put together an interesting summary of results for 2021, which brings more positives around the Switch and its ongoing popularity.
VIDEO GAMES・9 DAYS AGO
Nintendo Enthusiast

It’s hard to believe, but we are just weeks away from the fifth anniversary of the launch of Nintendo Switch. In the years since that day, Switch has gone on to break sales records and become one of the most successful Nintendo consoles to date. Much of that is owed to its portability and stellar library, and each year of the console has given Nintendo fans something to brag about. Whether it’s the accomplishments of The Legend of Zelda: Breath of the Wild or the perfectly timed release of Animal Crossing: New Horizons, Switch has always had something special to offer gamers. However, some years’ game lineups are more impressive than others, so let’s discuss how they compare and grade each year that Nintendo Switch has been on the market so far. We’re grading on a scale ranging from “F” to “S.”
VIDEO GAMES・10 DAYS AGO
411mania.com

VICO Game Studio has announced that they will release the new game Action Arcade Wrestling on the Nintendo Switch next month. It features an arcade style of wrestling game, with unrealistic moves like WWF Wrestlemania: The Arcade Game. Here’s a press release:. ACTION ARCADE WRESTLING SMASHES ONTO NINTENDO SWITCH...
VIDEO GAMES・14 DAYS AGO
IGN

Assassin’s Creed: Ezio Collection for Nintendo Switch Is Up for Preorder

The Nintendo Switch firmware has been updated to version 13.2.1

The Nintendo Switch has been receiving quite a few firmware updates in the past 6 months, and it has been more than a month since the last update had been released. So, it was only a matter of time before the first official firmware update of the new year was going to be released for Nintendo’s console.
VIDEO GAMES・7 DAYS AGO
TechRadar

Ubisoft+ could be coming to Nintendo Switch and mobile – here's why

Ubisoft is looking to enhance its game streaming services – and might soon be bringing Ubisoft Plus other platforms – thanks to a new partnership with Gamestream. This collaboration will see Gamestream’s video game streaming tech help Ubisoft advance its efforts in the field – likely by upgrading its Ubisoft Plus subscription service – in particular improving “how players interact with in-game menus during streamed sessions.”
VIDEO GAMES・10 DAYS AGO
egmnow.com

Nintendo has confirmed the full list of new titles arriving on Nintendo Switch over the next seven days. This week sees the release of Windjammers 2. The long-awaited sequel to the NEOGEO title Windjammers features new and returning characters, brand-new mechanics, new stages, power moves, and more. Joining it are...
VIDEO GAMES・10 DAYS AGO
gamingbolt.com

Rare’s classic 3D platformer Banjo-Kazooie has a release date for Nintendo Switch Online + Expansion Pack and it’s quite soon – tomorrow, in fact. Subscribers will have a chance to enjoy the 1998 Nintendo 64 platformer in all of its glory. To see how it looks, check out the newest trailer below.
VIDEO GAMES・8 DAYS AGO
pockettactics.com

Indie hit Terraria has been a huge success on a load of platforms, from the PC experience to iOS and Android, and it works well in all of its forms. One particular favourite is the Switch version, which has been a great success. If you’ve not had the chance to try it out yet, then we’ve got some great news for you, as you’ll soon get the chance with a Terraria free trial.
VIDEO GAMES・8 DAYS AGO
Destructoid

Techland is aiming for within six months of the original launch date. Dying Light 2 Stay Human‘s launch is just around the corner, but one of its platform versions won’t be making the date. The Nintendo Switch version of Dying Light 2, which would use cloud streaming technology, will not launch on Feb. 4, 2022 with the other platforms.
VIDEO GAMES・7 DAYS AGO
Game Informer Online

The Legend Of Zelda: Majora’s Mask Coming To Nintendo Switch Online Next Month