The Hill is a top US political website, read by the White House and more lawmakers than any other site -- vital for policy, politics and election campaigns.

Have we forgotten what motivates Putin’s Russia?

By W. Robert Pearson, Opinion Contributor
The Hill
22 days ago 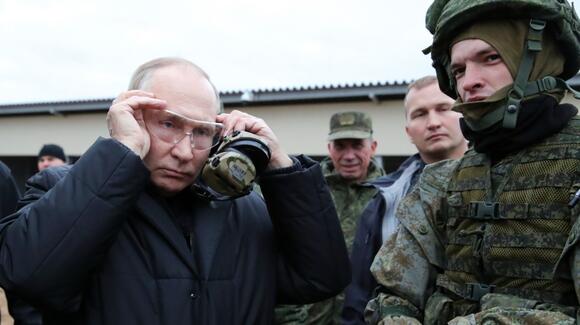 Pundits in Washington and around the country are suddenly pushing for a settlement to the Russia-Ukraine war. There will be a settlement one day; the issue is what the terms will be. Western leaders heretofore have understood that a settlement also must enhance the security of Ukraine and the rest of Europe. Pursuit of a negotiated end to the war will need to codify the reality that Russia’s ambitions against Ukraine and in the region are checkmated.

Various reasons for negotiations at this point are being put forward. First and foremost is the fear that Russia will use a nuclear weapon and draw the United States into World War III. Second is the view that the war will be a never-ending stalemate. With no good end in sight, say these commentators, why not end the war now and accept today’s realities? Third is an implied promotion of the notion that a return to an allegedly more stable world order is to be preferred, even if that ends up rewarding naked aggression. This view puts the balance of power doctrine above international law.

Did the pundits forget what Joseph Stalin did after the Yalta Agreement of February 1945, an agreement that the Europeans threw in the faces of the U.S. and the UK for 50 years after Stalin openly broke his promise to allow democratic elections in eastern Europe? Russia invaded Georgia in 2008 across an internationally recognized border. Have the pundits forgotten that after Russia signed the ceasefire agreement, Moscow recognized Abkhazia and South Ossetia as independent countries and occupied both areas in violation of the agreement? Has it been forgotten that Russia promised to recognize the independence of the whole of Ukraine, including Crimea, when Ukraine gave up its nuclear arsenal in 1994? Have they forgotten that after the United States made clear in 2013 that it would not intervene in Syria, Russian forces arrived in 2015 and aided in the slaughter of thousands, deliberately bombed hospitals and deliberately created a Syrian refugee crisis?

Isn’t that what Russia is doing today to Ukraine?

The object before us — and these forgetful pundits — is the current Russia-Ukraine war, but the stakes are Europe’s future and, with it, the future world order. The promise of the democratic West when the USSR collapsed in 1991 was to make it possible for all the new states, including those in eastern Europe and the former republics of the USSR, including Russia, to freely choose the direction of their futures.

Russia’s current history, and the history of the USSR, reveals a single overriding purpose: to dominate by subterfuge and force the fates of neighboring states, and by influence and threat the choices of the community of free democratic states. The International Court of Justice in March 2022 ordered an immediate halt to Russia’s invasion as a violation of the United Nations Charter and international law. Are the pundits prepared to reward Russia for its determination to use force rather than obey international law?

Pundits criticize Ukrainian President Volodymyr Zelensky for his tough requirements for talks with Russia. Are they looking for unilateral Ukrainian concessions to Russia? Have they found some reason to believe Moscow this time, as opposed to all the previous broken promises? If the pundits think that the U.S. abandonment of Afghanistan shook confidence in American steadfastness, then imagine what allowing Ukraine to submit to Russia’s bullying will do. No country on earth will have confidence that the United States will defend its interests — or its friends — when the going gets tough.

Some supporters of Donald Trump have called for cuts in support for Ukraine. Yevgeny Prigozhin, a close Putin ally, oligarch and founder of the private mercenary force Wagner Group, acknowledged on Nov. 7 that he interfered in American elections and intends to continue to do so. Did the pundits forget that former President Trump humiliated American intelligence agencies in Helsinki in July 2018 by siding with Putin on the question of interference? Have they forgotten Trump’s holding Ukrainian aid hostage in his attempted political extortion of Zelensky? Would any of these people ever do anything that would help Ukraine? Are the pundits now listening to those Republican voices?

Have they forgotten that the Russian invasion of Ukraine has never been popular at home, that many Russians did not want to be cut off from the West, that Putin had to call the invasion a “special military operation” to dampen resistance at home, or that thousands of Russian fled the country when additional troops were called up? Who has heeded Alexei Navalny’s warning to Time magazine that “time and again, the West falls into Putin’s elementary traps”?

The Ukrainians are winning battles in this war. With enough help, they plan to enjoy further successes. In 1776, Thomas Paine famously fingered the “summer soldier and sunshine patriots” ready to abandon the American independence struggle. He reminded Americans that “tyranny, like hell, is not easily conquered.” Now would not be the time to abandon our friends, described euphemistically by pundits as the United States “helping” Ukraine define its strategic goals. If Russia emerges from this conflict having faced down the West, the world is going to become ever more dangerous. And recall that China will be watching.

W. Robert Pearson is a fellow with the Duke University Center for International and Global Studies/Rethinking Diplomacy, former U.S. ambassador to Turkey (2000-2003), former director general of the Foreign Service, president of American Diplomacy Publishers Inc., and a scholar with the Middle East Institute.

Hear, Hear!Those who don't learn from History are doomed to repeat it (as has been shown SEVERAL TIMES dealing with Russia)

Putin Is Preparing to Flee When Russia Implodes, Ex-Aide Says

Russia’s Vladimir Putin and his cronies already have a plan in place to flee the country once things go sideways, a former aide to the Russian president has claimed. Abbas Gallyamov, a former speechwriter for Putin, made the astounding claim on Telegram early Wednesday, citing an unnamed source that he said had “insider” information on the whole affair.
17 HOURS AGO
grid.news

Putin’s propagandists have a new message about Ukraine: If we don’t win, we’ll all be tried for war crimes

Over the last two months, support for the Kremlin’s war on Ukraine has dropped dramatically among the Russian population — a roughly 20 percent drop, according to several polls, including one conducted for the Kremlin. And as that support drops, Russia’s leading propagandists are making a new case for continuing the war.
1 DAY AGO
The Hill

The Pentagon secretly modified advanced rocket systems it sent to Ukraine to make the weapons unable to fire into Russia and escalate the war. Since June, the U.S. has supplied Kyiv with 20 of the High Mobility Artillery Rocket Systems (HIMARS), but the weapons are uniquely modified so they can’t fire long-range missiles, The Wall Street Journal reported, citing U.S. officials.
WASHINGTON STATE・2 DAYS AGO
The Hill

Nearly half of Americans say Washington should push Ukraine to reach peace deal with Russia: poll

About half of Americans (47 percent) say that Ukraine should be pushed into a peace agreement with Russia as soon as possible, according to survey results released on Monday. An Ipsos poll conducted by The Chicago Council on Global Affairs found that the percentage of Americans who say the U.S. should urge Ukraine to settle,…
WASHINGTON STATE・1 DAY AGO
The Hill

In Ukraine, a new approach to modern conflict is emerging

Jill Biden privately told the French president that she and Joe Biden were ready for his re-election campaign: NYT

Joe Biden, who at 80 is the oldest US president in history, has not publicly announced whether he will seek reelection in 2024.
GEORGIA STATE・22 HOURS AGO
HuffPost

Trump failed to disclose the loan, which was paid off months after he took office, Forbes reported.
2 DAYS AGO
Salon

“I never said what I said”: Trump ripped for trying to deny his own call to “terminate” Constitution

Former President Donald Trump gets ready to speak during a Save America rally on October 1, 2022 in Warren, Michigan. (Emily Elconin/Getty Images) After former President Donald Trump took to his Truth Social platform to proclaim that the U.S. should "terminate" the Constitution, he followed up on Monday with a new rant denying that he had ever said any such thing — even though he did, publicly, for all to see.
MARYLAND STATE・1 DAY AGO
The Hill

Murkowski on Trump call to suspend Constitution: ‘An affront to our Republic’

Sen. Lisa Murkowski (R-Alaska) became the latest Republican to condemn former President Trump’s call to terminate the Constitution over his unfounded claims of mass electoral fraud in 2020. “Suggesting the termination of the Constitution is not only a betrayal of our Oath of Office, it’s an affront to our...
ALASKA STATE・2 DAYS AGO
Newsweek

In another 2023 surprise scenario, bitcoin could crash a further 70% to $5,000, according to Standard Chartered.
2 DAYS AGO
The Hill

Biden administration signs off on $425M in arms sales to Taiwan

The Biden administration has approved two separate arms sales to Taiwan worth more than $425 million as China has stepped up its threats and aggression toward the island.  The State Department said the sales are for spare aircraft parts to support Taiwan’s F-16 fighters, C-130 transport planes and other weapons systems that the United States…
17 HOURS AGO
The Hill

This and two earlier columns argued that the greatest dangers facing the presidents of China, Russia and the U.S. are domestic in character. That should surprise some readers, as the conventional view in America, confirmed by polls, is that the largest threats to this nation are China and Russia. Don’t count on that.
2 DAYS AGO
DOPE Quick Reads

Footage of what Ukrainian forces allege to be a K-51 grenade was recently shared via Telegram by the Naval Forces of the Armed Forces of Ukraine. The translated caption to their video revealed that,
2 DAYS AGO
The Hill

Throughout the 20th century, American leadership was paramount in pushing back against authoritarian and revisionist dictators who sought to undermine global peace and quash human rights. Both Democrats and Republicans alike recognized that the United States could ill afford to take a passive role on the world stage, as problems...
2 DAYS AGO
The Hill

Iran announces first execution of a prisoner arrested in protests

The execution comes as other detainees also face the possibility of the death penalty for their involvement in protests that began in September.
7 MINUTES AGO
The Hill

More than a hundred lawmakers sent a letter Tuesday asking President Biden for a national strategy to combat antisemitism and a “whole-of-government” approach to threats and violence against Jewish communities.  “As members of the House and Senate Bipartisan Task Forces for Combating Antisemitism, we write to urge you to ensure leaders working within your Administration…
1 DAY AGO
The Hill

Preventing US weapons from escaping Ukraine is a challenge

Since October 2022, the Biden administration has modified weapons systems to prevent those systems from hitting Russia and has released plans to stop weapons dispersion across Ukraine’s borders.  Yet the sheer number of arms transferred to Kyiv and challenges associated with war raise unique problem: it is impossible to stop loose weapons in Ukraine, despite Washington’s best efforts.  Various D.C. think…
WASHINGTON STATE・9 HOURS AGO
The Hill

Rail workers warn of exodus after Congress forces through deal

Railroad workers could leave the industry after Congress forced through a contract that does not provide them any paid sick days, an exodus that would ripple through an economy reliant on freight railroads to transport goods. The exit of thousands of train conductors and engineers would be felt by major corporations and U.S. consumers alike.…
IOWA STATE・1 DAY AGO

The Hill is a top US political website, read by the White House and more lawmakers than any other site -- vital for policy, politics and election campaigns.