Could a COVID booster change convince more in NC to get it? 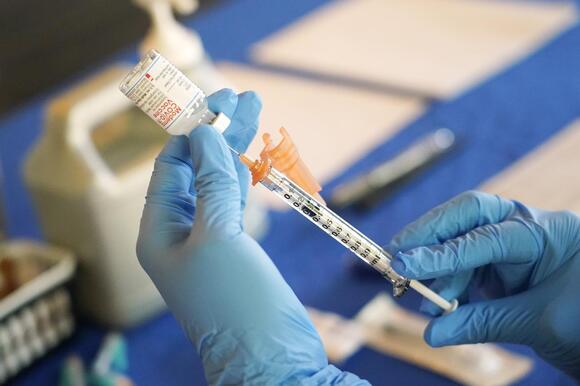 “The evidence right now is telling us that we should potentially update the vaccines because the virus is continuing to evolve,” said Dr. David Martinez, an immunologist at UNC Chapel Hill.

It’s why the Food and Drug Administration is re-considering its approach to COVID-19 booster shots. The agency is recommending a shift to an annual booster shot.

“The approach that the FDA is proposing is something that we already do for a virus that, again, continues to evolve from season to season like influenza. So, this is an approach that’s already tried and true,” Martinex said.

Dr. Nicholas Turner, an associate professor in the Duke Division of Infectious Diseases says it is more manageable than the six total shots some groups are approved for.

“I think it’s a recognition that the initial strategy that required a fairly large number of shots per individual is not a realistic thing to sustain over time,” said Turner.

In North Carolina, while 59 percent of vaccinated people have at least one booster shot — only 20 percent have received the most updated booster shot.

The FDA also proposes a new vaccine recipe be developed to match the next predicted dominant strain. Martinez says the match may not have to be completely spot on to be protective.

“That depends how we define protection. The current vaccines, even though they’re not closely matched to the circulating variants, are providing a high degree of protection against severe disease,” said Martinez. “I think if by protection we want to say potentially preventing infection, that’s a really high bar.”

An outside advisory group is tasked with voting on the formula and schedule change. On Thursday, they’ll vote whether the formula for the initial series and the booster should be the same.

“I think we’d all look forward to less shots, but we really don’t yet have that solid data to say that this is is absolutely going to be the ‘the’ final plan,” said Turner.

The advisory group faces big questions like who really needs a booster and how many strains it should target. Flu shots target up to four strains.

“I think one of the big goals in making this announcement well in advance of next year’s winter is to give a chance for that research to get done,” Turner said.

Hell no! You could give me a million dollars and I still wouldn’t take it!

What’s happening and where at NC/SC coast after Chinese spy balloon shot down?

RALEIGH, N.C. (WNCN) — After a U.S. fighter jet using a heat-seeking missile shot down a Chinese spy balloon on Saturday, what is happening off the coast near the North Carolina/South Carolina border? Before the downing of the balloon, we have since learned that a radar image about 13 miles off the coast of Myrtle […]
MYRTLE BEACH, SC・13 HOURS AGO
CBS 17

The Biden administration has said the balloon was not brought down sooner because of possible danger to people on the ground by falling debris.
TENNESSEE STATE・1 DAY AGO
CBS 17

17 of 19 horses euthanized as infectious anemia disease in NC spreads across 9 counties; Wake, Sampson among areas

Most of the active cases are associated with "unsanctioned horse racing," officials said in a news release Friday.
WAKE COUNTY, NC・2 DAYS AGO
CBS 17

A forecast map from shows the balloon heading over southern Indiana, Kentucky, and a corner of Tennessee before arriving over North Carolina airspace.
TENNESSEE STATE・2 DAYS AGO
CBS 17

Firefighters in North Carolina have new resources today to help them recognize their own risk of cancer in the profession.
RALEIGH, NC・3 DAYS AGO
CBS 17

If you look one way at North Carolina’s spending on education, it ranks 48th in the nation.
NORTH CAROLINA STATE・2 DAYS AGO
CBS 17

COVID-19 in NC: Key numbers keep falling for another week

After years of Danny and Tina searching for the help, they needed to restore their home.
NORTH CAROLINA STATE・1 DAY AGO
CBS 17

Someone in Wake County won $1 million in the latest Powerball drawing. Was it you?

RALEIGH, N.C. (WNCN) — Someone who bought a Powerball ticket in Wake County is now a millionaire. North Carolina Education Lottery officials said Thursday that a ticket sold in Garner for the drawing Wednesday night is worth $1 million. The ticket purchased at the Food Lion on state Route 50 matched all five white balls. […]
WAKE COUNTY, NC・3 DAYS AGO
CBS 17

The NCDMV is working under a 33% vacancy rate, the commissioner told CBS 17.
RALEIGH, NC・3 DAYS AGO
CBS 17

A Florida murder suspect who was considered "armed and dangerous" was captured in North Carolina after a police chase on Thursday.
WAUCHULA, FL・2 DAYS AGO
CBS 17

Cities across North Carolina are getting help to make roads safer for everyone. The United States Department of Transportation is giving more than $8 million to cut down on traffic deaths as part of the Safe Streets for All Grant Program.
RALEIGH, NC・4 DAYS AGO
CBS 17

The bill would make attacking an energy facility or communications facility involved in the transmission of broadband, telephone or cable a Class C felony.
MOORE COUNTY, NC・4 DAYS AGO
CBS 17

The agency broke away from the Department of Public Safety to focus on solving a long list of problems.
NORTH CAROLINA STATE・5 DAYS AGO
CBS 17

Of the more than 5,000 vacant teacher positions at the beginning of the 2021 to 2022 school year, the state's biggest challenge was filling positions for core classes in the K-5 schools.
4 DAYS AGO