By Julia Mueller
The Hill
3 days ago 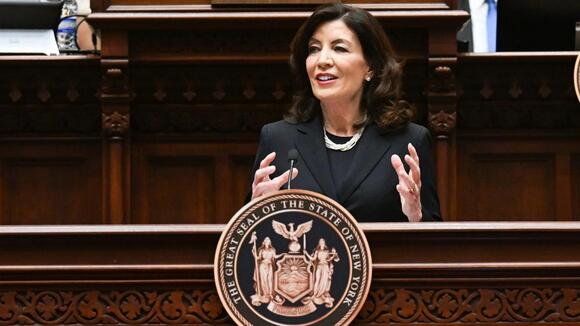 The New York legislature on Tuesday passed an amendment to the state constitution that would enshrine abortion rights and other protections in the wake of the U.S. Supreme Court’s decision to overturn the federal right to abortion in Roe v. Wade.

“As other states take extreme measures to stymie progress and roll back reproductive rights, New York will always lead the way to combat discrimination in all forms and protect abortion access,” Gov. Kathy Hochul (D) said in a statement on the passage.

It’s the second time the amendment has cleared the state Assembly and state Senate, and the matter now heads to voters in the state, to be on the ballot in 2024.

“Today, we passed the Equality Amendment for the second time, which, if approved by the people, would enshrine in our constitution expanded protections for the civil rights of New Yorkers and ensure that no one is denied the opportunity to fully participate in society on the basis of their identity,” Assembly Speaker Carl Heastie (D) said in remarks .

“Across this country, at all levels of government, we have seen a worrying trend in rolling back and limiting the rights of Americans. We will not allow that to stand in New York. I look forward to voting for the Equality Amendment once again when it goes before the voters in 2024,” Heastie added.

The Supreme Court’s decision last year in Dobbs v. Jackson Women’s Health Organization overturned Roe and handed the regulation of abortion over to the states, prompting some legislatures to tighten abortion restrictions and spurring others to shore up protections.

“Women’s rights and LGBTQI+ rights are under attack across the country, that is why it is essential that New York continues to lead the way in protecting reproductive health access and championing equality rights,” said state Senate Majority Leader Andrea Stewart-Cousins (D).

The amendment would add to the state constitution’s Equal Protection Clause and protect against discrimination based on a slate of factors, including national origin, sexual orientation — and reproductive health care and pregnancy outcomes.

GREAT!!! everyone needs to understand this.....YOU do not have the right to tell anyone ...how to manage and take care of their health....PERIOD!!!....so get over it.

Governor Hochul loves children so much that she wants to give them all a Free Abortion. What a wonderful thing to be so proud of and will be her legacy.

BANNING ABORTIONS DOESN'T STOP ABORTIONS! Abortion should always be legal and safe for every woman and girl!!!

Confronting the unfair limitations of civil rights in Puerto Rico

As Associate Justice Neil Gorsuch notes, "the Insular Cases have no foundation in the Constitution and rest instead on racial stereotypes. They deserve no place in our law.”
23 HOURS AGO
The Hill

Former Vice President Mike Pence on Friday said he takes “full responsibility” for classified documents ending up at his home in Indiana and pledged to cooperate with any investigation into how it happened. “During the closing days of administration, when materials were boxed and assembled, some of which were shipped to our personal residence, mistakes…
INDIANA STATE・20 HOURS AGO
The Hill

Trump heads to South Carolina amid growing headwinds in state

Former President Trump is facing intensifying political headwinds in South Carolina, a key early primary state that will play host over the weekend to one of the first high-profile stops of his 2024 White House campaign.  While he’s already racked up endorsements from prominent South Carolina Republicans like Gov. Henry McMaster and Sen. Lindsey Graham,…
SOUTH CAROLINA STATE・7 HOURS AGO
The Hill

A federal judge has temporarily blocked a California law intended to prevent doctors from spreading COVID-19 misinformation or disinformation to patients, finding that it is “unconstitutionally vague.”  A group of five doctors and two nonprofit advocacy groups sued in November after California Gov. Gavin Newsom (D) signed Assembly Bill 2098 into law the month before. …
CALIFORNIA STATE・1 DAY AGO
The Hill

Gallego: Arizona Republicans will call any Democrat ‘too liberal’

Is Nikki Haley setting a ‘man-trap’ for Trump, Pompeo and other 2024 rivals?

In a recent appearance on Fox News, Nikki Haley, the former South Carolina governor and former U.S. ambassador to the United Nations, listened while host Sean Hannity listed some of the potential Republican candidates she might have to run against if she decides to seek the White House in 2024. After he named former President…
SOUTH CAROLINA STATE・1 HOUR AGO
kfgo.com

ST. PAUL, Minn. – The Democratic-controlled Minnesota House passed a “clean energy” bill Thursday night to set a goal of 100% carbon-neutral energy from Minnesota utilities by 2040. Republican Chris Swedzinski warns families will be hit with an annual electric bill increase of $1,600 plus businesses will...
MINNESOTA STATE・1 DAY AGO
The Hill

Civil rights attorney Benjamin Crump said Wednesday that three Florida high school students are ready to file a lawsuit against Gov. Ron DeSantis (R) over his rejection of an Advanced Placement (AP) African American studies pilot program in the state.  “Will we let Governor DeSantis or anybody exterminate Black history in the classrooms across America?”…
FLORIDA STATE・2 DAYS AGO
The Associated Press

NEW YORK (AP) — New York’s attorney general warned the owner of Madison Square Garden and Radio City Music Hall on Wednesday that it may be violating anti-bias laws with its practice of barring lawyers from its venues if they work for firms suing the company. The attorney...
NEW YORK STATE・2 DAYS AGO
The Hill

Biden admin breaks down student debt relief numbers: California had the most applicants; Wyoming the fewest

The Biden administration released state-by-state data on Friday breaking down who applied for President Biden’s student debt relief program last year.  While the program that would give millions of Americans up to $20,000 in student debt relief is being challenged before the Supreme Court, the Biden administration broke down the data of those who seek…
CALIFORNIA STATE・1 DAY AGO
The Hill

Asian American and Pacific Islander community advocates called on politicians to reform gun laws following two mass shootings in AAPI communities in California.  Members of the AAPI Against Gun Violence steering committee held a press conference Wednesday to urge action and education on how gun violence in the U.S. affects Asian Americans. The committee held…
HALF MOON BAY, CA・2 DAYS AGO
The Hill

College Board will release an updated version of its Advanced Placement course in African American studies next week after Gov. Ron DeSantis’s (R-Fla.) administration rejected initial plans for a pilot program in Florida high schools.  Florida’s Department of Education blocked the course last week, arguing in a letter that the curriculum “is inexplicably contrary to Florida…
FLORIDA STATE・2 DAYS AGO
WCCO News Talk 830

North Dakota Governor Burgum sending a letter to Minnesota Governor Walz and several other state leaders urging them to amend the bills currently being considered that would mandate 100% carbon-free energy by 2040.
MINNESOTA STATE・2 DAYS AGO
The Hill

1st legal medical marijuana sales are made in Mississippi

JACKSON, Miss. (AP) — Patients have started buying medical marijuana in Mississippi, nearly a year after the products were legalized in the state. The Mississippi Medical Marijuana Association said in a news release Thursday that the first purchases happened Wednesday at The Cannabis Company in Brookhaven and at two dispensaries in Oxford — Hybrid Relief and Star Buds.
MISSISSIPPI STATE・2 DAYS AGO
The Hill

A North Carolina man who engaged in an hours-long standoff with police over a bomb threat near the U.S. Capitol in August 2021 pleaded guilty on Friday, according to reports. Floyd Roseberry, who has since said he was in the midst of a psychotic break caused by ineffective treatment for his bipolar disorder, pleaded guilty…
NORTH CAROLINA STATE・19 HOURS AGO
inlander.com

Washington state gears up for a national cannabis market

There's a reason you can't buy Oregon-grown cannabis in Spokane. It's called federal law. But with the growing possibility that the regulators and politicians in the nation's capital will end the federal prohibition of cannabis, Pacific Northwest lawmakers are gearing up to allow producers to export cannabis across state lines.
WASHINGTON STATE・2 DAYS AGO
The Whale 99.1 FM

The fact that a woman chooses motherhood is remarkable because those of us who are mothers will tell anyone that although it is the single most gratifying thing in life, being a mother is not for the faint of heart. Being a mother is the hardest job in the entire...
GLENVILLE, NY・2 DAYS AGO
CBS News

Springfield, Ill. — Illinois' two-week-old ban on semiautomatic weapons outlaws "ubiquitous" firearms in "radical" defiance of the Constitution's Second Amendment, a federal lawsuit filed by the National Rifle Association Tuesday claims.The powerful NRA joined a parade of gun-rights activists seeking to toss out the newly minted prohibition on dozens of rapid-fire pistols and long guns, as well as large-capacity magazines or attachments. Democratic Gov. J.B. Pritzker signed the law Jan. 10 in response to the shooting deaths of seven at the Fourth of July parade in the Chicago suburb of Highland Park, where 30 were also injured. He has...
ILLINOIS STATE・3 DAYS AGO
WBEN 930AM

“I expect this will be in her budget proposal,” said Albany insider Jack O’Donnell when asked about Governor Kathy Hochul’s plan to end the sale of fossil fuel-powered heating equipment. “We should see it by February 1, when the budget is due.”
ALBANY, NY・4 DAYS AGO