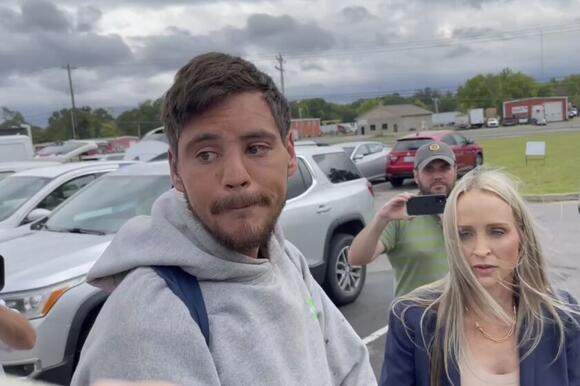 Two former Arkansas law enforcement officers are charged with civil rights violations in the violent arrest of a man outside a convenience store that was caught on video and widely shared on social media, the U.S. Justice Department announced Tuesday.

Former Crawford County sheriff's deputies Zack King and Levi White are charged with using excessive force by hitting Randal Worcester multiple times while he was on the ground during an Aug. 21 arrest. A bystander used a cellphone to record the arrest in the small town of Mulberry, about 140 miles (220 kilometers) northwest of Little Rock, near the border with Oklahoma.

The two former deputies pleaded not guilty during an initial court appearance Tuesday afternoon, after the indictment against them was unsealed. An attorney for the former deputies, Russell Woods, said his clients deny the allegations.

If convicted, each deputy faces up to 10 years in prison.

Charges were not announced against Mulberry police officer Thell Riddle, who was also on the video. Former Crawford County Sheriff Jimmy Damante fired King and White in October.

The current sheriff, Daniel Perry, declined to comment on the charges.

Damante has said Worcester, 27, of Goose Creek, South Carolina, was being questioned for threatening a clerk at a nearby convenience store and that he attacked one of deputies. The deputy suffered a concussion, Damante has said.

The three officers were suspended after the video came to light, and state and federal authorities launched investigations. The state's criminal investigation remains open and active, said Emily White, the state special prosecutor assigned to the case.

Worcester filed a federal lawsuit against the officers and local officials, saying they violated his constitutional rights during the arrest. Rachel Bussett, an attorney for Worcester, said she was pleased the two had been arrested.

“Now they’re just going to have to go through the court process," Bussett said.

White and King, who had been taken into custody by U.S. Marshals and the FBI, were released on bond Tuesday. A judge set an April 3 trial date for the men.

Policing experts have said the video raises red flags about the officers’ actions , saying that blows to the head amount to a potentially deadly use of force that’s justified only when someone poses a current and serious threat.

Worcester was treated at a hospital then jailed on charges including second-degree battery and resisting arrest. He was released the following day on a $15,000 bond. Worcester’s lawsuit said he has permanent injuries and will need continued medical treatment.

when I was in school teachers told the kids that the police are our friends and that people don't need guns for self defense because we have the police to protect us 🤣🤣🤣🤣🤣🤣🤣. Nineteen kids in Uvalde TX found out the hard way that cops are crooks and cowards F12

And we taxpayers pay all the lawsuit settlements. They need to get their own insurance just like doctors for malpractice.

this isn't a isolated incident coming out of Arkansas. they have a massive history off corruption

Arkansas man arrested after body found buried in his backyard

ST. FRANCIS COUNTY, Ark. (TCD) -- A 31-year-old man was arrested after officials reportedly discovered a body buried in his backyard. According to St. Francis County Jail records, Jonathan Paulman was booked on charges of first-degree murder and abuse of a corpse. Lt. Travis Hill from the St. Francis County...
FORREST CITY, AR・21 DAYS AGO
Newsweek

Man Dismembered, Put in Barrel After Being Forced to Do Fentanyl—Police

Police have said a Las Vegas man forced another man to either overdose on fentanyl or be killed.
LAS VEGAS, NV・16 DAYS AGO
ABC13 Houston

Former HPD officer Gerald Goines was back in court Thursday as attorneys argued that the murder indictment against him should be quashed, and if not, they said they would like a change of venue.
HOUSTON, TX・8 DAYS AGO
Law & Crime

Shawn Denning, the top officer in Greensburg, Pennsylvania, used the app Wickr to run drug deals because he thought it was safe, prosecutors said.
GREENSBURG, PA・2 DAYS AGO
NewsOne

Tehran — An Iranian man has been jailed for more than eight years after decapitating his wife and displaying her head in public in a case that shocked the country, the judiciary said Wednesday. Mona Heidari, 17, was killed in February 2022 by her husband and brother-in-law in Ahvaz, the capital of the southwestern province of Khuzestan.
10 DAYS AGO
msn.com

Pictured: Inmate, 25, who had 'inappropriate fling with jail officer'

Slide 1 of 7: An inmate who allegedly had an inappropriate relationship with a prison officer also had a fling with a prison nurse who was jailed over their romance. Harri Pullen, 25, is accused of having relationships with health worker Elyse Hibbs and custody officer Ruth Shmylo (pictured), both also 25, while he was locked up at category B prison HMP Parc in Bridgend, UK. Hibbs was jailed for six months in October after she admitted having flirtatious phone calls with the 'manipulative' Pullen while he served his sentence. Shmylo is now facing trial charged with misconduct in public office over the alleged relationship. Pullen's identity was revealed during a hearing at Cardiff Crown Court today, where Shmylo will stand trial in September.
19 DAYS AGO
The Independent

Mother of Uvalde school shooter arrested and charged with assault

The mother of the young man who shot dead 21 students and adults at Robb Elementary School in Texas, has been arrested by police in Oklahoma. Police records show Oklahoma City police arrested Adriana Martinez Reyes, and took her into custody after she allegedly threatened to kill the man she was living with. According to the documents, during her arrest, Ms Reyes, 40, said she was the mother of “the one that killed all of the children in the Uvalde, Texas, shooting”.KBTX-TV said this was the second time in a week that police had been called to her house.On...
UVALDE, TX・21 DAYS AGO
The Independent

Disturbing surveillance footage captured the moment a suspect attempted to kidnap a female employee from a Lowe’s hardware store in Oklahoma. Police in the city of Bartlesville said the man grabbed her by the throat, and then attempted to force her into his SUV parked just outside the store entrance last Tuesday. The surveillance video shows the suspect pin the woman up against a sales display and then drag her away in a headlock as her feet skid across the floor. “Finally, she caught a co-worker’s attention,” Bartlesville police captain Andrew Ward told KTUL. “He was able to...
BARTLESVILLE, OK・4 DAYS AGO
Majestic News

The Cops Chased Her For Miles. When She Finally Pulled Over She Had A “Good” Excuse

Emily Jean Owings Sindt, 28, was arrested after she was stopped for speeding. The driver found herself facing down police officers after she was caught blasting along the roads of Enid, Oklahoma, early on Tuesday morning. Footage from the arrest reveals that Owings Sindt had a plan to get out of getting a ticket. She told the responding officer that it was her “f***ing birthday” and that she had “to go poop” before she sped away from the routine traffic stop and led Oklahoma cops on an exciting 70 miles per hour car chase.
ENID, OK・8 DAYS AGO
KRMG

NEW YORK — The Sebastian County jail in Arkansas is facing a lawsuit that accuses officials of letting a detainee die of starvation and neglect while in their care. According to the complaint, Larry Price Jr., 51, was found by guards lying in a pool of his own urine and contaminated water, unresponsive in August 2021 after having been detained for more than a year. His once 6-foot-2-inch, 185-pound frame emaciated down to 90 pounds, the lawsuit states.
SEBASTIAN COUNTY, AR・9 DAYS AGO
Los Angeles Times

Prosecutors sought 33 years to life, but Mongols biker who killed cop may be freed by March

David Martinez, who pleaded no contest to voluntary manslaughter charges, was sentenced to 10 years in prison after being behind bars for over eight years.
POMONA, CA・9 DAYS AGO
WSB Channel 2 Atlanta

Mother of 2 shot in the head by possible road rage driver on I-85, deputies say

A woman is recovering after being shot in the head during a possible road rage incident on Interstate 85. According to the Oconee County Sheriff’s Office in South Carolina, a woman was shot at around 5:30 p.m. Sunday as she, her husband, and two children were traveling on I-85 southbound near the Georgia state line.
GREENVILLE, SC・17 DAYS AGO
CBS San Francisco

A multi-year investigation into a prison-based drug trafficking organization ends with 69 people being convicted in both state and federal court. According to U.S Attorney Robert J. Troester, through an investigation of the Aryan Brotherhood, 62 guns and more than 300 pounds of meth were seized along with more than $400,000.
18 DAYS AGO
William

Raping of a 23-year-old Woman: The Security Camera Footage That Could Convict Dani Alves of Alleged Act

The Brazilian player has been detained in Sant Esteve Sesrovires jail since last Friday on remand without bail after being charged with raping a 23-year-old woman in a nightclub's restroom. And more information about what allegedly occurred between the complainant and soccer star, Dani Alves, in a nightclub bathroom in Barcelona, on the night of December 30, 2022, keeps coming to light.
4 DAYS AGO
People

A 35-year-old Macomb County woman has been charged with shooting and killing her ex-boyfriend during an argument last November in Bruce Township.
MACOMB COUNTY, MI・18 DAYS AGO
Fox News

Missouri girl breaks free from man who tried to snatch her from front lawn: Police

An 11-year-old girl broke free from a man who tried to kidnap her while she was playing outside her Ash Grove, Missouri home, according to the Greene County Sheriff's Office.
ASH GROVE, MO・13 DAYS AGO