Father-to-be Brendon Urie says goodbye to Panic! at the Disco: 'A hell of a journey' 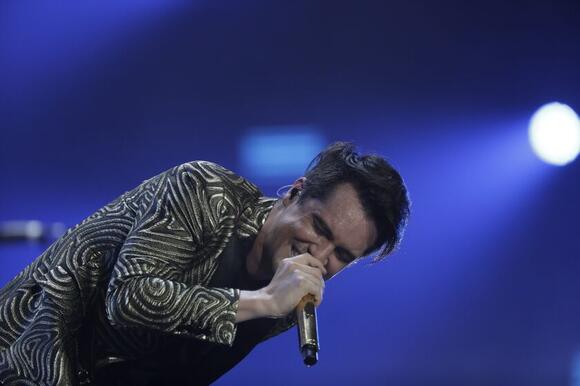 I write stories, and this one is a tragedy.

Longtime Panic! at the Disco frontman Brendon Urie announced Tuesday via Instagram that the pop-rock band will soon "be no more" after nearly two decades of music. The "I Write Sins Not Tragedies" singer also had some happy news to share: He and his wife of 10 years, Sarah Urie, are expecting their first child.

"Well, it’s been a hell of a journey," Urie said. "Growing up in Vegas I could’ve never imagined where this life would take me. So many places all over the world, and all the friends we’ve made along the way.

"But sometimes a journey must end for a new one to begin. We’ve been trying to keep it to ourselves, though some of you may have heard.. Sarah and I are expecting a baby very soon! The prospect of being a father and getting to watch my wife become a mother is both humbling and exciting. I look forward to this next adventure."

In order to devote his "focus and energy" to his growing family, the 35-year-old musician added that he intends to bring this chapter of his life to a close by disbanding Panic!

"I’ve sat here trying to come up with the perfect way to say this and I truly can’t put into words how much it has meant to us," he continued. "Whether you’ve been here since the beginning or are just finding us, it has been a pleasure to not only share the stage with so many talented people but also share our time with you."

Urie formed Panic! at the Disco in 2004 with childhood friends Ryan Ross on guitar, Brent Wilson on bass and Spencer Smith on drums. The group soon achieved mainstream success with its debut album, "A Fever You Can't Sweat Out," and mega-hit single "I Write Sins Not Tragedies."

Over the years, the original band members left Panic! at the Disco until only Urie remained. He has continued to perform under the moniker essentially as a solo act since 2015. Panic!'s other greatest hits include "Nine in the Afternoon," "Victorious," "High Hopes" and "Death of a Bachelor."

"I am looking forward to seeing everyone in Europe and the UK for one last run together," Urie said, plugging the band's final concert tour, which is scheduled to begin Feb. 20 in Vienna, Austria, and end March 10 in Manchester, United Kingdom.

"I love you. I appreciate you. Thank you for existing."

many years of happiness to you and your growing family!!!!💥❤💥

our lose ..have enjoyed all his music ..danced to and sing with him..enjoy your future

Madonna Lets Loose With Her Kids As Haters Beg Queen Of Pop To Cancel World Tour: 'It Would Be A Huge Flop'

Madonna and her children may have showcased their groovy moves in a recent social media video, but can the Queen of Pop bring the heat to her rumored 2023 world tour later this year?On Saturday, January 7, the "Material Girl" singer took to Instagram to share a sweet video compilation of her kids Rocco Ritchie 22, David Banda, 17, Mercy James, 16, and twins Estere and Stelle Ciccone, 10, dancing the night away with their mom during their trip to Africa."Dancing under the full moon with the Masai and good music 🐘🇰🇪♥️🇰🇪💚🦓," Madonna captioned the memorable moment, which occurred just...
18 DAYS AGO
Loudwire

Fans React to Brendon Urie Breaking Up Panic! at the Disco

Rock fans immediately started reacting after lead singer Brendon Urie announced the breakup of his longtime pop-rock band, Panic! at the Disco, in a statement he shared to social media on Tuesday (Jan. 24). In his message, the singer revealed that the group best known for their 2006 emo favorite...
4 DAYS AGO
Popculture

TJ de Blois, a founding member and drummer 2000s metal band A Life Once Lost, has died. De Blois' fellow former bandmate Vadim Taver confirmed in a Jan. 19 Instagram post that the drummer recently passed away at the age of 38. Taver did not specify exactly when de Blois passed away, and the musician's cause of death is not known at this time.
4 DAYS AGO
102.5 The Bone

Panic! at the Disco to disband; singer Brendon Urie will ‘focus on family’

Panic! at the Disco, a pop-rock band that has been together for 19 years, will disband after its upcoming European tour, the group announced on social media. Brendon Urie, the only musician left from the original group, announced the band’s decision in a post on the band’s Instagram page on Tuesday, The Washington Post reported.
2 DAYS AGO
Whiskey Riff

11 Country Music Artists Who Have Come Out As Gay

Here are some names the country community has rallied behind in recent years, as well as some good ol’ country music. Sam Williams, Son of Hank Williams Jr. Sam Williams, the son of Hank Williams Jr., sat down for Apple Music’s Proud Radio with Hunter Kelly, where he discussed the inspiration behind his “Titled Crown” music video, which details his upbringing, his relationship with his family, and ultimately serves as his public coming out.
15 DAYS AGO
Black Enterprise

Legendary soul singer Smokey Robinson is at a point in his life and career where he’s ready to tell it all, including his past affair with fellow Motown icon Diana Ross. Robinson sat down for a tell-all interview on VladTV where he opened up about his history with Ross which dates back to their upbringing in Detroit. The “Cruisin” singer first met Ross when he was 12 years old and lived four doors down from the future Supremes lead singer.
9 DAYS AGO
News Breaking LIVE

Legendary musician and singer Don Williams, one of the singing foursome, The Williams Brothers Quartet, has died, his family announced. Williams reportedly died of natural causes at his home, according to The Hollywood Reporter.
23 DAYS AGO
shefinds

Paulina Porizkova Strips Down To Her Birthday Suit On Instagram: 'Finally Comfortable In My Own Skin'

Paulina Porizkova just flaunted her toned and sculpted figure in her latest Instagram post along with a reflective and moving caption to ring in 2023. The supermodel and writer, 57, posed topless in her upload with a new photo for her 970K followers, while looking out a window beside her and wearing black underwear.
18 DAYS AGO
musictimes.com

GloRilla just received a marriage proposal from Shaquille O'Neal. The rising Memphis rapper has been busy in the past months as her popularity in the music industry continues. Starting with her "F.N.F (Let's Go)" release in April, GloRilla went on to release more songs and EP while establishing collaborations with other artists.
29 DAYS AGO
Showbiz Cheat Sheet

What Religion is Carrie Underwood? The Singer’s Faith Comes Through in Her Songs

Carrie Underwood is a famous country singer-songwriter, and her Christian faith inspires some of her most popular music.
7 DAYS AGO
News Breaking LIVE

Just days after several publications, including our own, reported that drummer and Modest Mouse founding member Jeremiah Green had been suffering from cancer, Green has died of the disease. He was 45.
25 DAYS AGO
Distractify

Who Is Phil Anselmo's Wife? The Pantera Frontman Has Been With Kate Richardson Since 2004

The fans have spoken, and it seems that American metal vocalist Phil Anselmo is highly revered as one of the greatest frontmen in metal history. The Lousiana-born rockstar has been a member of several different bands throughout his longtime music career which kicked off in the '80s. Today he is currently active in the bands Pantera and Down as frontman.
2 DAYS AGO
BGR.com

Fans of the Netflix mother-daughter drama Ginny & Georgia have been waiting for almost two years now to get a resolution to that Season 1 cliffhanger — but, come Thursday, the wait will finally be over. Season 2 of the series is set to debut on the streaming giant...
GEORGIA STATE・24 DAYS AGO
MyStateline.com WTVO WQRF

(WTVO) — The Blumhouse evil-doll horror film “M3GAN” got off to a killer start this weekend, debuting with $30.2 million in ticket sales, according to studio estimates. Universal Pictures’ “M3gan,” about a robot companion built for a young girl after her parents are killed in a car accident, rode strong buzz and viral dancing memes to an above-expectations debut. […]
CALIFORNIA STATE・17 DAYS AGO
News Breaking LIVE

Legendary guitarist and rock star Jeff Beck, who rocketed to fame as a member of The Yardbirds and later formed the Jeff Beck Group, has died, according to a statement released by his family.
14 DAYS AGO
Anita Durairaj

Leslie Howard Steiner (1893 - 1943) was an English actor, director, and producer who is best known for his role as Ashley Wilkes in the classic 1939 movie, Gone With the Wind. As a young adult even before he got into the movies, Leslie became interested in the war effort. During World War I, he voluntarily enlisted as a private in the British Army.
18 DAYS AGO
Popculture

A devastating fall likely left Hanif Kureishi with permanent scars. The My Beautiful Laundrette writer revealed on Jan. 6 how a moment of dizziness led to a near-death experience while in Rome on Dec. 26. In a tweet Friday, the 1986 Oscar nominee said he believed he had just "three breaths left." "I cannot scratch my nose, make a phone call, or feed myself," Kureishi said, adding that he has made "minor improvements" since his spine surgery. The acclaimed playwright, author, and screenwriter revealed in a candid Twitter thread that he became sick while watching another Premier League game between Liverpool and Aston Villa in the Italian capital: "I had just seen Mo Salah score against Aston Villa, sipped half a beer, when I began to feel dizzy. I lent forward and put my head between my legs; I woke up a few minutes later in a pool of blood, my neck in a grotesquely twisted position, my wife on her knees beside me."
19 DAYS AGO
Soap Hub

Jack Abbott and Diane Jenkins think they successfully framed Jeremy Stark — think again. It all went perfectly according to plan for Jack and Diane, but Y&R spoilers hint that there’s more to the story than neatly putting Jeremy Stark away for a crime he didn’t commit. However, we predict that it isn’t as simple as these two seem to believe.
7 DAYS AGO
Newsweek

Williams' curtsy to Queen Elizabeth II during a 2010 meeting has been compared to Meghan's Netflix docuseries claims that she thought the gesture was a "joke."
12 DAYS AGO
Tyla

This week saw the release of Prince Harry's memoir. The hotly-anticipated 'Spare' delves into the Duke of Sussex's childhood and the difficulties of growing up as part of the most famous family in the world. He also opens up about the battles he's had with his mental health and the...
16 DAYS AGO