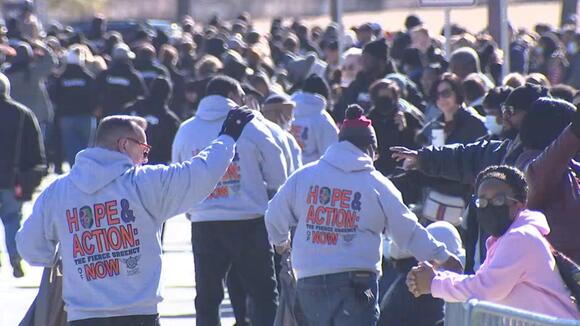 Thousands of people are expected to attend the parade, which will feature floats, music and marchers, according to the Dr. Martin Luther King Jr. Commemoration Society.

The parade will begin near N. Detroit Ave. & John Hope Franklin Blvd, will go through N. Greenwood Avenue and will end near ONEOK Field.

The parade will begin at 11 a.m. and is free to the public.

The theme of the parade is “We Are Stronger When Working Together,” according to the Society.

“If there’s one thing that Dr. King and Tulsa’s MLK Parade continues to remind us, it’s that the flame of hope is one that endures and we must work to keep the dream alive,” Pleas Thompson, president of the Martin Luther King, Jr. Commemoration Society, said in a press release.

“By coming together on this special day, we honor Dr. King’s message of peace, love and equality and recognize that we are always more powerful when working together. I can think of no better theme for our parade and look forward to seeing everybody there on January 16,” Thompson continued.

Dwain E. “Flip” Midget, the former Director of the Working in Neighborhoods Department and long-time public servant, was posthumously named the Grand Marshal of the parade, according to the Society.

Construction is expected to be completed in spring 2024
TULSA, OK・18 HOURS AGO
KRMG

A car went through the front of a south Tulsa Walgreens on Monday.
TULSA, OK・15 HOURS AGO
KRMG

Sinkhole on Riverside in midtown has been filled in

The sinkhole on Riverside is now filled in.
TULSA, OK・22 HOURS AGO
KRMG

Tulsa Fire Department (TFD) said that memories of a deadly fire which involved a child with disabilities prompted a firefighter to do a much as he could to prevent a future incident like that.
TULSA, OK・8 HOURS AGO
KRMG

The Tulsa Drillers are hosting a job fair on Tuesday.
TULSA, OK・15 MINUTES AGO
KRMG

The Oklahoma Department of Transportation (ODOT) said the U.S. Highway 169 southbound off-ramp to East 21st Street is closed due to an unstable and oversized load.
TULSA, OK・23 HOURS AGO
KRMG

Tulsa Police are on the scene of a shooting near E Apache and N Peoria.
TULSA, OK・14 HOURS AGO
KRMG

Bad weather can cause cracks and potholes to open up in the road.
TULSA, OK・9 HOURS AGO
KRMG

Mark your calendars! The dates for the 2023 Porter Peach Festival have been announced.
PORTER, OK・1 DAY AGO
KRMG

People can try a south Tulsa for free next weekend.
TULSA, OK・1 DAY AGO
KRMG

“The best part of the job for me I think is just leading my tribe, this organization into the future,” said Pearson.
OSAGE COUNTY, OK・8 HOURS AGO
KRMG

Tulsa Police are on the scene of a shooting near E Apache and N Peoria.
TULSA, OK・14 HOURS AGO
KRMG

Rush hour and school traffic are not expected to be impacted during the closure, the City of Broken Arrow said.
BROKEN ARROW, OK・1 DAY AGO
KRMG

Imagine heading to your neighborhood Starbucks on a Saturday morning to buy a 10-buck cup of joe, but then being charged a tip for over four thousand dollars. “We do give good tips but nothing like that," said Jesse O'Dell.
TULSA, OK・10 HOURS AGO
KRMG

A Ukrainian religious leader spoke at a downtown Tulsa church this weekend.
TULSA, OK・8 HOURS AGO