Long-term federal financing is critical for US dam rehabilitation

By Martin Doyle and John Ryan, opinion contributors
The Hill
28 days ago 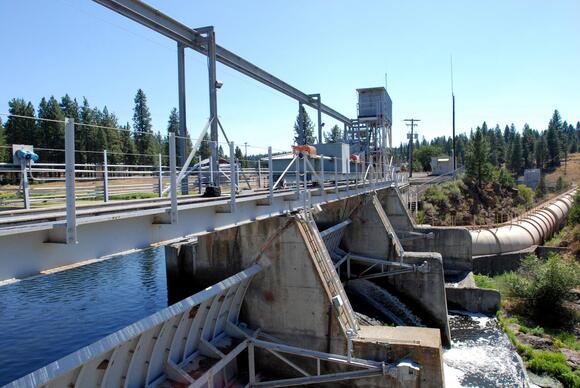 Dams are critical pieces of the nation’s infrastructure, supporting flood reduction, waterborne commerce, hydropower and water supply. But over 50 percent of our dams were built before 1970 and as they age, safety liabilities increase while their effectiveness decreases. Of the nearly 90,000 non-federal dams in the U.S., more than 15 percent are considered high hazard, and many — perhaps as high as 75 percent — no longer serve their originally intended purpose.

Rehabilitating dams is often straightforward from an engineering perspective but paying for it faces three challenges. First, it’s not cheap; more than $75 billion is needed nationwide, including $24 billion for high-hazard dams alone . Second, because 85 percent of U.S. dams are non-federal, rehabilitating dams will have to be paid for by non-federal sources. And third, while there are potential benefits to rehabilitating any infrastructure (e.g., improvements in efficiency or safety through modernizing decades-old engineering), when money is tight for a community, other basic infrastructure needs, like bridge repair or water system upgrades, will often take priority.

Fortunately, direct federal financing will soon become available for dam projects. This spring, the Corps Water Infrastructure Financing Program (CWIFP) will begin accepting applications. This new program, managed by the U.S. Army Corps of Engineers, will have the capacity to make about $7.5 billion of long-term loans, the bulk of which is specifically allocated to nonfederal dam improvement.

CWIFP loans will have features that help dam projects make the most out of a community’s available funding. For example, the loan’s interest rate will be fixed at the U.S. Treasury’s own cost of financing at the time of commitment. That rate is comparable or even lower than what is typical in the tax-exempt bond market. Also, the loan term is 35 years after project completion. This means an overall term of 40 to 45 years after project initiation is possible, significantly better than what could be done in the typical bond market where a 30-year clock would start ticking when the project was initiated.

Still, even the CWIFP is limited for the specific needs of dams, in part because the program was not actually designed for dams. CWIFP shares a statutory framework with the Environmental Protection Agency’s (EPA) highly successful Water Infrastructure Finance and Innovation Act (WIFIA) loan program , which was primarily intended for municipal public water system projects. Aspects of WIFIA law regarding loan features and federal budgeting perfectly adequate for municipal water systems will significantly constrain CWIFP’s capabilities for dam rehabilitation.

To reduce these statutory constraints, CWIFP stakeholders’ lawmakers in the House of Representatives introduced a bill last year, the Water Infrastructure Finance and Innovation Act Amendments of 2022 . Proposed amendments include a 55-year loan term, which better matches the duration of benefits a dam can provide, and a clarification of federal budgeting treatment of loans to non-federal borrowers for projects with some federal intersection. On the surface, the budget issue can appear arcane. But if not resolved, it may severely restrict the effectiveness of CWIFP for large dam projects, which often have a legacy of federal involvement in development and construction.

WIFIA amendments specifically dedicated to dam rehabilitation could go a bit further when the bill is re-introduced in the new Congress. A loan term of 75 years is now permitted for federal loans to very long-lived transportation projects under the Department of Transportation’s Transportation Infrastructure Finance and Innovation Act (TIFIA) credit program . The same maximum term should be available to equally long-lived dam projects. In addition, TIFIA and another federal infrastructure loan program are allowed to adjust a loan’s interest rate at execution to reflect what it would have been at the time of loan application. This feature is helpful for projects with a long development period, also a characteristic of large-scale dam projects. WIFIA’s statute currently does not include the feature, but it would be easy to add using the language in the other loan programs’ statutes.

Federal financing will be critical to facilitate funding for dam rehabilitation. The Corps’ new program is important in terms of both loan capacity and capability, but it’s only the first step. CWIFP’s successful implementation in 2023 will provide the basis for further development — and, perhaps more importantly, active support from the many stakeholders of our nation’s dams.

Martin Doyle is a professor at Duke University focused on water resources and infrastructure.

John Ryan is principal of InRecap, LLC, which is focused on financing basic public infrastructure.

Watchdog: US may have misspent $191B in pandemic unemployment benefits

The Department of Labor’s (DOL) internal watchdog is estimating that a minimum of $191 billion in pandemic unemployment benefits may have been misspent. DOL Inspector General Larry Turner said in testimony submitted Wednesday to the House Ways and Means Committee that “at least $191 billion in pandemic UI payments could have been improper payments, with…
4 HOURS AGO
The Hill

The White House released new wage growth figures Wednesday arguing that a sector of the economy crucial to the Federal Reserve’s fight against inflation is actually weaker than bank officials may believe. The new wage measure, often referred to “supercore” wages, pertains specifically to the services sector without housing, which includes labor-intensive businesses like restaurants…
4 HOURS AGO
CNN

As the new year got underway in China, hopes appeared to be running high that an easing of tensions with the United States could unfold in the months ahead.
1 DAY AGO
The Guardian

China's Foreign Ministry said the craft was a lost civilian balloon, the same explanation it gave for a suspected spy balloon that drifted over the US.
NORTH CAROLINA STATE・2 DAYS AGO
The Hill

Treasury Secretary Janet Yellen on Monday insisted that “every responsible member of Congress” must agree to raise the debt ceiling to avoid “catastrophe” after the U.S. reached its borrowing limit last month. “America has paid all of its bills on time since 1789, and not to do so would produce an economic and financial catastrophe,…
2 DAYS AGO
The Hill

Three officials of the Biden administration are serving in their positions unlawfully because they have exceeded the amount of time officials can use the “acting” title, the Government Accountability Office (GAO) determined on Wednesday. The positions — the acting controller at the Office of Management and Budget, the acting director of the Department of Justice’s…
1 HOUR AGO
The Hill

Americans remain pessimistic about the economy despite huge job growth and cooling inflation. A slew of recent polls reveal that Americans are still struggling with high costs and aren’t convinced that the U.S. can stave off a recession as the Federal Reserve takes steps to slow the economy down.  That presents a challenge for President…
1 DAY AGO
The Hill

Legislation that would eliminate a requirement that most foreign travelers arriving in the U.S. be vaccinated against COVID-19 passed the House Wednesday. Under the requirement imposed by the Centers for Disease Control and Prevention (CDC), all adult visitors who are not citizens or permanent residents of the U.S. are required to show proof of COVID…
1 HOUR AGO
The Hill

Rep. James Clyburn (D-S.C.) said he believes President Biden’s State of the Union address on Tuesday was the start of his 2024 reelection bid.  Clyburn, the House assistant Democratic leader and former House Democratic whip, said in an interview on “CNN This Morning” that he thought the speech was the “best effort” he has seen from…
9 HOURS AGO
The Hill

Rep. Marjorie Taylor Greene (R-Ga.) on Monday called for a probe into why former President Trump was apparently not informed of previous Chinese surveillance balloons that Biden officials are saying crossed over the U.S. at least three times during the previous administration. “If it’s true the Pentagon purposely did NOT tell President Trump of Chinese…
2 DAYS AGO
The Hill

Emissions of a colorless, carcinogenic gas produced by facilities that sterilize medical equipment disproportionately affect low-income and minority neighborhoods but pose a risk to more than 14 million Americans, according to a report released Tuesday by the Union of Concerned Scientists. Ethylene oxide is largely produced by commercial sterilizers, which tend to be located in…
CALIFORNIA STATE・2 HOURS AGO
The Hill

A Navy admiral and former head of U.S. Pacific Command on Tuesday said it was concerning that the Defense Department was unable to detect at least four previous Chinese spy balloons that flew over the U.S. in recent years. Speaking at a House Armed Services Committee hearing, retired Adm. Harry Harris Jr. told congressional lawmakers…
MONTANA STATE・1 DAY AGO
The Hill

State of the Union shouting: What lawmakers yelled out

As President Biden delivered his second State of the Union address on Tuesday night, a number of lawmakers made their thoughts known with shouts and heckles.  Speaker Kevin McCarthy (R-Calif.), after warning his members to not interrupt the president, visibly tried to quiet Republicans who yelled out in the middle of the address. ‘Close the…
19 HOURS AGO
The Hill

For the U.S. business community, there is no doubt that Brazil is an opportunity not to be lost. A global economic slowdown and geopolitical tensions are changing how and where people around the globe get their food, energy, and other necessities, and Brazil and the U.S. are well positioned to work together to make an…
WASHINGTON STATE・3 HOURS AGO
The Hill

A federal clean fuel standard could further build on top of state efforts to usher in a new era of clean, affordable mobility options.
OREGON STATE・1 HOUR AGO
The Hill

National security adviser Jake Sullivan on Monday said the White House is “profoundly concerned” by reports from Turkey and Syria, where a massive earthquake has killed more than 2,300 people. “The United States is profoundly concerned by the reports of today’s destructive earthquake in Turkiye and Syria. We stand ready to provide any and all…
SYRIA, VA・2 DAYS AGO
The Hill

The Carter Center called on governments that have active sanctions against Syria and key actors in the region to ensure that necessary aid can be delivered unhindered to the Middle Eastern country as it continues to recover from Monday’s devastating earthquake.  “The Carter Center is deeply saddened by the earthquake that devastated Turkey and Syria,…
3 HOURS AGO
The Hill

More people are living to be 100: Here’s why

Story at a glance The average lifespan in the United States has taken a hit in recent years in part due to the COVID-19 pandemic and the opioid crisis. But the nation’s population is growing older with more people living to 100 than in decades past.   There were 89,739 centenarians living in the United…
1 DAY AGO
The Hill

Former President George W. Bush is set to return to Washington, D.C. later this month in a rare appearance to mark the 20th anniversary of the President’s Emergency Plan for AIDS Relief (PEPFAR). Bush will be joined by his former Secretary of State Condoleezza Rice and the former president of Tanzania Jakaya Mrisho Kikwete on…
WASHINGTON, DC・2 HOURS AGO