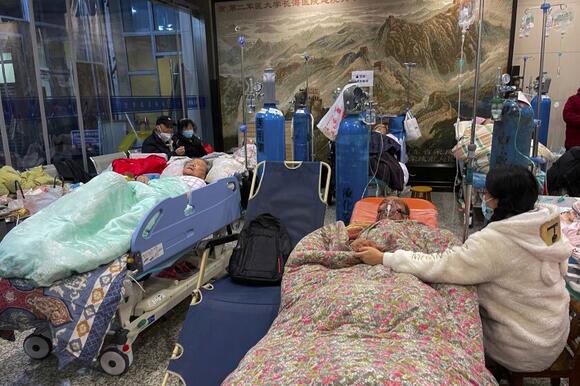 As COVID-19 rips through China , other countries and the World Health Organization are calling on its government to share more comprehensive data on the outbreak. Some even say many of the numbers it's reporting are meaningless.

Without basic data like the number of deaths, infections and severe cases, governments elsewhere have instituted virus testing requirements for travelers from China. Beijing has said the measures aren't science-based and threatened countermeasures .

Of greatest concern is whether new coronavirus variants will emerge from the mass infection unfolding in China and spread to other countries. The Delta and Omicron variants developed in places that also had large outbreaks, which provide more opportunity for new variants to crop up.

Here's a look at what's going on with China's COVID-19 data:

What is China sharing and not sharing?

Chinese health authorities publish a daily count of new cases, severe cases and deaths, but those numbers include only officially confirmed cases and use a very narrow definition of COVID-related deaths.

China is most certainly doing its own sampling studies but just not sharing them, said Ray Yip, who founded the U.S. Centers for Disease Control office in China.

For instance, the nationwide tally for one day last week was 9,548 new cases and five deaths, but some local governments released much higher estimates just for their jurisdictions. Zhejiang, a province on the east coast, said last week that it was seeing about 1 million new cases a day.

If a variant emerges in an outbreak, it's found through genetic sequencing of the virus .

Since the pandemic started, China has shared 4,144 sequences with GISAID, a global platform for coronavirus data. That's only 0.04% of its reported number of cases — a rate more than 100 times less than the United States and nearly four times less than neighboring Mongolia.

What is known and what can be figured out?

So far, no new variants have shown up in the sequences shared by China. The versions fueling infections in China “closely resemble” those that have been seen in other parts of the world since July, GISAID said. Dr. Gagandeep Kang , who studies viruses at the Christian Medical College of Vellore in India, agreed, saying there wasn’t anything particularly worrisome in the data so far.

That hasn't stopped at least 10 countries — including the United States , Canada, Japan, South Korea, India, Australia, Britain, France, Spain and Italy — from announcing virus testing requirements for travelers from China. The European Union strongly encouraged all its member states to do so as well.

Health officials have defended the testing as a surveillance measure that helps fill an information gap from China. This means countries can get a read on any changes in the virus through testing, even if they don’t have complete data from China.

“We don’t need China to study that, all we have to do is to test all the people coming out of China,” said Yip, the former public health official.

Canada and Belgium said they will look for viral particles in wastewater on planes arriving from China.

“It is like an early warning system for authorities to anticipate whether there’s a surge of infections coming in,” said Dr. Khoo Yoong Khean, a scientific officer at the Duke-NUS Centre for Outbreak Preparedness in Singapore.

Chinese officials have repeatedly said they are sharing information, pointing to the sequences given to GISAID and meetings with the WHO.

But WHO officials have repeatedly asked for more — not just on genetic sequencing but also on hospitalizations, ICU admissions and deaths. WHO Director-General Tedros Adhanom Ghebreyesus expressed concern about the risk to life in China.

“Data remains essential for WHO to carry out regular, rapid and robust risk assessments of the global situation,” the head of the U.N. health agency said.

The Chinese government often holds information from its own public, particularly anything that reflects negatively on the ruling Communist Party. State media have shied away from the dire reports of a spike in cremations and people racing from hospital to hospital to try to get treatment as the health system reaches capacity. Government officials have accused foreign media of hyping the situation.

Khoo, noting that South Africa’s early warning about Omicron led to bans on travelers from the country, said there is a need to foster an environment where countries can share data without fear of repercussions.

Several China experts predicted what Beijing's next move would be after their spy balloon that flew across America over several days was blown up by the U.S. military on Saturday.
TEXAS STATE・1 DAY AGO
Deseret News

The U.S. on Saturday downed a suspected Chinese spy balloon off the Carolina coast after it traversed sensitive military sites across North America and became the latest flashpoint in tensions between Washington and Beijing.
KANSAS STATE・2 DAYS AGO
Los Angeles Times

The European Union is launching its ban on imports of Russian diesel fuel, slashing energy dependency on Moscow.
18 HOURS AGO
TheWrap

Marco Rubio’s “Biden doesn’t know what he’s doing” balloon of hot air got popped Sunday when “This Week” host Jonathan Karl told him that former President Donald Trump let a Chinese spy balloon fly over the U.S. three times during his administration and did nothing.
FLORIDA STATE・16 HOURS AGO
Philosophy Blogger

Joe Biden's daring attempt to end the war in Ukraine: He offered Putin a whopping 20% stake

William Burns, President Biden's top intelligence advisor, travelled from the U.S. to Moscow earlier this month to bring resolution and peace. According to high-ranking bipartisan officials speaking with the Swiss-German newspaper Neue Burcher Zeitun (NZZ), the proposal officially surrendered 20% of Ukraine's territory for a lasting agreement between Russia and Ukraine.
1 DAY AGO
Business Insider

"Hard power is a reality," US Army Gen. Christopher Cavoli said in January. "If the other guy shows up with a tank, you better have a tank."
13 HOURS AGO
Business Insider

The stealth F-22, the top US air superiority fighter, just got its first known air-to-air kill taking out a Chinese balloon.

F-15 Eagles "supported the F-22, as did tankers from multiple states," the Defense Department said in a press release detailing the mission.
SOUTH CAROLINA STATE・21 HOURS AGO
DC News Now

Nicknamed Hunter, he told Rest of World that working at the Foxconn factory in Zhengzhou, China felt like he was stripped of his "rights and dignity."
2 DAYS AGO
The US Sun

VLADIMIR Putin is planning to launch a new "revenge" offensive in Ukraine as Russia losses near 200,000, Western intelligence claims. According to new numbers, Vladimir Putin has seen some 200,000 soldiers wounded or killed in the Ukraine war, according to a report that cited US and Western officials. Citing US...
2 DAYS AGO
Los Angeles Times

Magnitude 7.8 earthquake kills more than 1,300 people in Turkey and Syria

The magnitude 7.8 earthquake struck about 20 miles from Gaziantep, a major city and provincial capital in southern Turkey, rattling the region.
10 HOURS AGO
Los Angeles Times

Israel's ultranationalist heritage minister has ordered officials to examine the legality of the U.S. government's historic repatriation of an artifact to the Palestinian Authority.
2 DAYS AGO
Los Angeles Times

The complicated — and dangerous — economics of Mexican fentanyl

A Times investigation found that some farmacias in Mexican tourist towns are selling prescription drugs laced with fentanyl and methamphetamine. The question is, why?
2 DAYS AGO
Los Angeles Times

While COVID raged, another deadly threat was on the rise in hospitals

More people have suffered severe sepsis in California hospitals in recent years — including a troubling surge in patients who got sepsis inside the hospital itself, state data show.
LOS ANGELES, CA・23 HOURS AGO
Los Angeles Times

Overwhelmed by thousands of Cubans seeking entry, the U.S. has approved a policy change that makes migrants request a permit online.
TEXAS STATE・14 HOURS AGO