Mille Lacs Messenger has been serving the Mille Lacs area since 1913. Published Wednesdays by APG of East Central Minnesota with 24/7 local coverage found online at millelacsmessenger.com 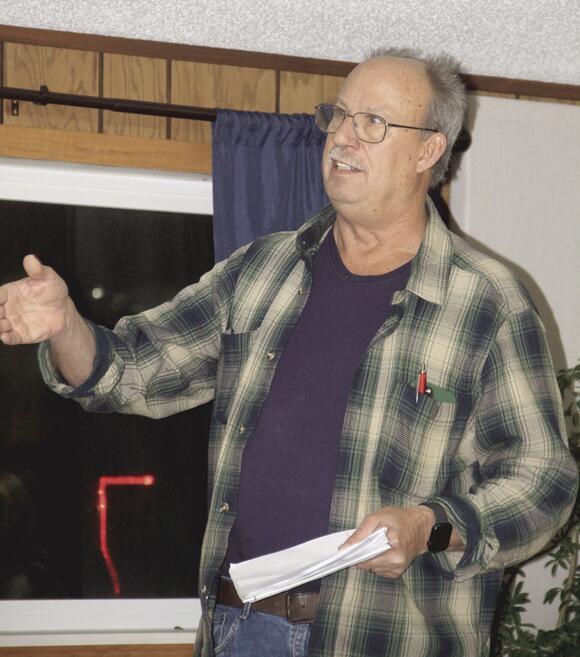 The Wahkon City Council gave their stamp of approval on several issues at their December meeting.

The council began the regular meeting with a public hearing concerning a request by citizen homeowners John Wilson and Linda Petersen for the vacation of some city property adjacent to land on the north side of Broadway Avenue.

The council heard from Wilson who said he went through most of the “hoops” with regard to acquiring this piece of land, including having the property surveyed at his own expense, getting those landowners around that property to sign off in agreement with the vacation request, running the request past city officials and is in the process of paying other fees that go with applying for this easement. He also assured the council that the property was legally far enough away from Native American burial grounds located in the area.

The 25 feet of property requested for vacating by the city was deemed not particularly usable for any other project in the city due in part to restrictions that accompany the proximity to the Indian burial grounds, so the council granted the request for the vacating of said property saying that it would be in the “public interest” to grant the easement and the request would go into effect in compliance with an official document that would legally cover seeding over of the land to the Wilsons.

In other action, the panel agreed to enter into a contract with Saehr Consulting to take the place of Sourcewell, a company the council had used in the past but whose contract is due to expire on Dec. 31, 2022. Mr. Saehr’s services were spelled out in a seven-page insert for the council to read and Saehr added that he had also signed on with both the city of Isle and Onamia as their consultant mostly with regard to zoning and boundary issues.

The council heard a presentation from City Clerk Karrie Roeschlein regarding the possibility of designating money from the city’s general fund and wastewater funds which were generating very small interest at present and investing some of that money into higher interest generating accounts. The council agreed to have Roeschlein look into some investment options for the money on hand in the city’s general and wastewater funds.

As for the ongoing saga of coming to a new contract agreement with Mille Lacs Island Resort with regard to the rates charged that resort for treatment of their wastewater, the council passed a motion to approve the final agreement.

alycia.vanrheenen@apgecm.com Isle City Council officially swore in members for the new term at their meeting on Tuesday, Jan. 10. The makeup of the council remained the same, including appointed member Don Dahlen; Councilmembers Ginger Houle, Monica Keding and Dahlen, along with Mayor Ernie Frie took the oath of office once more. Both Monica and Dave Keding remotely tuned into the council meeting from a public space while out of town...
ISLE, MN・5 DAYS AGO
Mille Lacs Messenger

bob.statz@apgecm.com The January meeting of the Wahkon City Council was held with a complete quorum of four councilmembers and the mayor, Ronda Bjornson, with two councilmen taking part via “interactive technology” pursuant to and in accordance with Minn. Stat. 13D.02. The locations of Councilman Tony Button was Lake Placid, Florida and Rick Roberts was Gulf Shores, Alabama. The present council stayed the same following last November’s election. The other two councilmembers are Chip Frederickson and Brenda Buck. ...
WAHKON, MN・5 DAYS AGO
Mille Lacs Messenger

The Isle Area Lions recently donated $25,000 toward an ongoing project for a new playground at Nyquist Elementary School in Isle. You can read more about the project in the article - “Building for the future.”
ISLE, MN・5 DAYS AGO
Mille Lacs Messenger

bob.statz@apgecm.com The January meeting of the Isle School Board began with the seating of the six board members including Jason Gallion as board chair, Nick Skogen as vice chair, Amanda Strecker as clerk, along with Kate Vanbuskirk, Bobby Cooper and new member Tracy Lilledahl. Overseeing the panel was District Superintendent Dean Kapsner. The bulk of the meeting centered around results of the annual district audit. Bergen-KDV presented the fiscal year...
ISLE, MN・5 DAYS AGO
Mille Lacs Messenger

Four people charged in association with stand off in Princeton

news.messenger@apgecm.com Four people are being charged after a gun was pointed at Mille Lacs County deputy on Saturday, Jan. 14. No one was injured during the incident at 2769 56th Ave. in Princeton Township, which resulted in a total of eight being held for questioning before four people were eventually transported to jail. The Mille...
PRINCETON, MN・1 DAY AGO
Mille Lacs Messenger

news.messenger@apgecm.com Recognized for its extensive conservation work and leadership efforts, Mille Lacs Soil & Water Conservation District received the 2022 SWCD of the Year Award for Minnesota in December. During its 86th annual meeting, the Minnesota Association of Soil and Water Conservation Districts (MASWCD) honored Mille Lacs SWCD with the award in Bloomington. The award recognizes and inspires leadership within the SWCDs to go above and beyond the base capacity. ...
MILLE LACS COUNTY, MN・6 DAYS AGO
Mille Lacs Messenger

Lakes and Pines will be offering the volunteer income tax assistance free tax preparation in four locations this year: Milaca, Mora, Moose Lake and North Branch. You may schedule your appointment by calling Lakes and Pines and 320-679-1800, option 4. Lakes and Pines has offered free tax preparation services for 16 years to seniors, families earning generally less than $60,000 per year, people with disabilities and persons for whom English is a second language. The IRS and the Minnesota Department of Revenue provide funding in part to administer the program, train volunteers and purchase equipment and supplies.
NORTH BRANCH, MN・5 DAYS AGO
Mille Lacs Messenger

alycia.vanrheenen@apgecm.com The East Central Regional Library Board is considering having naloxone on-hand at branch locations. At this point in time, the board is in the very early stages of considering the possible addition. Naloxone, or Narcan, is a drug that quickly reverses the effects of an opioid overdose. According to the National Institute on Drug Abuse, “Naloxone can quickly restore normal breathing to a person if their breathing has slowed...
MILLE LACS COUNTY, MN・6 DAYS AGO
Mille Lacs Messenger

District 10A, Rep. Ron Kresha, R Congratulations to the Little Falls FFA Fish and Wildlife team. Their performance last week has earned them a trip to the State Competition in April. The FFA does an incredible job of sharing the knowledge it takes to be successful in agriculture and preparing students for the future. I am very proud of our FFA teams and wish them the best in their future competitions. ...
MINNESOTA STATE・5 DAYS AGO
Mille Lacs Messenger

erik.jacobson@apgecm.com What difference a day makes. The day before the 33rd annual Brainerd Jaycees Ice Fishing Tournament, temperatures were in the low 20s, but by the morning of the tournament temperatures were below zero with a predicted high just cresting the zero mark. But that didn’t stop the people from coming out. According their Facebook page nearly 12,000 people showed up for the event and came from all over the...
BAXTER, MN・7 HOURS AGO
Mille Lacs Messenger

news.messenger@apgecm.com The Mille Lacs Raiders boys basketball team entered the third week of January still looking for their first win of the season. Three games later, after losing three more times, each to Great River Conference teams, Mille Lacs was left with an overall record of 0-13. The Raiders were blown out in the games against Pine City and Rush City, but lost a heartbreaker to Ogilvie in a game they had the lead throughout until the final seconds before losing by two points, 57-55. ...
PINE CITY, MN・2 DAYS AGO
Mille Lacs Messenger

Mille Lacs boys toughing it out

news.messenger@apgecm.com The Mille Lacs Raiders boys basketball team took the court this winter competing in their second year as a combined squad, featuring players from Isle and Onamia High Schools. In their inaugural campaign last year, the Raiders had a tough time finding wins, ending the season with an overall record of 2-24 and having no wins in the Great River Conference. ...
ONAMIA, MN・2 DAYS AGO
Mille Lacs Messenger

Strength in numbers for Raiders wrestlers

news.messenger@apgecm.com The saying “there is strength in numbers” often applies favorably to many endeavors. That maxim certainly is playing out well for the 2022-23 edition of the Mille Lacs Raiders wrestling program. The Raiders roster for this winter includes 50 young men and women grades 7-12, with 17 of those penciled in as potential varsity grapplers to fill the 14 weight categories. ...
MILLE LACS COUNTY, MN・2 DAYS AGO
Mille Lacs Messenger

news.messenger@apgecm.com The Mille Lacs Raider wrestling team had one of their busiest weeks in years, competing in nine matches over the course of five days. The Raiders wrestled tough and came out on top in seven of the nine bouts. On Jan. 17, Mille Lacs traveled to take on Section 7 opponent Staples-Motley. Staples got an early lead and racked up 10 wins on their way to a 50-21 victory....
MILLE LACS COUNTY, MN・2 DAYS AGO

Mille Lacs Messenger has been serving the Mille Lacs area since 1913. Published Wednesdays by APG of East Central Minnesota with 24/7 local coverage found online at millelacsmessenger.com