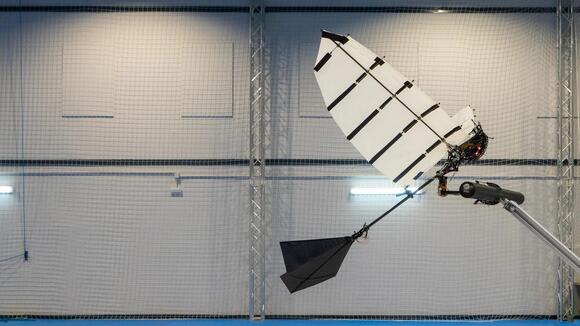 The robot only needs one claw to successfully stick its landing. Raphael Zufferey

It’s one thing to get a robot to fly like a bird , but it’s another thing entirely to get them to perch like one . There are a lot of factors to consider—including speed, timing, impact force, distance estimation, and balance, just to name a few. But judging from these recent photos and videos courtesy of Raphael Zufferey and their colleagues at the Swiss Federal Institute of Technology in Lausanne, a new bar has been set for ornithopters, aka bird-bots.

In an  interview with New Scientist , Zufferey explains that the trick to pulling off the stunning feat requires a few augmentations from actual avian behavior. Although the spring-loaded claw grasps a 6cm diameter branch much like its zoological inspirations, the final approach differs from its real-world counterparts. Generally, birds hover above their intended perch for a few moments before touching down. Zufferey’s invention, however, simply slows down as it nears its final destination using optical camera assessments, thus allowing the springed talons time to trigger within just 25 milliseconds, according to the team’s paper published with Nature Communications .

The new ornithopter isn’t quite ready for outdoor use.  It currently only operates while “dependent on accurate localization data from a motion capture system,” according to the team’s research paper, and isn’t optimized yet for unpredictable environments. Once those problems are solved, however, researchers think the robot could offer novel alternatives to gathering samples in hard-to-reach locations, or even monitoring noise-sensitive animals in the wild for research purposes. Assuming said animals don’t mind a nosy mechanical bird hovering around them, that is.

In any case, animals are providing inspiration for all manner of advancements in robotics: from six-legged spider rovers set to soon roam Japanese sewer systems to waterborne robots that can now mimic manta rays for faster, lighter, and more energy efficient designs. Birds aren’t the only flying creatures robots can imitate, either. Flying snakes —yes, you read correctly—capable of flattening and undulating their bodies to propel through the air have inspired creative new movements for future bot designs.

Articles may contain affiliate links which enable us to share in the revenue of any purchases made.

This heat-seeking robot looks and moves like a vine

Robots are increasingly drawing from a menagerie of animal inspirations, but one of the newer designs takes its novel inspiration from vegetation. As spotted on Tuesday by New Scientist, researchers at the University of California Santa Barbara have created a robot capable of mimicking vines and roots in their ability to locally detect and move towards sources of moisture. In this case, however, Charles Xiao and his cohort honed their creation to grow towards the direction of heat.
1 DAY AGO
Popular Science

Songbird species team up to ‘mob’ owls and other predators

The fossilized skull of Coccocephalus wildi, an early ray-finned fish that swam in an estuary 319 million years ago. The fish is facing to the right, with the jaws visible in the lower right portion of the fossil. Jeremy Marble/University of Michigan NewsBrains don't fossilize easily—so finding a preserved vertebrate cranium from this era is rare.
15 HOURS AGO
Popular Science

When humans and dolphins fish together, they both win

No one can predict exactly where birds go, but this mathematical model gets close

Just like when you get a whiff of stinky perfume instead of fresh air, sometimes sponges just need to sneeze something out. Deposit PhotosPlus other fun facts from The Weirdest Thing I Learned This Week.
1 DAY AGO
Popular Science

Where does Earth end and space begin? The Karman line is only one answer.

Layers of the atmosphere as seen aboard the ISS, which orbits above the Karman line. NASAIt's anything but simple to assign a value to the atmosphere's boundary.
11 HOURS AGO
Popular Science

Food waste is out of style—try this gadget instead

Stack CommerceConsider this single purchase for one amazing cause.
5 DAYS AGO
Popular Science

DARPA wants to push the boundaries of where satellites can fly

A rocket carries a satellite bound for low-Earth orbit launches in June, 2022. US Space Force / Joshua ContiHere's what we know about Project Daedalus.
2 DAYS AGO
Popular Science

Soil is more fragile than people may realize, which is why farmers must often improve its health. Deposit PhotosScientists designed the free-to-play game 'Dirty Matters' to help us appreciate this overlooked substance.
MASSACHUSETTS STATE・2 DAYS AGO
Popular Science

A third-year college student's AI could act as a valuable proofreader for SETI. Deposit PhotosThe program already spotted potential evidence while combing through 150TB of data from 820 nearby stars.
2 DAYS AGO
Popular Science

Letting your favorite things gather dust is unsustainable—use them

Attachment to limited-edition items, such as sneakers, can promote unsustainable consumption. Deposit photosA behavior called product attachment can explain why we avoid using what we care too much about.
13 HOURS AGO
Popular Science

Could artificial skin be the next frontier in electronics?. Shoeib Abolhassani / UnsplashIt can detect direct pressure as well as objects that are hovering close by.
6 DAYS AGO
Popular Science

These are the best deals from Beyerdynamic's Valentine's Day Sale. Brandt Ranj / BeyerdynamicGet your favorite music lover the earbuds and headphones they want with these deals.
2 DAYS AGO