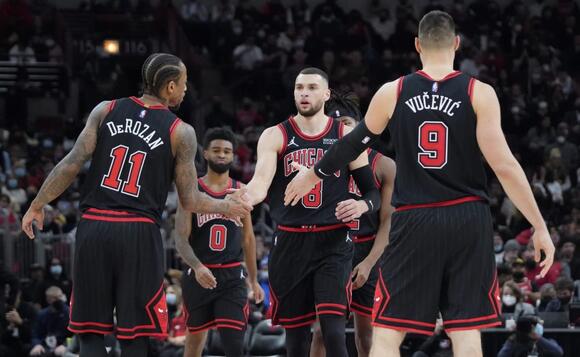 With Zach LaVine hitting his stride, the Chicago Bulls’ “Big Three” are poised to turn the team’s fortunes around this season.

The NBA is a star-driven league. This means the fate of NBA teams generally hinges on the performances of their star players. The Chicago Bulls are no different, as fans rely on their Big Three - Zach LaVine , DeMar DeRozan, and Nikola Vucevic - to carry the full load this season.

So far, Chicago has failed to live up to lofty expectations and stands in 12th place in the Eastern Conference with a 10-14 record. However, could the "Big Three's" stellar performance against the Washington Wizards earlier this week bode well for the team's future?

Big scoring night from the trio

For the first time this season, LaVine, DeRozan, and Vucevic scored at least 25 points each—Deebo led the way with 27 in the Bulls' 115-111 victory over the Wizards. DeRozan said their teammates had encouraged him, LaVine, and Vucevic to be more impactful, and against Washington, they delivered.

"That's been a conversation of late," DeRozan shared. "Our teammates have been encouraging us to do that; they've kind of been on us, just telling us it's on us three to carry this thing, and they're going to be behind us. Tonight we tried to be assertive and prove that point, and we played well."

Can the "Big Three" continue to shine?

The Bulls are a top-heavy squad. Beyond their high-scoring trio, the numbers significantly drop off, with Ayo Dosunmu being the next double-digit scorer with 10.2 points per game. Beyond that is a sea of role players and journeymen, who are all vital to the team's success but won't be expected to carry the load every night.

The Bulls will look to their Big Three - LaVine, DeRozan, and Vucevic - to continue this impressive level of play.

LaVine and DeRozan should be able to keep their scoring rate up, and Vucevic is a consistent double-double threat every night. The Bulls have already seen what their Big Three can do when they're firing on all cylinders, and if they can replicate this performance in the future, the Bulls could make their way up the Eastern Conference standings.

What is the Chicago Bulls' biggest issue that has to be addressed at the trade deadline?

The Chicago Bulls are in a precarious position as the NBA trade deadline approaches. Here's what they need to do to shore up their roster.
CHICAGO, IL・10 HOURS AGO
Bulls News

The Hornets beat the Bulls 111-96 in their last meeting on January 26.
CHICAGO, IL・3 HOURS AGO
Bulls News

With the trade deadline looming, which players on the Bulls are most likely to be traded?
CHICAGO, IL・2 DAYS AGO
Bulls News

Keys to the game and injury report: Chicago Bulls in desperate need of a win vs. Los Angeles Clippers

The Chicago Bulls are in a tough spot, but don't expect any big changes at the trade deadline, according to an insider.
CHICAGO, IL・11 HOURS AGO
Whiskey Riff

It’s the sound of hearts breaking across Philadelphia and the state of Pennsylvania… and let’s be honest, everywhere else in the country, too. Eagles quarterback Jalen Hurts made a very rare public appearance with his girlfriend Bryonna “Bry” Burrows after the NFC Championship game this past Sunday, which is a surprise to many fans, as he is extremely private about his life outside of football.
PHILADELPHIA, PA・2 DAYS AGO
OnlyHomers

Just days before the 2023 Super Bowl, one of the star players that is set to take the field for the game has been arrested on absolutely shocking charges. Offensive Lineman Josh Sills, who is in his rookie season for the Philadelphia Eagles, will be in court on February 16 in relation to claims that are so shocking and vile that we recommend you read for yourself here.
PHILADELPHIA, PA・22 HOURS AGO
Bulls News

Nikola Vucevic keeps focus despite persistent trade rumors: "If it happens, it happens. If not, it is what it is."

Chicago Bulls center Nikola Vucevic opens up about the trade rumors that have followed him all season long.
CHICAGO, IL・1 DAY AGO
Bulls News

The Bulls have had a rough year, and it seems they can't catch a break. Find out what went wrong in their latest game.
CHICAGO, IL・9 HOURS AGO
Bulls News

The Chicago Bulls are reportedly bewildered by the fact that Lonzo Ball is still experiencing pain in his left knee.
CHICAGO, IL・1 DAY AGO
Bulls News

"You put the work in, and it's bound to show" - Patrick Williams slowly living up to his potential

Patrick Williams has worked hard to live up to his potential and his recent stats back that up.
CHICAGO, IL・2 DAYS AGO