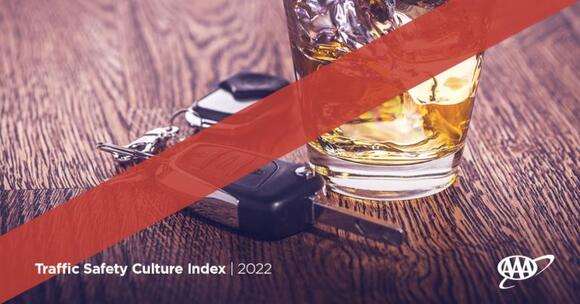 A new report from the AAA Foundation for Traffic Safety finds dangerous driving behaviors such as speeding, red-light running, drowsy driving, and driving impaired on cannabis or alcohol, rose from 2020 to 2021.

The most alarming increase was among drivers admitting to getting behind the wheel after drinking enough that they felt they were over the legal limit – an increase of nearly 24%.

This is a reversal in the steady declines in these dangerous driving behaviors in the three years from 2018 through 2020.

This survey is done every year by the AAA Foundation for Traffic Safety. For more than a decade, the annual Traffic Safety Culture Index (TSCI) looks at driver behaviors and attitudes.

“The reversal in the frequency of U.S. drivers engaging in risky driving behavior is disturbing,” said Dr. David Yang, Executive Director of the AAA Foundation for Traffic Safety. “We must be aware of the serious consequences of dangerous driving behaviors and change course.”

“This study shows a big disconnect between driver attitudes and behaviors. Drivers know behaviors such as speeding or driving impaired are dangerous and that their loved ones would disapprove. But many drivers still admit to engaging in risky behaviors in the past 30 days,” AAA Oregon/Idaho AAA public Affairs Director Marie Dodds said.

As in previous years, drivers reported too often engaging in risky behaviors that they know are dangerous and would meet with disapproval from friends or family. For example:

Since the start of the COVID-19 pandemic in 2020, traffic fatalities have risen. The National Highway Traffic Safety Administration (NHTSA) estimated that 42,915 people died in motor vehicle traffic crashes last year, a 10.5% increase from the 38,824 fatalities in 2020.

According to NHTSA, dangerous driving behaviors such as speeding, alcohol impairment, and non-use of seatbelts account for a considerable proportion of the increased fatalities. Accordingly, AAA urges drivers to keep everyone safe on the roads and avoid dangerous driving habits.

In Oregon, 599 people died in crashes in 2021, according to data from the Oregon Crash Analysis & Reporting Unit, compared to 507 people in 2020. This is an increase of 18% and the largest number since 2003 when 512 people lost their lives in crashes. Find more information at the ODOT Crash Statistics & Reports website.

Comply with speed limits. Drivers tend to overestimate the time saved by speeding. You’d have to travel 100 miles to save roughly 5 minutes, moving at 80 mph instead of 75 mph. Speed kills and isn’t worth the cost.

Out of sight, out of mind. Stow your smartphone away, turn it to airplane mode, or activate call/text blocking features such as Apple’s Do Not Disturb.

Only drive sober. If you consume marijuana, alcohol, or use potentially impairing prescription medications, then don’t drive. And if you’re going to drive, then don’t consume these substances.

Stay alert. Stop driving if you become sleepy because you could fall asleep at any time. Fatigue impacts reaction time, judgment, and vision, causing people who are very tired to behave in similar ways to those who are drunk.

Buckle up on every ride. A properly worn seatbelt is the most effective way to survive a traffic crash.

The annual TSCI identifies attitudes and behaviors related to traffic safety. The survey data are from a sample of more than 2,657 licensed drivers ages 16 or older who completed the online survey and reported driving in the 30 days before the survey.

Data from the 2021 TSCI were collected between July 26 and August 30, 2021, using a probability-based sampling panel representative of the U.S. population. The AAA Foundation issued its first TSCI in 2008, and the latest report is online at AAAFoundation.org

WALMART is allegedly under investigation due to recent questions about their dietary supplements. These inquiries specifically have to do with magnesium products. Attorneys for Top Class Actions believe that Walmart may be mislabeling the magnesium supplements that are under the retail chain's Equate brand, according to Best Life. Magnesium is...
3 DAYS AGO
CarBuzz.com

California is on a mission to ban a hazardous chemical that gives chrome its distinctive shine, a move that has angered those working in, and linked to, the car restoration and customization industries across the state. According to the board item summary from the California Air Resources Board (CARB), it...
CALIFORNIA STATE・20 HOURS AGO
The Tillamook Headlight Herald

High levels of lead have been found in two tubes of a skin cream known as Diep Bao that’s advertised as treatment for eczema in young children. State and local health officials are warning parents to avoid using the product while its safety is investigated. Two Portland-area children were recently found to have elevated blood lead levels. The children, one in Washington County and one in Multnomah County, are both...
WASHINGTON COUNTY, OR・2 DAYS AGO
The Tillamook Headlight Herald

The price you pay at the pump is slowly falling. The short days and winter weather of January are making people drive less, lowering gasoline demand, according to the weekly American Automobile Association (AAA) price survey. But the price of crude oil has climbed higher as fears of a global recession ease. This is putting upward pressure on pump prices. For the week, the Oregon average slips a penny to...
OREGON STATE・10 DAYS AGO