Harry and Meghan - as it happened: Duke of Sussex reveals he has internally ‘blocked out’ early memories of Diana

By Oliver O'Connell,Chelsea Ritschel and Maroosha Muzaffar
The Independent
2022-12-09 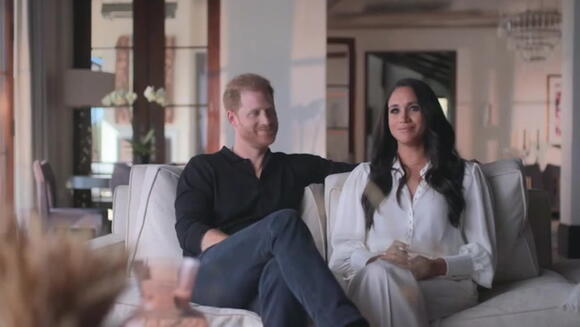 The Duke and Duchess of Sussex have received mixed reactions over their new Netflix documentary series, Harry and Meghan , which dropped on Thursday (8 December).

Parts of the much-hyped programme, which has been split into “Volume I” and “Volume II”, were described as “moving”, but the first three episodes did not deliver any new explosive allegations against the royal family - who will no doubt be relieved by the lack of revelations.

The Independent ’s Arts Editor Jessie Thompson wrote in her review of the series : “There are no major revelations here, nothing so incendiary that it will cancel King Charles’s coronation next year; in fact, certain quotes are becoming a bit pat.”

Meanwhile, the Sussexes’ staunchest critics wasted no time in excoriating the couple for some of the claims made in the show. Piers Morgan accused Harry and Meghan of trying to “brand Britain as a racist country” , while the BBC’s veteran royal correspondent Nicholas Witchell dismissed Meghan’s claims that the media wanted to “destroy” her as “absurd” .

Meanwhile, neither Palace officials nor members of the royal family were approached for comment over the content of Prince Harry and Meghan Markle ’s new Netflix docuseries, it has been alleged.

It was suggested that representatives for Buckingham Palace and Kensington Palace , as well as the royals themselves, were not offered the opportunity to reply to the accusations lodged by the couple during the first three episodes of their highly anticipated series.

The second part of Harry and Meghan’s docuseries will begin streaming on 15 December.

In a new interview with The Cut, by way of promoting her podcast Archetypes, Meghan Markle has shared more about the adjustments she and husband Prince Harry went through after leaving their roles as senior working royals. In particular, the Duchess of Sussex has spoken out about the challenges they faced when looking for a new home together, outside of the UK, saying that when they initially fell in love with the Montecito mansion they live in now, they weren’t sure they could afford it.
CALIFORNIA STATE・10 HOURS AGO
The Independent

Paul Burrell has shared that he has been diagnosed with prostate cancer, opening up about the “life-changing” news on ITV’s Lorraine this morning, 30 January.The former butler to Princess Diana became emotional as he recalled wrapping Christmas presents in December and wondering whether he would be able to do the same this year.“I was really lucky they caught it early,” Mr Burrell told Lorraine Kelly“I don’t think men are particularly good about going to the doctors - they need nudging.”Click here to sign up for our newsletters. Read More Paul Pelosi attack suspect makes chilling confession in call to TV stationUprooted London bollards reveal hidden wartime secret‘Robot dog’ can tackle sand dunes at three metres per second in tech first
2 DAYS AGO
The Independent

Paul Burrell, former footman to Queen Elizabeth II and ex-butler to Princess Diana, has claimed that he thinks Prince Harry has “lost the plot” with the release of his memoir Spare earlier this month.Burrell became a close confidante of Harry’s mother Diana, who once described him as her “rock”.Since Princess Diana died in a car crash in Paris in August 1997, Burrell has authored two books about his time working for her and appeared on reality TV shows such as I’m A Celebrity... Get Me Out of Here!The ex-butler, however, came under fire in 2008, during an inquest into...
2 DAYS AGO
The Independent

Princess Diana’s personal letters to friends, which were written while she was going through her divorce from now-King Charles III, are going up for auction.Lay’s Auctioneers, based in the UK, revealed in a statement that the letters will be sold “in individual lots” on 16 February. The company described the letters as “highly personal” and “astonishing,” and noted that they were written to two of the late Princess of Wales’ close friends, Susie and Tarek Kassem.Lay’s Auctioneers also said that, although the two women have “treasured these letters for over 25 years,” they do not want to pass them...
2 HOURS AGO
The Independent

The Princess of Wales has joked that her husband, the Prince of Wales, will not be adhering to a certain Valentine’s Day tradition this year.Kate Middleton was on a tour of Kirkgate Market in Leeds as she launched her early years campaign, when she said she didn’t think Prince William would be buying her any flowers for Valentine’s Day.While meeting stall holders at the market, she stopped at florist Neil Ashcroft’s business and admired his display of flowers.With the romantic day just a fortnight away, the seller asked Kate: “William will be buying you some roses?” and offered her...
16 HOURS AGO
The Independent

Sarah Jessica Parker has shared her candid perspective on ageing and why it means that she cannot be “the person” people expect her to be.The 57-year-old Sex and the City star opened up about her stance on ageing, and her physical appearance, during a recent interview withVogue France. According to Parker, while she doesn’t “feel any pressure” to look a certain way, she sometimes has the “impression” other people are the ones concerned about her appearance.“Like the fact that I have wrinkles or white hair. I think there are more interesting things to do with my time, don’t...
1 DAY AGO
The Independent

Julia Fox has revealed why keeping her New York City apartment has helped her son become more in touch with the “real world” despite her life in the spotlight.In a recent video on her TikTok, Fox responded to a troll who claimed that she was worth “30 million dollars”. The remark was a comment on the New York City apartment tour video she recently conducted on the platform in an effort to give “maximum transparency” to her fans about her not-so luxurious space.After noting in her clip that she didn’t “expect [her] apartment tour to go so viral,” she...
NEW YORK CITY, NY・1 DAY AGO
The Independent

Jeremy Vine has detailed the alleged moment Jeremy Clarkson recited a racist nursery rhyme on Top Gear.In a new Channel 5 documentary, the broadcaster explains how Clarkson’s on-screen character “specialises in giving offence” before recounting the row from 2014.“He did the nursery rhyme ‘Eeny, meeny, miny, moe’ and the really old rendering of that contains the N-word. He sort of mumbled to obscure the word but in one of the takes, he thinks the word wasn’t obscured and he thinks this take then emerged later,” Vine said.Click here to sign up for our newsletters.
2 DAYS AGO
The Independent

It’s been almost a year since Brooklyn Beckham and Nicola Peltz were married during a lavish Palm Beach wedding last April, but the drama surrounding the nuptials continues to unfold.Now, Nicola Peltz Beckham’s billionaire father – Nelson Peltz – is suing one of three sets of wedding planners who failed to meet the “scale” of his daughter’s high-profile guest list.New documents obtained by The Daily Mail show Peltz and Beckham went through three different wedding planners ahead of their big day – the second of whom Nelson Peltz is suing for refusing to refund him his $159,000 deposit.According to...
PALM BEACH, FL・9 HOURS AGO
The Independent

Ed Sheeran has officially returned to Instagram after being largely absent from social media for “the last couple of years”The “Shape of You” singer has shared few personal posts on Instagram in recent years, but ended his break on Tuesday (31 January) with a selfie video.In the video, which Sheeran captioned: “Back in the bitz,” he addressed fans directly and promised to be making more personal posts on the platform going forward.“Hi guys, so I realise I haven’t been that engaged in my social media or my fan base online over the last couple of years,” he said, before...
14 HOURS AGO
The Independent

Vanilla Ice has come forward with his reasoning for ending his brief relationship with Madonna.The “Ice Ice Baby” rapper – real name Rob Van Winkle – dated the pop singer for eight months in the 1990s.In 2021, Vanilla Ice claimed that Madonna “actually proposed” to him when they were together, but that he decided to say no as he was “too young”.While Madonna has yet to speak publicly on whether she proposed to the rapper, the music star doubled down on the claim in a new podcast interview, during which he also shared his alleged reason for ending the...
13 HOURS AGO
The Independent

A bride on Married At First Sight’s season 10 premiere was shocked after a guest at the ceremony revealed a secret about her new husband.Bronte Schofield, 29, tied the knot with Harrison Boon, 32 in Australia on Monday night’s episode (30 January).Minutes after the couple were married, guest Jessica Tomlinson told Schofield why she recognised the groom, revealing that he had dated her friend days before the ceremony.“No, no, you’re f*****g lying,” Schofield said.Click here to sign up for our newsletters. Read More Australia: Indigenous protesters rally for abolition of 'Invasion Day'Australia: Indigenous protesters rally for abolition of 'Invasion Day'Tourist shares moment he’s airlifted to hospital after snake bite in Australia
2 DAYS AGO
The Independent

A reality star has sparked a debate about plane etiquette after she applauded herself for staying seated after landing, until it was time for her row to exit.Batsheva Haart, who starred in My Unorthodox Life and who goes by the username @batshevahaart on TikTok, shared the video last month. In the clip, Haart could be seen sitting in a seat on a plane as she lip-sang the lyrics: “I’m so mature, I’m so mature,” from SZA’s “Kill Bill”.“Sitting in my seat instead of standing up until it’s my row’s turn to deplane,” Haart wrote in a text caption on...
2 DAYS AGO
The Independent

Fans react as Lily Allen and David Harbour show off their Brooklyn ‘clown house’ with $9,000 chandelier

David Harbour and Lily Allen have shown off their Brooklyn “clown house,” which has a $9,000 chandelier in it, prompting fans to praise their space.The couple gave a tour of their brownstone, located in Brooklyn’s Carroll Gardens neighbourhood, for a feature on the cover of Architectural Digest’s March issue. The pair hired designer Billy Cotton and architect Ben Bischoff to create the home, which has been decorated with Mylar wallpaper and crystal chandeliers.For the AD photoshoot, Allen and Harbour posed in their garden-themed living room, which featured multi-colored wallpaper and blue drapes on the walls. Some of the furniture...
BROOKLYN, NY・4 HOURS AGO
The Independent

A deaf woman who is to become a barista thanks to a social enterprise has said she is “excited to start”, and hopes to encourage customers to learn to sign.Gary Hopkins, 58, who hails from Cape Town, South Africa, founded social enterprise I Love Coffee, which recruits and trains deaf individuals to become baristas.It is part of a wider mission to break the barriers of communication between the deaf and the hearing through the power of ordering drinks.He said the venture – which began in South Africa seven years ago and is now putting down roots in London – was...
1 HOUR AGO
The Independent

Some of the BBC’s major radio stations, including Radio 3 and 4, saw audiences rally in the final quarter of 2022 – though listeners were down year-on-year for a second consecutive time, figures show.Radio 5 Live recorded a strong jump at the end of the year, a period that coincided with the World Cup in Qatar, with its average audience up 14% from 4.9 million in July-September to 5.6 million in October-December.But the station saw its listeners down 5% compared with October-December 2021 – the second quarterly year-on-year fall in a row.There was a similar picture at Radio 3 and...
1 HOUR AGO