Quiet is an Uneasy Feeling in the World of Arkansas Football 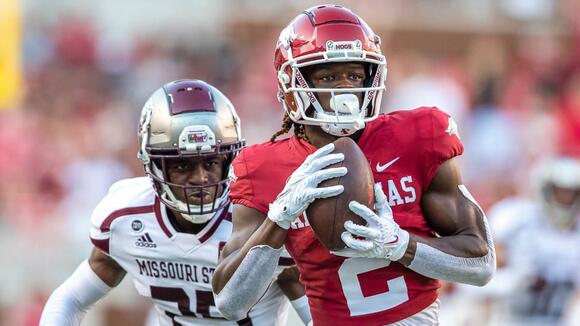 FAYETTEVILLE, Ark. – It's very quiet in Fayetteville on this Thursday night.

Normally, quiet this time of year comes with a feeling of peaceful holiday bliss. But not this one.

When it comes to the world of Arkansas football, it just feels eerily quiet.

Perhaps it's the extreme lack of interest by fans as far as Kansas is concerned. Every week of the season except one – Missouri week – a handful of people ask for insight into whomever the Razorbacks are set to play next.

This game just feels way off the radar if it was ever on the radar at all.

Much like when the Tigers roll onto the schedule each year to cap off the season the day after Thanksgiving, something just feels off when it comes to facing the Jayhawks.

But that can't be the cause of this feeling.

It could be the transfer portal. Sure, Arkansas has escaped relatively unscathed when it comes to impact players, but something feels off about that Ketron Jackson transfer.

Jackson had just begun to come into his own as a receiver and was staring down his biggest opportunity as a featured target in the Liberty Bowl against a non-SEC defense.

There's nothing in his stats line to suggest this could be NIL driven. However, if that were a consideration, a breakout bowl performance would have driven his value much higher heading into the spring transfer window.

It feels like the bigger picture is missing on this, but it still can't be the sole cause of this feeling.

It could be defensive coordinator Barry Odom's departure.

While it wasn't necessarily a surprise – it always felt like he was destined to depart around year three or four – there's just something about the way his name was quietly whispered around more jobs than one expects for a coach who is content in his employment and just hearing people out as opposed to actively looking to leave.

But that can't be the sole cause of this feeling either.

Collectively, they're cause for a moment's pause, but this feels more like watching someone walking through busy traffic with earbuds in while staring down at their phone.

It could just be 38 years of being conscious of Razorback football. It always feels like the next press conference about a coach dashing for Clemson or crashing a motorcycle, or another national championship level fumble is right around the corner.

The same life-long conditioning that keeps Razorback fans feeling like this could be the year nearly every season for the past 40 years in regard to baseball and basketball has deeply entrenched this endless cycle of "Why can't we just have nice things?" when it comes to football.

Even still, something about this quiet is uneasy. It's like Razorback fans are standing next to a thin sheet of ice with the weight of an ocean pressing in inches away.

For some reason this has the feeling of the cliche' calm before the storm.

Then again, it could just be Kansas.

STATUS OF TREVON BRAZILE UPDATED AND THE OUTLOOK ISN'T GOOD

Ice, Snow Can Keep Fans Away, But What Does It Mean for Arkansas, Texas A&M?

What does it take for Razorbacks, Aggies to play and what happens if they don't?
FAYETTEVILLE, AR・5 HOURS AGO
All Hogs

Razorbacks at Crossroads ... Just About Everywhere

Hogs Come Up Short on Road Again, Falling to Baylor

No. 17 Bears hold off late Razorbacks' rally as wins away harder to get.
FAYETTEVILLE, AR・2 DAYS AGO
All Hogs

One particular player stands to benefit greatly and that's a huge plus for the Razorbacks
FAYETTEVILLE, AR・2 DAYS AGO