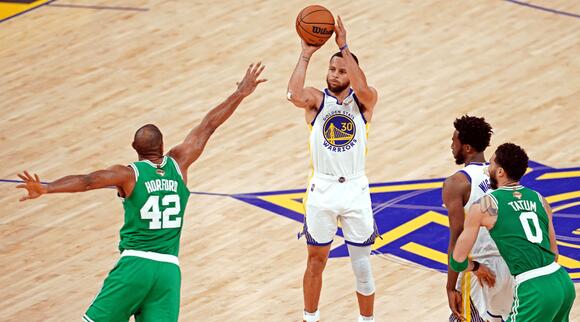 The four-time NBA champion becomes the fourth person to win the award on multiple occasions.

Stephen Curry is a man of many accolades.

Think back to Curry’s iconic ring gesture in the Warriors’ clash against the Celtics in Game 6 of the NBA Finals on June 16. After knocking down a deep three-pointer, the eight-time All-Star—instead of carrying out his signature shimmy or his classic “Night Night” gesture—pointed to his ring finger to proclaim he was primed for a fourth NBA title.

Not only did the shot give the Warriors a 22-point advantage, but his brilliance also foreshadowed Golden State closing out the series that night. The Baby-Faced Assassin also earned his first NBA Finals MVP award. So, for Curry, one of his hands is getting heavy with big rings.

Curry’s dynamic play in leading the Warriors to a fourth NBA title in eight seasons is one of many reasons he was named as Sports Illustrated ’s 2022 Sportsperson of the Year . The annual award is given to a coach, team or athlete who best represents the spirit of sportsmanship, character and performance. Curry, who previously shared the award with the 2017–18 Warriors, joins LeBron James, Tom Brady and Tiger Woods as the only multiple-time winners.

SI’s Michael Rosenberg wrote that the two-time MVP “pulls off one of the toughest tricks in sports” every day by passionately seeking “greatness without being consumed in it.” However, in 2022, his eminence extended well beyond 23 feet, nine inches from the basket.

Rosenberg: Stephen Curry Is SI’s 2022 Sportsperson of the Year

In addition to the NBA title and Finals MVP honors, he graduated from Davidson College, 13 years after leaving for the NBA. He broadened his charitable reach, spending more than $2.5 million on literacy-focused grants, giving out 500,000 books and serving more than 25 million meals to food-insecure children. He also supplied financial support for the men’s and women’s golf teams at Howard University, a historically Black school, and started the Underrated Golf Tour. The circuit aims to bring more diversity to the sport.

If all that wasn’t enough, the 34-year-old co-chairs Michelle Obama’s When We All Vote initiative. Not only is he one of the greatest shooters in basketball history, Curry is a college graduate and a generous philanthropist constantly mastering his craft both on and off the hardwood.

The Golden State Warriors have been a powerhouse in the NBA over the last decade in large part due to the excellence of star point guard Steph Curry. This makes the news that they received on Sunday about Curry particularly devastating. Curry left Saturday’s matchup against the Dallas Mavericks after Dallas point guard McKinley Wright Read more... The post Warriors receive terrible Steph Curry update appeared first on The Comeback: Today’s Top Sports Stories & Reactions.
SAN FRANCISCO, CA・2 DAYS AGO
Larry Brown Sports

Kyrie Irving terrorized Joe Tsai’s Brooklyn Nets for nearly four seasons, and it sounds like the Nets owner got the last laugh with the problematic guard. On Friday we learned that Irving wanted to be traded by the Nets ahead of Thursday’s deadline. Immediately, there was speculation that Irving would end up with the Los... The post Nets owner got last laugh with Kyrie Irving through petty move appeared first on Larry Brown Sports.
NEW YORK CITY, NY・2 DAYS AGO
Sports Illustrated

Things got personal on ‘First Take’ between Smith and Williams.
1 DAY AGO
Sports Illustrated

In an interview with Sports Illustrated, Parker reflected on her pioneering role, her decision to join the Aces, the Kyrie Irving trade and working with Shaq.
TENNESSEE STATE・16 HOURS AGO
OnlyHomers

There have been a number of sad reports coming out of the world of professional wrestling in recent weeks, with former stars passing away, both during their career and following it.
2 DAYS AGO
Larry Brown Sports

Patrick Mahomes might need to ask for a little forgiveness from his wife. Mahomes spoke with the media on Monday during Super Bowl Opening Night ahead of Sunday’s big game between his Kansas City Chiefs and the Philadelphia Eagles. The Chiefs quarterback was asked about his Valentine’s Day plans considering the holiday is on February... The post Patrick Mahomes might be in trouble with his wife over 1 comment appeared first on Larry Brown Sports.
KANSAS CITY, MO・12 HOURS AGO
OnlyHomers

World Wrestling Entertainment (WWE) star Hulk Hogan is "paralyzed" from the waist down, at least according to another legendary wrestler, it has been revealed. Kurt Angle, speaking on an episode of his top-rated podcast on Sunday, said that he and Hogan, 69, spoke backstage when they both appeared at the 30th Anniversary special for WWE’s program “Monday Night Raw.”
2 DAYS AGO
OnlyHomers

The wrestling world suffered a significant loss on Monday, February 6, 2023, when it was announced that a former professional wrestler has passed away. According to Shantel Potter Brun on Facebook, her uncle, and five-time Heavyweight Champion, "Thunderblood" Charles Norris passed away at age 57.
1 DAY AGO
Sports Illustrated

Los Angeles made its pitch to try and reunite LeBron James with Kyrie Irving, but Brooklyn rebuffed with a proposal that wasn’t consummated.
BROOKLYN, NY・2 DAYS AGO
Sports Illustrated

Football didn’t work out for Bron Breakker but he’s an emerging star in WWE.
GEORGIA STATE・14 HOURS AGO
Sports Illustrated

LeBron’s Record-Breaking Moment Will Be Fit for a King. Kareem’s? It Was, Um, Cute.

James needs just 36 points to eclipse Abdul-Jabbar’s scoring record, a moment that will come soon—and with considerably more pomp and circumstance than in 1984.
UTAH STATE・1 DAY AGO
Sports Illustrated

The NBA’s Next All-Time Scoring Champ Could Be ...

Who could eventually surpass LeBron James, if anyone?
1 HOUR AGO
Sports Illustrated

With LeBron James becoming the NBA’s all-time leading scorer, we look back at some of his best photos throughout his historic career.
2 HOURS AGO
Sports Illustrated

Report: Nets Not Planning to Trade Kevin Durant Ahead of Trade Deadline

The Lakers Need an Aggressive Plan B

Acquiring Kyrie Irving was Los Angeles’s preferred path forward. That didn’t work, but the Lakers can’t settle for moving on with what they have.
LOS ANGELES, CA・1 DAY AGO