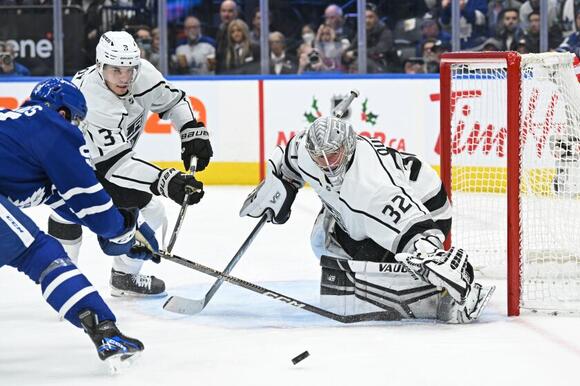 Mitch Marner extended his franchise-record points streak to 21 games with a second-period goal and the Toronto Maple Leafs beat the Kings 5-0 on Thursday night at Scotiabank Arena.

Marner gave Toronto a 4-0 lead with his 11th goal of the season, scoring on a slap shot after a Kings turnover inside its blue line. The puck bounced off the side board right to Marner’s stick. He skated in on the right wing and fired one into the upper opposite corner of the net.

“It’s a nice clap bomb he has there,” Maple Leafs center Auston Matthews said. “I didn’t know he could shoot the puck like that.”

Matthews, Pierre Engvall, David Kampf and William Nylander also scored for Toronto, which scored its first three goals in a span of 66 seconds of the second period. Ilya Samsonov made 29 saves for his first shutout with the Maple Leafs and the seventh of his career.

Early in the third period, Engvall received a five-minute match penalty after his stick caught the back of the neck of Kings defenseman Sean Durzi while the two had tussled during play.

But the Kings couldn’t take advantage. They did appear to score on a shot by Adrian Kempe that was tipped in by Kevin Fiala with 15:17 to play, but after the Maple Leafs challenged, it was determined the Kings had entered the zone offside and the goal was nullified.

The Kings dropped to 14-11-4 with their seventh loss in 10 games but are still in third place in the Pacific Division behind Seattle and Vegas.

The Kings continue their six-game trip with back-to-back games Saturday at Montreal and Sunday at Columbus.

The Chicago Bulls’ season-long search for answers continues Saturday when they visit the Orlando Magic to wrap up a three-game
CHICAGO, IL・44 MINUTES AGO
Los Angeles Times

Adrian Kempe had a short-handed goal and an assist, Pheonix Copley made a career-best 45 saves, and the Kings held off the Florida Panthers 4-3.
LOS ANGELES, CA・4 HOURS AGO
Los Angeles Times

All-Star forward Anthony Davis rolled his ankle during the Lakers-Spurs game Wednesday to the gasps of fans, and his coach, before shaking it off.
LOS ANGELES, CA・1 DAY AGO