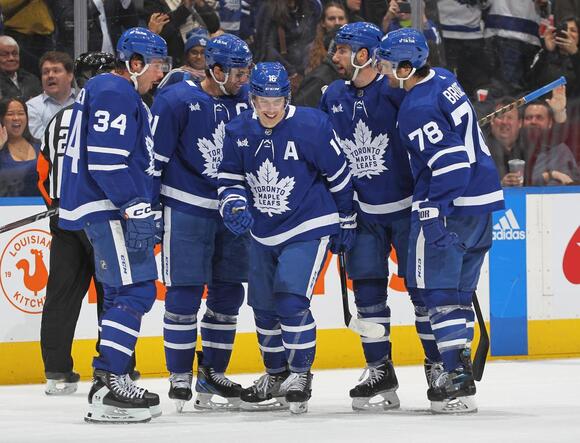 Mitch Marner extended his franchise-record points streak to 21 games with a second-period goal and the Toronto Maple Leafs beat the Los Angeles Kings 5-0 on Thursday night.

Marner gave Toronto a 4-0 lead with his 11th goal of the season, scoring on a slap shot after a Los Angeles turnover inside its blue line.

Marner became the 10th player in the past 35 years to string together a streak of 21 or more games. He has 10 goals and 16 assists during the run.

Auston Matthews, Pierre Engvall, David Kampf and William Nylander also scored for Toronto. Ilya Samsonov made 29 saves for his first shutout with the Maple Leafs and the seventh of his career.

Los Angeles dropped to 14-11-4 with its seventh loss in 10 games. Kings goalie Jonathan Quick made 36 saves.

Kings: At Montreal on Saturday night.

Flames bust out in first period to handle Kraken, 5-2

Blake Coleman and Elias Lindholm each had a goal and two assists as the Calgary Flames defeated the host Seattle
SEATTLE, WA・45 MINUTES AGO
News 8 WROC

James is the first American-born black player in Amerks and NHL history
ROCHESTER, NY・36 MINUTES AGO