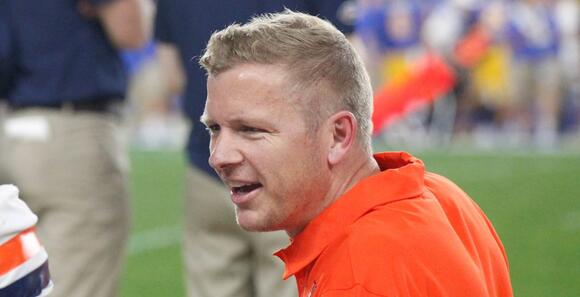 According to a report from Matt Zenitz of On3 Sports , Syracuse football has already replaced Robert Anae as offensive coordinator. Jason Beck, who was the quarterbacks coach this past season, is expected to lead the Orange offense moving forward according to the report.

This is much needed positive news after quite the day for the football program and its fans. After losing defensive coordinator Tony White to Nebraska in the afternoon, offensive coordinator Robert Anae left in the evening. The promotion of Beck means retaining one of its top coaches on the staff and someone who was going to be an offensive coordinator in the near future anyway. Now it is at Syracuse.

Beck has earned the praise and respect of coaches across the country with his ability to develop quarterbacks. He did so at both BYU and Virginia, turning unheralded recruits into professional caliber quarterbacks. During his one season at Syracuse, he oversaw the development of Garrett Shrader. Shrader showed significant improvement under Beck's guidance and those two will continue to work together this offseason.

Darrell Gill Commits to and Signs With Syracuse

Class of 2023 Humble (TX) Atascocita wide receiver Darrell Gill has committed to and signed with Syracuse on National Signing Day. Gill officially visited the Orange this past weekend where he picked up an offer, and inked just days later. He picked Syracuse over offers from Purdue, Washington ...
SYRACUSE, NY・23 HOURS AGO
AllSyracue

Syracuse football's 2023 schedule was released as part of the ACC's schedule reveal Monday night. While the opponents were previously known, the dates and order was not. The schedule is as follows: Note: All caps denotes home game in the JMA Wireless Dome.   Saturday, September 2nd: ...
SYRACUSE, NY・2 DAYS AGO
AllSyracue

Syracuse men's soccer has signed head coach Ian McIntyre to a "long term contract extension," the program announced on Wednesday. McIntyre oversaw the Orange's first National Championship this past season and has been the head coach for 13 years. Details of the extension were not provided as ...
SYRACUSE, NY・19 HOURS AGO
AllSyracue

Class of 2024 quarterback Maurice Williams visited Syracuse over the weekend for Junior Day.  "Great visit," Williams said. "I got to take some pictures in some gear, break down the offensive scheme the Cuse runs, talk to a lot of the coaches. All the coaches love me. Me and coach Beck spoke. ...
SYRACUSE, NY・2 DAYS AGO
AllSyracue

Syracuse forward Benny Williams "took a personal day" according to head coach Jim Boeheim, which led to him not being at the JMA Wireless Dome for the Orange's 67-62 loss against #7 Virginia. Boeheim added that Williams will be back at practice on Wednesday.   Williams began the season as ...
SYRACUSE, NY・2 DAYS AGO
AllSyracue

Syracuse, Pittsburgh to be Played at Yankee Stadium

Virginia’s seventh straight win would mean Syracuse’s third straight loss. Head Coach Jim Boehem says the team played their best game of the season by holding the seventh-ranked team in the country to just a five-point difference, losing 67-62. “Virginia is really good. They beat us just like they ...
SYRACUSE, NY・2 DAYS AGO
AllSyracue

Syracuse Loses Another Close One as Virginia Tops the Orange

In a back and forth game, missed free throws from Syracuse and key shot making from Virginia cost the Orange a win against the seventh ranked Cavaliers. Virginia knocked off Syracuse 67-62 in the JMA Wireless Dome Monday night. With the loss, the Orange drops to 13-10 (6-6) and has now lost four ...
SYRACUSE, NY・2 DAYS AGO
AllSyracue

Nathan Opoku. He is from Accra, Ghana before he was playing with NAIA program Lindsey Wilson College in Kentucky. After 19 goals in 19 matches there, he came to Syracuse to help fill the void of losing Deandre Kerr. As just a Sophomore he helped lead Syracuse to their best record in program history ...
SYRACUSE, NY・1 DAY AGO