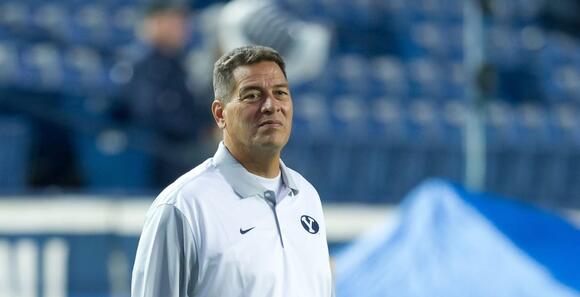 Anae joined Syracuse this past offseason after the Orange parted ways with Sterlin Gilbert after multiple subpar offensive seasons. Anae had been extremely successful as an offensive coordinator at both BYU and Virginia under Bronco Mendenhall. When Mendenhall abruptly retired from the Virginia head coaching position, Anae became available and Syracuse moved quickly to bring him aboard.

He paired with Jason Beck, quarterbacks coach, to bring life to the Syracuse offense. Beck had been with Anae at both previous stops and continued his successful development of signal callers this season. Garrett Shrader showed tremendous growth under Beck.

After one season, however, Anae is headed elsewhere. Not just anywhere, but to an ACC rival.

More from Anae's bio on Cuse.com:

The architect of the unit that ranked third in the FBS in total offense last season at Virginia, Robert Anae was hired as Syracuse’s offensive coordinator in December of 2021. He brings nearly 40 years of experience develiping some of the nation’s top offenses to ‘Cuse for the 2022 season.

“Coach Anae has proven to lead a number of successful offenses in his career, including in the ACC,” said head coach Dino Babers when Anae was hired in December. “We’re excited to welcome him and his family to Syracuse and look forward to him getting started with our team.”

Anae joins the Syracuse staff having spent 15 seasons as an FBS offensive coordinator, including the last six in the ACC at Virginia and nine at BYU, with additional stops at Arizona, Texas Tech, UNLV, Boise State, Ricks College and Hawaii in his coaching tenure.

“I want to thank Dino Babers for this opportunity,” Anae said at the time of his hiring. “He’s a friend I’ve known for many years and look forward to working alongside a great offensive mind that as an offensive staff we can use at our disposal.”

A three-time nominee for the Frank Broyles Award as the nation’s top assistant coach, Anae’s offense has finished in the top-25 of 10 different NCAA offensive statistical categories a total of 56 times in his 15-year tenure as an OC, including 21 top-10 rankings.

Syracuse basketball head coach Jim Boeheim discussed his potential retirement and the state of college basketball with ESPN's Pete Thamel. Below are the notable exerts from the article, which you can read in its entirety HERE.  ON HIS RETIREMENT TIMEFRAME Thamel notes that Boeheim told ESPN ...
SYRACUSE, NY・15 HOURS AGO
AllSyracue

Syracuse women’s basketball sweeps this season’s series over Boston College with Sunday's 79-72 win, making it Head Coach Felisha Legette-Jack’s first season sweep over an ACC opponent. Although the Eagles scored first, the Orange scored 11-straight in the first minutes of the game. The Eagles then ...
SYRACUSE, NY・10 HOURS AGO
AllSyracue

In front of about 3,500 fans, the Syracuse Orange started their season off with a 7-5 win over the defending America East champions, the University of Vermont Catamounts. Leading the way for the Orange offense was Finn Thomson, the freshman out of Toronto. Thomson finished the game with three ...
SYRACUSE, NY・1 DAY AGO
AllSyracue

Takeaways From Syracuse's Win Over Vermont

The 2023 Syracuse men’s lacrosse season started on a good note on Saturday with a 7-5 victory over the University of Vermont Catamounts. It was mostly a battle of defense that resulted in a low-scoring affair, with only 12 goals being scored between both teams. Each side of the ball had some great ...
SYRACUSE, NY・1 DAY AGO
AllSyracue

At a point in the season where any result counts, The Orange are in the hunt for a positive result after suffering a loss and a tie to CHA opponent Mercyhurst. Syracuse was in action tonight against another conference foe in Penn State, who currently sit a top of the conference and are ranked 10th ...
SYRACUSE, NY・2 DAYS AGO