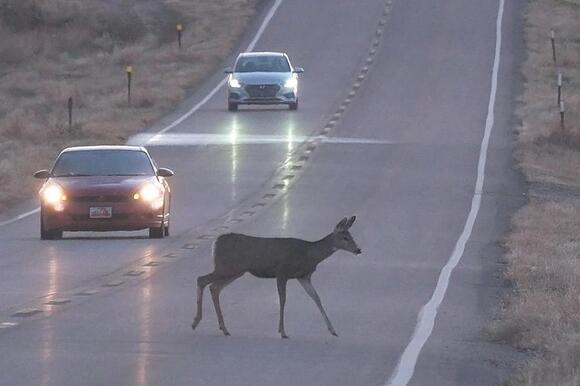 SALT LAKE CITY, Utah ( ABC4 ) — The Division of Wildlife Resources has recently partnered with the Utah Department of Transportation to release a new app called the Utah Roadkill Reporter with the goals of reducing wildlife-vehicle collisions and building wildlife crossing structures on roads.

It uses GPS tracking technology to collect high-accuracy data on dead animals on the road so that UDOT and DWR employees can then remove those carcasses quickly.

2 UHP cars hit in multi-vehicle crash on I-15

“It is important for us to understand how many wildlife-vehicle collisions occur in Utah,” said Blair Stringham, DWR Utah Migration Initiative Coordinator. “This new app will allow us to know exactly when and where collisions occur, which will help us identify hot spot areas on Utah highways. We can then work with UDOT and other partners to install underpasses, fencing, wildlife overpasses and other structures to reduce collisions in those areas and keep wildlife and people safe.”

The app will have access to all the reported cases, carcasses that have been picked up and routes contractors are using to complete the pick-up.

Aside from reducing wildlife-vehicle collisions, the data will also benefit the Utah Wildlife Migration Initiative in understanding the annual migration patterns of animals in Utah. The initiative also tracks animals that are wearing GPS devices and fish tagged with implanted transmitters.

Using the data, biologists will also be able to determine areas in which animals spend most of their time and subsequently perform improvements in those habitats.

“For years, wildlife carcass data has been a key factor in UDOT and DWR’s decision-making process to make Utah roads safer and improve wildlife population health,” said UDOT’s Natural Resource Manager Matt Howard. “The new app will make it easier for the public to use and will give us more and better information to guide future mitigation efforts.”

The app was funded by DWR and UDOT. It is available to download on Google Play and Apple App Store .

A herd of elk caused a little bit of traffic trouble Thursday afternoon when they congregated right next to Interstate 80 and later ran across Foothill Drive.
UTAH STATE・14 HOURS AGO
ABC4

We kick off another stretch of active skies in Northern Utah thanks to a series of weather systems moving through our region.
UTAH STATE・4 HOURS AGO
ABC4

With the near-constant stream of snowstorms coming through our mountains, the numbers keep going up and up.
UTAH STATE・1 DAY AGO
ABC4

A Utah man is facing 11 charges after allegedly causing a multi-car wreck on Interstate 80 that led to the deaths of five Arkansas students on Sunday, Jan. 22.
SHERWOOD, AR・16 HOURS AGO
ABC4

A 66-year-old man has been pronounced dead after a head-on crash with a semi-truck on Tuesday.
BLACKFOOT, ID・2 DAYS AGO
ABC4

For the past few weeks, our state has been in a constant pattern of a day or two of moisture and then a day or two of dry weather. This has been great for helping to reduce our drought conditions, and the snow has been wonderful for more than just the skiers.
SALT LAKE CITY, UT・2 DAYS AGO
ABC4

The National Weather Service has issued a Winter Weather Advisory for the northern Wasatch Mountains, including Logan Summit and Mantua.
MANTUA, UT・15 HOURS AGO
ABC4

By tomorrow, the weather pattern will become more active in the northern half of the state as we see a series of systems move our way. Between Friday and Saturday, we'll have a chance for isolated to scattered showers with most of the wet weather being snow.
UTAH STATE・17 HOURS AGO
ABC4

How California, Arizona and other states are trying to generate a whole new water supply

If implemented on a wide enough scale, recharge projects hold the potential to bolster water security in drought-stricken regions while improving the health of the environment.
ARIZONA STATE・4 DAYS AGO
ABC4

Utah lawmakers are considering a bill that could help protect victims of domestic violence by mandating new requirements for police responding to these calls.
UTAH STATE・1 DAY AGO
ABC4

Light snow showers and very cold temperatures are in store today as another trough of low-pressure slides through the Beehive State.
UTAH STATE・5 DAYS AGO
ABC4