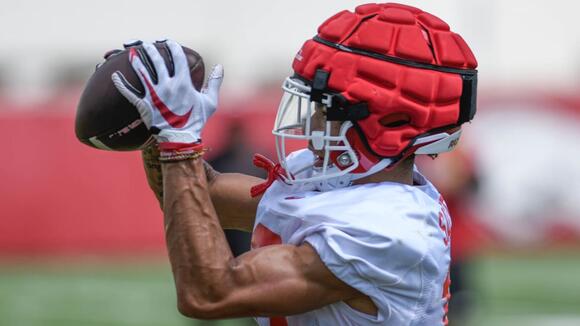 FAYETTEVILLE, Ark. – It's hard not to get cynical about minor bowl games, especially on the verge of a world where having 12 teams in the playoffs will continue to devalue them.

It's also hard at times seeing NIL as nothing more than a way for schools with wealthy fan bases to buy the best players their pocketbooks will deliver.

But then something comes along to remind you that hidden within all those cheap pop talking points is a bit of humanity and purpose.

Earlier this afternoon, wide receiver Isaiah Sategna, who is expected to play an increased role against Kansas in the Liberty Bowl, reminded everyone of what is truly great about Memphis, bowl games and NIL.

Cancer research has come a long way. That's the only reason you are reading these words today.

However, I can say with 100 percent authority that the battle is mentally taxing, immensely painful, financially crushing, and at times one of the most lonely experiences possible.

That's reality through the eyes of a grown man. Project all of that on a child, especially a small child from a family that is living paycheck to paycheck, and it's an even darker reality.

I thank God each day that it was me going through that fight and not one of my children. I also thank God that it happened now and not 10 years ago when my goal was to sacrifice as much as I could to keep food on the table.

But other families aren't so lucky. For so many, the only source of light is St. Jude's.

Finding out about a cancer diagnosis is jarring to the system. Everyone thinks the same thing when that awful word rolls off a doctor's tongue and it's hard to shake.

The last thing a mother or father want to stress about is the need to pick up another job or two to cover the bills, afford hotel stays and the high cost of having to eat out all the time so at least one member of the family can be near their child while he or she goes through treatment.

St. Jude's puts families where they need to be.

There are no medical bills to pay. The family doesn't have to pay for a place to stay or food to eat.

Their job is to be there loving on their child, providing encouragement and comfort.

Fighting cancer is 80% mental. A child left alone in this fight has a dramatically decreased chance of making it through.

What St. Jude's is doing is as close to the work of angels as humans can perform.

The money that goes to St. Jude's also goes toward research. As we all learned during COVID, when research is shared worldwide, advancement can happen at a dramatically fast pace.

There are greedy people and organizations out there. There's a lot of money in ultimately finding a cure to cancer.

That drive for money provides a drive not to share.

Helping St. Jude's means investing in a potential cure everyone can access since all their research is openly shared.

This particular site had 1.1 million readers last month and is on pace for more this month. That's quite a megaphone for Sategna's tweet.

Tens of thousands of others see every tweet Sategna posts simply because he is a Razorback.

Some may bristle at the idea that a portion of the donation goes toward a college athlete who is using his platform to get the word out. However, if you simply think how exponential the reach has been because of what a wide receiver with world class speed did to take advantage of his platform, it's easy to see the value in Sategna's name, image and likeness.

The Arkansas fan base is powerful. Hog fans nearly single-handedly saved a family-owned Omaha based restaurant by buying Jello shots at an unnecessary rate during the College World Series.

Part of it was out of competitive fun, but it was also because Razorback fans love the feeling of coming together to make a difference.

Arkansas may be small, but it has a massive heart and Sategna is tapping into that.

It's also easy to see the immense intrinsic value of a bowl game between between a pair of 6-6 teams.

A trip to the Liberty Bowl on its surface is a chance for two programs to get extra work toward getting better next season and for one school to get a minor bump in momentum heading into next season.

However, thanks to the partnerships the Liberty Bowl has generated between St. Jude's and players like Sategna, its deeper meaning is an opportunity to save a life.

And there's nothing cynical about that.

STATUS OF TREVON BRAZILE UPDATED AND THE OUTLOOK ISN'T GOOD

Freeze gets hot, Tom Brady money in Arkansas, different kind of Coach at LSU, and Petrino lands his first QB at A&M
ALABAMA STATE・9 HOURS AGO
All Hogs

Razorbacks will need to be able to hold serve in Bud Walton and steal a road win against a daunting final stretch of the season
FAYETTEVILLE, AR・7 HOURS AGO
All Hogs

Five-star signee took to Instagram almost immediately after loss, also hinted at whether there will be a possible rematch with Davis next season
FAYETTEVILLE, AR・5 HOURS AGO
All Hogs

Don't be surprised to see Makhi and Mekhel Mitchell to handle Oscar Tshiebwe.
FAYETTEVILLE, AR・4 HOURS AGO
All Hogs