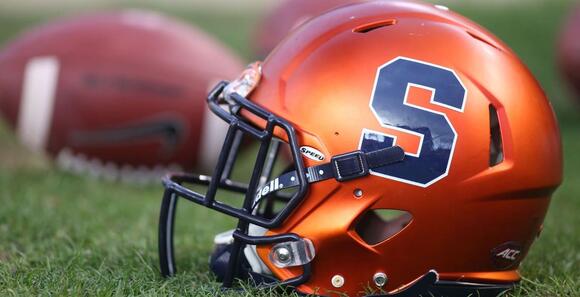 The news of White's departure came down Thursday afternoon and was a shock to many in Central New York. White had transformed the Syracuse defense from one of the worst in college football to one of the best.

Monroe has been with Dino Babers for the last decade, including his stops at Eastern Illinois, Bowling Green and now Syracuse. Monroe was promoted to Defensive Passing Game Coordinator last offseason. He is known as one of the best recruiters on staff as well.

More on Monroe from his Cuse.com bio :

A dynamic recruiter who has recruited and developed NFL talent, Nick Monroe enters his seventh season with the program and first in his elevated role of Defensive Passing Game Coordinator. He joined the staff in 2016 and served as Syracuse’s secondary coach for two seasons before narrowing his focus to the Orange’s safeties and nickelbacks in 2018 and safeties and rovers in 2020, before taking on his current role this season.

Monroe is known for his elite recruiting ability, bringing in and developing of Andre Cisco (Jacksonville Jaguars), Trill Williams (Miami Dolphins) and Ifeatu Melifonwu (Detroit Lions), the three defensive backs in the Orange’s 2021 NFL Draft Class that all went on to ink rookie contracts with the aforementioned teams.

Over the past five seasons, Monroe has co-directed a Syracuse pass defense that has thrived on creating turnovers. The Orange have intercepted 46 passes in 48 games (0.96 per game) since the start of 2018, including a streak of 17 straight games with a pick from Aug. 31, 2018 to Sept. 21, 2019. The streak tied for the third-longest in major college football since 2004.

In his current role of coaching safties and rovers, Monroe took a group that lost a pair of NFL DBs due to injury early in the season in 2020, turning to start three freshmen at the three spots. Ja’Had Carter became a Freshman All-American under his watch, finishing the year with 67 tackles and two interceptions. Rob Hanna also notched north of 50 tackles in his first season of college football.

The group excelled in 2021, as ‘Cuse put together its best total defense season in a decade, finishing second in the ACC and 19th nationally after allowing just 330 yards per game.

How to Watch Syracuse at Florida State

All Syracuse caught up with Elev8 Elite head coach Cory DeSanti, who is priority Orange target Marcus Adams' AAU coach, to discuss the recent official visit, an update on a decision timeframe and what type of player Syracuse is targeting. Of note, the Syracuse coaching staff was on point with its ...
SYRACUSE, NY・1 DAY AGO
AllSyracue

Class of 2024 forward Damarius Owens has trimmed his list to three schools, according to a report from On3. Owens, a 6-8 forward who plays at Western Reserve Academy in Ohio but is a Rochester (NY) native, is down to Marquette, Syracuse and Virginia Tech. He is also expected to make a final ...
SYRACUSE, NY・12 HOURS AGO
AllSyracue

Syracuse head coach spoke during the ACC Media Call on Monday to discuss a variety of topics. Below is a transcript of the questions he was asked and his responses.  Q: How do you think NIL has impacted college basketball? Boeheim: "I think the portal and NIL have had a huge impact. You're ...
SYRACUSE, NY・1 DAY AGO
AllSyracue

Syracuse won at Boston College 77-68 Saturday night. Here are five takeaways from the victory.  1. Jesse Edwards Edwards was nearly unguardable in this game. He finished with 27 points on 12-15 shooting to go along with seven rebounds and four blocks. Not only did he stay out of foul trouble ...
SYRACUSE, NY・2 DAYS AGO
AllSyracue

Syracuse women’s basketball sweeps this season’s series over Boston College with Sunday's 79-72 win, making it Head Coach Felisha Legette-Jack’s first season sweep over an ACC opponent. Although the Eagles scored first, the Orange scored 11-straight in the first minutes of the game. The Eagles then ...
SYRACUSE, NY・2 DAYS AGO