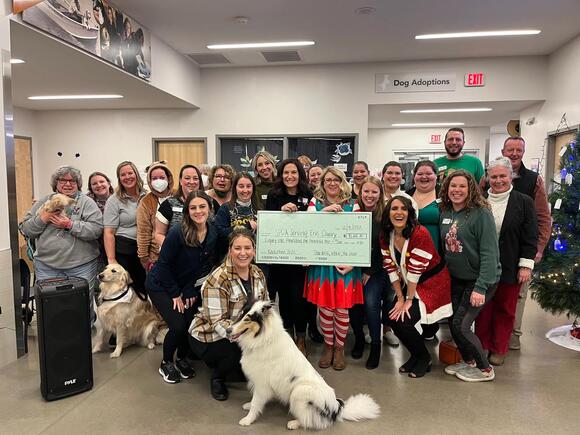 The tally was announced at 6pm Thursday as the radiothon concluded on WBEN, Star 102.5 and The Wolf, marking the 20th consecutive year of the agency's largest annual fundraising effort.

The SPCA receives no funding from Erie County and largely relies on support from the community for it's 24/7/365 mission to shelter, adopt, and provide care for animals while also carrying out an important law enforcement arm.

During the radiothon event, the SPCA was busy with adoptions that were being offered at half price and fees were waived for active military and veterans and their immediate families.

With depleted ranks of volunteer firefighters and first responders, a group of Erie County Legislators has introduced a bill to offer property tax relief for volunteers with at least two years of service.
ERIE COUNTY, NY・3 DAYS AGO
WBEN 930AM

The Alzheimer’s Association of Western New York is reminding those caring for Alzheimer’s patients of steps they can take to help keep patients from wandering off. A Niagara County woman died this week after wandering off.
NIAGARA COUNTY, NY・1 DAY AGO
WBEN 930AM

Mayor Byron Brown told WBEN, “The buck stops with me,” when it comes to the lack of communication to city residents about the lack of fluoridation in city water.
BUFFALO, NY・2 DAYS AGO
WBEN 930AM

The Buffalo Teachers Federation (BTF) have decided to increase the public awareness on their 3-year-long teacher’s contract negotiations with Buffalo Public Schools by placing billboards around the City of Buffalo.
BUFFALO, NY・2 DAYS AGO
WBEN 930AM

Every year, emergency calls for firefighters and other first responders continue to go up. However, the number of volunteer firefighters on staff and companies across the country continue to dwindle. Read more here:
SPRINGVILLE, NY・3 DAYS AGO
WBEN 930AM

Buffalo’s top cop says he agrees with Governor Hochul’s bid to roll back some of the bail reform. Hochul wants judges to have more leeway in determining whether to grant bail.
BUFFALO, NY・1 DAY AGO
WBEN 930AM

Almost simultaneously as the horrific Memphis Police beating video of Tyre Nichols was bring released Friday evening, Buffalo Mayor Byron Brown was presiding over a faith-based vigil on the steps of city hall.
BUFFALO, NY・1 DAY AGO
WBEN 930AM

More reaction comes pouring in to the revelation made regarding the lack of fluoride in the drinking water system in the City of Buffalo. This time, Erie County Legislator Howard Johnson chimes in with his thoughts on the matter. Read more here:
BUFFALO, NY・3 DAYS AGO
WBEN 930AM

From 'expressway' to 'parkway', preferred option reached on 198 re-imagining

The preferred option has been reached after community input for the future of the Scajaquada. The plan calls for the expressway to be replaced by a parkway and intersections to replace ramps.
BUFFALO, NY・2 DAYS AGO
WBEN 930AM

“Just hold on,” shouts a Buffalo Police officer shortly after 7pm on Christmas Eve as he responds to people stranded in a building near Fuhrmann Boulevard and Ship Canal Parkway.
BUFFALO, NY・2 DAYS AGO
WBEN 930AM

Buffalo Public Schools are putting out the call for substitute teachers. “We’re in desperate need,” said Phil Rumore, President of the BTF. It’s so bad, he said they often have to divide up classes to share teachers, making it very disruptive.
BUFFALO, NY・2 DAYS AGO
WBEN 930AM

Snowy start to Friday as typical January weather settles in

Buffalo, N.Y. (WBEN) - It is January after all and the weather is reflecting it with a snowy start to the weekend in Buffalo and Western New York.
BUFFALO, NY・2 DAYS AGO
WBEN 930AM

Darius Pridgen to not seek re-election on Buffalo Common Council

Buffalo Common Council President Darius Pridgen will not seek re-election once his term in office is up at the end of the year. Pridgen has served as the Ellicott District representative for 12 years in the council. Read more here:
BUFFALO, NY・4 DAYS AGO
WBEN 930AM

The Erie County Stadium Corporation, a subsidiary of Empire State Empire Development Corporation, unanimously approved a general project agreement on the $1.4 billion deal for a new stadium for the Buffalo Bills
ERIE COUNTY, NY・5 DAYS AGO
WBEN 930AM

Senator Chuck Schumer is urging movement to get a deal reached on a debt ceiling deadline. He says a default would be economically disastrous for the region.
BUFFALO, NY・4 DAYS AGO
WBEN 930AM

A 36-year-old Springville woman was arraigned on Wednesday morning in Springville Village Court in connection to a fire in the village late Monday night. Read more here:
SPRINGVILLE, NY・4 DAYS AGO
WBEN 930AM

The Buffalo Police Department announced Tuesday morning the arrest of a pair of men in relation to a search warrant executed this past Friday on the first block of Gorski Street. Read more here:
BUFFALO, NY・5 DAYS AGO
WBEN 930AM

A significant police presence Tuesday morning at Red Roof Inn on Flint Road. Police say a 27 year old man was found with a gunshot wound. He is at ECMC.
AMHERST, NY・5 DAYS AGO
WBEN 930AM

During a stop in Buffalo over the weekend, WBEN asked New York Governor Kathy Hochul if the deadlines for the phasing out of natural gas energy and appliances she outlined in her State of the State address would hold firm.
BUFFALO, NY・6 DAYS AGO