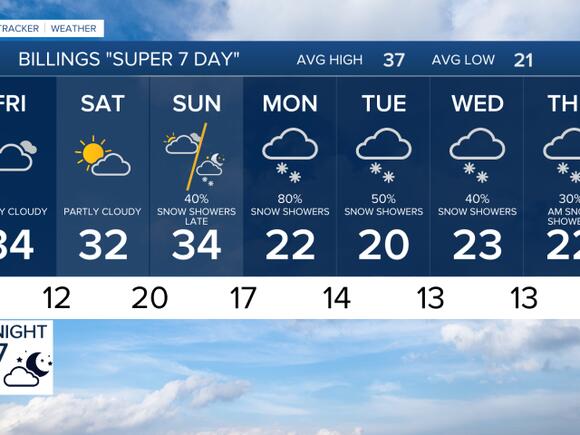 After a relatively quiet weather weekend, confidence is increasing that colder temperatures and potentially heavy snow will take over next week. It could start late Sunday.

A winter storm system will impact the Rockies and northern Plains early next week. While there is uncertainty in the details, the chances for 4 to 8 inches of snow from Billings westward, and perhaps as much as a foot in some places to the east of Billings has been indicated so far.

This has the makings of a significant winter system, so check back for details.

Winds stay strong in the Beartooth foothills and the Livingston / Nye area Thursday night. Gusts to 60 mph are possible.

A disturbance Friday reduces the winds but brings clouds and some snow to the mountains and foothills. A few lower-elevation showers of flurries are possible over a widespread area.

High temperatures remain in the mid-20s to mid-30s and lows in the teens over a widespread area each day through Sunday. Expect teens and 20s for highs when the snow arrives.

Very windy conditions will continue in the Upper Yellowstone Valley and along the Rocky Mountain Front through Saturday. Mild temperatures will prevail through the period.
BILLINGS, MT・13 HOURS AGO
Q2 News

Daytime and nighttime temperatures will be staying above the norm through late next week. Windy conditions remain to the west through tomorrow.
BILLINGS, MT・1 DAY AGO
Q2 News

It is Groundhog day, and Punxsutawney Phil said six more weeks of winter weather. But for the next week, mild weather is the story in our area.
BILLINGS, MT・1 DAY AGO
Q2 News

Happy Groundhog Day! The warm up continues as daytime highs push into the 40s heading into the weekend.
BILLINGS, MT・1 DAY AGO
Q2 News

The warming trend continues today as daytime highs push above the freezing mark for most of the area.
BILLINGS, MT・2 DAYS AGO
Q2 News

While the wind has backed off near the mountains to the west, it will continue to gust for a few days. Eastern Montana gets cold Thursday.
BILLINGS, MT・2 DAYS AGO
Q2 News

Travel near the mountains west of Billings is largely shut down until Wednesday afternoon. Northeast Montana has another round of cold. But the trend is warmer.
BILLINGS, MT・3 DAYS AGO
Q2 News

Gusty winds stick around for now, especially closer to the mountains. But temperatures are already showing signs of warming.
BILLINGS, MT・4 DAYS AGO
Q2 News

With the cold air and fresh snow, it will not take much wind to knock wind chills to -20 or colder Monday morning. But increasing winds by Tuesday could cause blowing snow...and a warm up.
BILLINGS, MT・5 DAYS AGO
Q2 News

Q2 Billings Area Weather: Dangerously cold this morning but warming up this week

It will be brutally cold this morning, but slowly getting warmer. We'll get back above the freezing mark by mid-week with a dry week on the way.
BILLINGS, MT・5 DAYS AGO
Q2 News

In Billings, police issued 268 red light citations in 2022 and 169 warnings, and they say there are far more people breaking the red-light law.
BILLINGS, MT・3 DAYS AGO
Q2 News

Dolly Moore wrote on Twitter that she saw a jet go by and then heard what she described as an explosion in the sky.
BILLINGS, MT・10 HOURS AGO
Q2 News

Scott attributes the growth to the COVID-19 pandemic, when people had fewer options as to where to vacation.
BILLINGS, MT・3 DAYS AGO
Q2 News

Tony Seitz started crafting unique beehive boxes after taking up beekeeping with his son. He has been retired since 2009 and enjoys creating the colorful boxes as a hobby.
BILLINGS, MT・2 DAYS AGO
Q2 News

The Montana Women’s Run began in 1982 with 200 registrants and celebrated last year with over 4,600 women participating virtually around the world.
BILLINGS, MT・1 DAY AGO
Q2 News

When you think of America's best BBQ, Roundup might not be the first town that comes to mind. But Roundup suddenly has a reputation for mouthwatering food.
ROUNDUP, MT・5 HOURS AGO
Q2 News

“All of sudden it was this big explosion in the sky and all this debris started slowly coming down like it was big smoke," she said.
BILLINGS, MT・8 HOURS AGO
Q2 News

“There’s the thought that we want to do the marathon loop, you know connect the Rims to the river and get all that going so there’s plans in the works for all of that,”
BILLINGS, MT・6 DAYS AGO
Q2 News

Dolly Moore wrote on Twitter that she saw a jet go by and then heard what she described as an explosion in the sky.
BILLINGS, MT・10 HOURS AGO